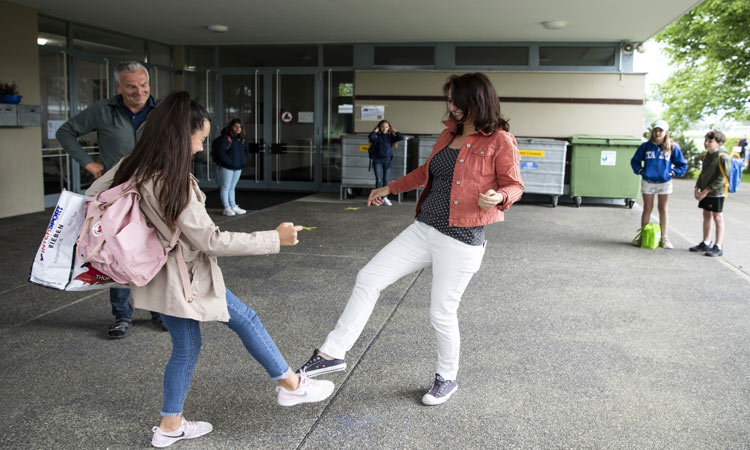 Pupils toted their backpacks for the first time since March in France and the Netherlands as primary schools partially reopened, with strict measures in place to prevent a second wave of the pandemic. 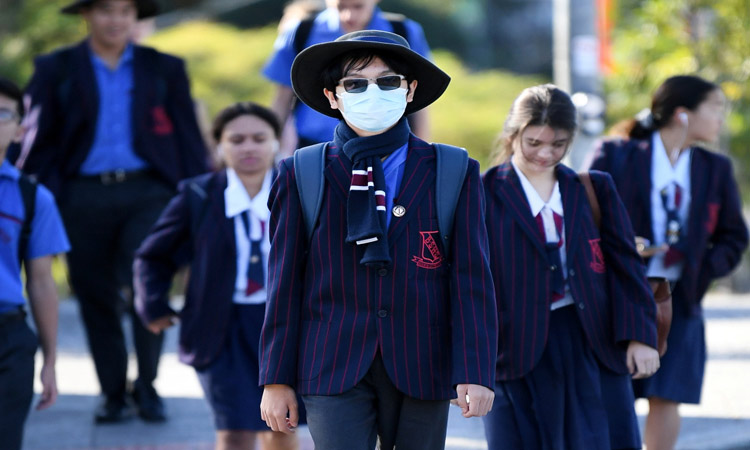 Students, including one wearing a protective face mask, arrive for the first day of face-to-face schooling in Brisbane. Reuters

As wider lockdown measures eased across the continent, schools also reopened their doors in Switzerland and the Balkans, while secondary schools in Greece were coming back to life.

“The children were really looking forward to coming back to school. They were jumping with joy when they saw their friends again, they were very happy,” 43-year-old Manon told AFP as she dropped off her three children at Willemspark primary school in The Hague.

“It’s good for them. We’ve been through a unique period... they liked the free time but of course they missed their friends a lot, and the structure that schools give them,” added the Dutch healthcare worker, who asked that her surname not be used.

She added that the family “had to get up early, like we did before.” 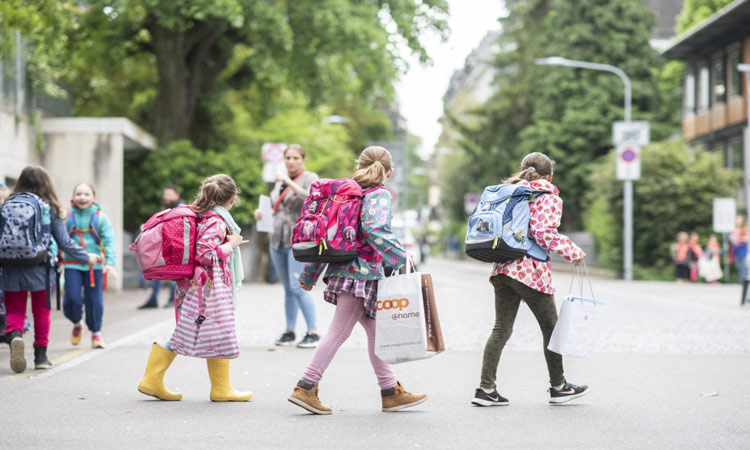 Girls arrive at school after the public shutdown because of the coronavirus pandemic, at the Hutten schoolhouse in Zuerich. AP

To prevent any resurgence of the virus, Dutch schools were allowing only half the normal number of children in at one time, with children either attending morning or afternoon sessions, or coming in on alternate days.

Measures to disinfect schools were also being taken but Manon said “luckily the children can go near each other without having to respect the 1.5-metre (social distancing) rule. They really appreciate that, they can touch and play games without worrying.”

Scandinavian countries and Austria led the way with school reopenings earlier this month, partly on the grounds that children appear less susceptible to the disease. 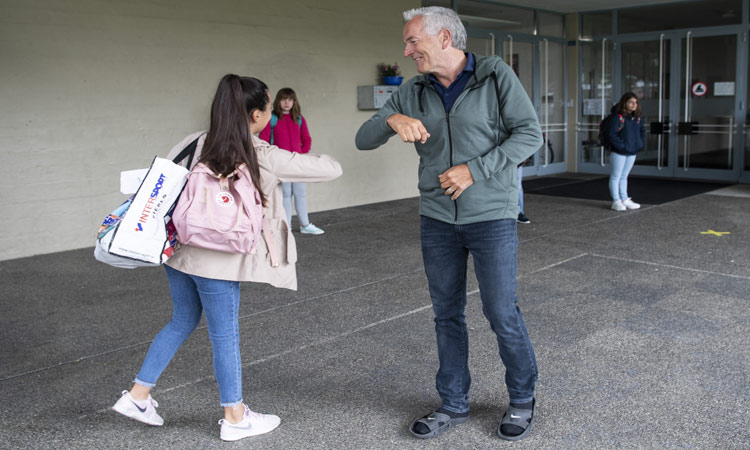 But there are still worries that Monday’s wave of reopenings has come too soon.

French President Emmanuel Macron’s decision to reopen schools has sparked criticism, even in regions where the number of cases is especially low, over fears it will cause a new spike in infections.

Italy and Spain, hit hard by the coronavirus, are among at least half a dozen countries that have cancelled class until September. Britain has said some primary school students may be able to return from June.

In Greece, where only students in the final year of secondary school are returning on Monday, there were similar worries.

“I won’t go. Most of the pupils I know won’t go,” Anastasia Kyriazis, a 17-year-old pupil from Nea Manolada in western Greece, told AFP.

“If we were to return we would attend classes for about a month. I prefer to stay home and study ahead of the exams.” At the Ninth Athens high school in the heart of the Greek capital few students were wearing masks. Small groups of students appeared happy to see each other again after the break.

In Switzerland, the atmosphere was similar to after the long summer holidays − albeit with schools reopening with half groups, and with extra hygiene measures and social distancing. 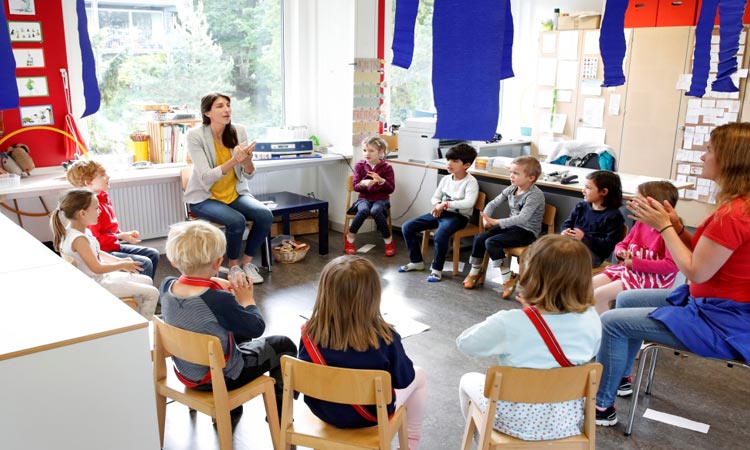 Children listen to the explanations of teacher Angela Melad on how to wash their hands at the KiGa Hutten kindergarten. Reuters

At one Geneva school some small children were in tears as they had to leave their parents’ arms, an AFP reporter saw. Parents weren’t allowed to go into the playground with their children, and police standing nearby enforced the rules.

Many schools were also returning across the Balkans.

In Croatia, nurseries and schools for children aged six to 10 were allowed back on an optional basis, for example if both parents work outside home and have no other means to take care of their child. Class sizes are also halved. 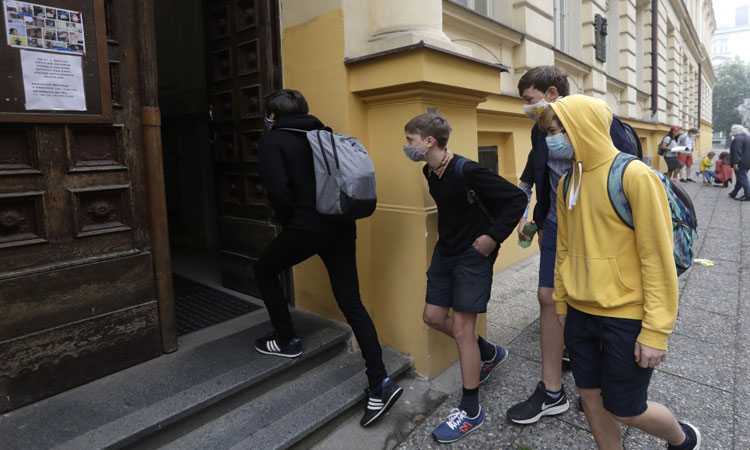 However the move sparked a heated debate as the responsibility was put on parents, while many warned that it would be impossible for children and teachers to follow social distancing regulations.

Serbian primary schools and nurseries were also reopening on Monday but on a similarly optional basis and with restrictions. Children also required a medical certificate to return.

Olivera Zubic, 37, who runs a small private primary school in Belgrade, said around a third of her pupils were expected to return.

“We’ve made all the preparations and the parents will come at fixed times, one couple by one. They will be met by a nurse who will measure their temperature and their childrens’,” she said.

“We’re ready but it remains to be seen how it will work in practice.” 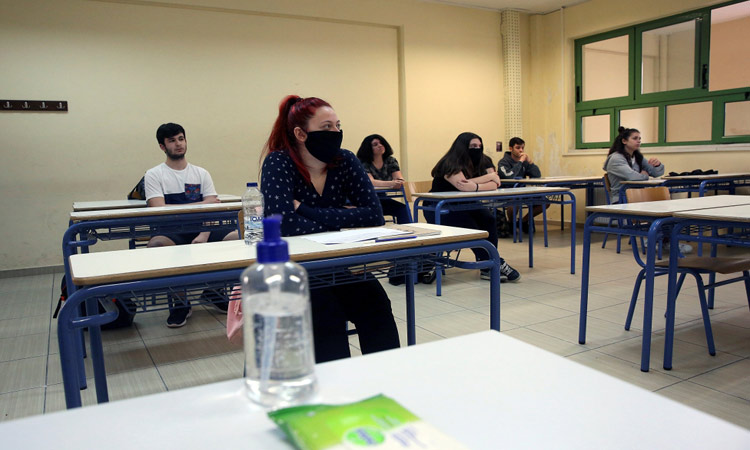 Students of the final year of high school wear protective face masks during a class on the first day of easing of lockdown in Athens. Reuters

Meanwhile, schools also reopened on Monday in the West African state of Benin, but many students and their parents worried that mask-wearing and social distancing rules would fail to keep coronavirus at bay.

“The virus is still present and they’re making us attend classes,” complained Merveille Gbaguidi, a high school student in the capital Cotonou. “They could have let us stay home.”

Benin is among a growing number of African nations relaxing measures that have battered their fragile economies and large numbers of poor. 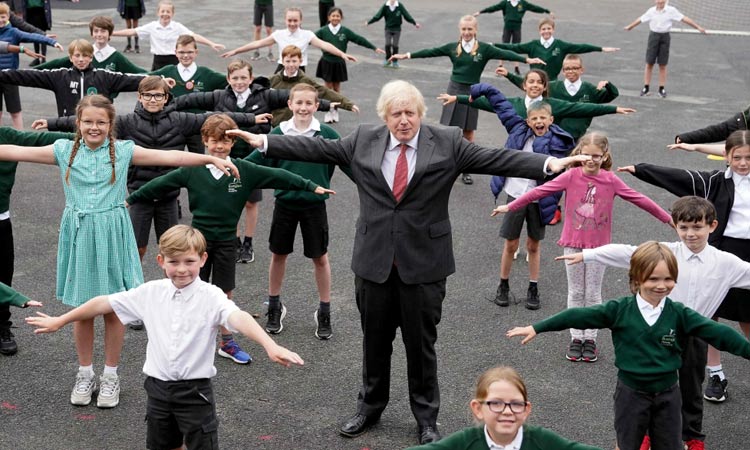 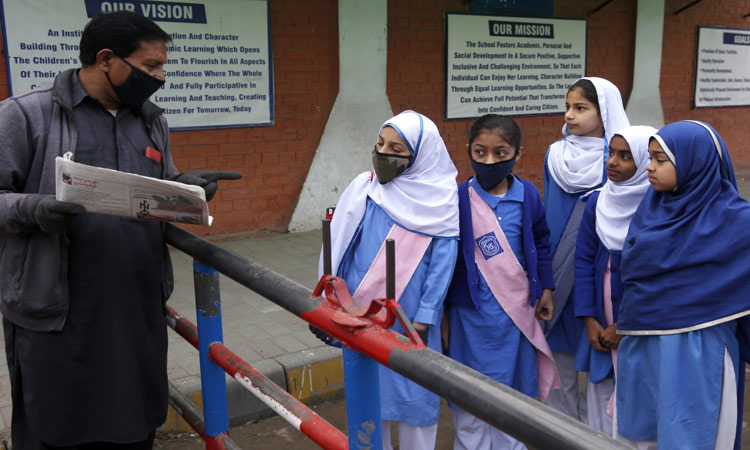 Federal Education Minister Shafqat Mahmood announced that exams scheduled for March are being delayed till May and June. The minister held a meeting with private school association representatives on reopening schools.