First flight to land in Kerala today as evacuation begins 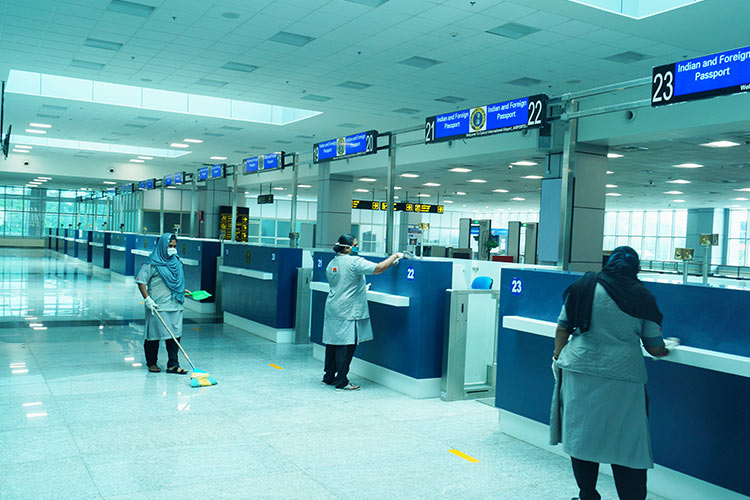 Kerala has made some 13,000 quarantine beds, 8,000 of them in the port city of Kochi, as Air India starts its biggest evacuation since the 1990 invasion of Kuwait.

Authorities in the southern state, home to a significant chunk of emigrant workers from India, say they are ready to receive any number of evacuees.

Hospitals are also ready to treat those who develop symptoms and get tested positive for the virus during their journey or while in quarantine.

The first flight carrying around 200 passengers from Abu Dhabi will touch down at the Cochin airport at 9.40 pm Thursday, an official communique said.

The flight from Dubai will land at Calicut airport an hour later.

According to initial plans, the national carrier will airlift 2,100 Indians on the first day to Cochin, Calicut, Bombay, Delhi, Hyderabad, Ahmedabad and Srinagar.

In the first week, it will airlift 14,800 people from Saudi Arabia, Qatar, the UK, Singapore, Malaysia, the USA, the Philippines, Bangladesh, Kuwait, Bahrain and Oman.

Besides, the Indian Navy has sent two warships to the Maldives from Cochin to evacuate 1,000 people, to return on Friday.

They will carry people stranded in these countries before they closed their airports to passenger flights and entered lockdown in March.

Urgent medical cases, pregnant women, the sick and elderly and those "stranded in difficult situations” and close relatives attending funerals will get priority.

Passengers should bear all their expenses, including the airfare and for quarantine facilities according to their preferences.

They should remain in 14 days in institutional quarantine and, if they remain negative after a swab test, another fortnight at home.

According to officials, the evacuation will be carried out as per the standard operating procedure set by the Indian Council for Medical Research (ICMR).

Each flight will carry 200 to 250 passengers. State nodal officers will take care of their needs back home. Passengers should download an app called Arogya Setu and update all their details, including their travel and quarantine plans on it.

It will pass on your information to the district administrations of your transit and end destination in India.

"The Indian mission in the UAE alone has received 197,000 registrations so far, and it’ll take time to bring all of them back home.” A Navy statement says it has launched Operation "Samudra Setu” or "Sea Bridge” to repatriate Indian citizens from overseas.

"We have been directed to make suitable preparations for their evacuation by sea. A total of 1000 persons are planned to be evacuated during the first trip,” it said.

"The evacuated people will be disembarked at Kochi, Kerala, and entrusted to the care of state authorities.” As per the federal health protocol, only those who have tested negative for Covid-19 are allowed to fly. They need to undergo medical screening, including IGM/IGG testing for Covid-19 antibodies at the airport before boarding. They should sign an undertaking to be in institutional quarantine back home and bear the cost.

On boarding, they will get a safety kit containing two three-layered face masks, two pairs of gloves and pouches/small bottles of hand sanitizers.

The flight staff and crew will be in personal protective equipment (PPE), and passengers will wear masks and maintain environmental, respiratory and hand hygiene.

Passengers found to be symptomatic during the flight will be shifted to the isolation zone onboard. All of them will undergo thermal screening on arrival as well. Asymptomatic passengers would be kept under institutional quarantine for 14 days. Those tested negative after this period can go home and continue in quarantine.

Others will be shifted to hospitals.

The travel would be arranged by aircraft and naval ships. The Standard Operating Protocol (SOP) has been prepared in this regard.