Our armed forces will be cornerstone of UAE’s strategic plans for next 50 years: AD CP - GulfToday 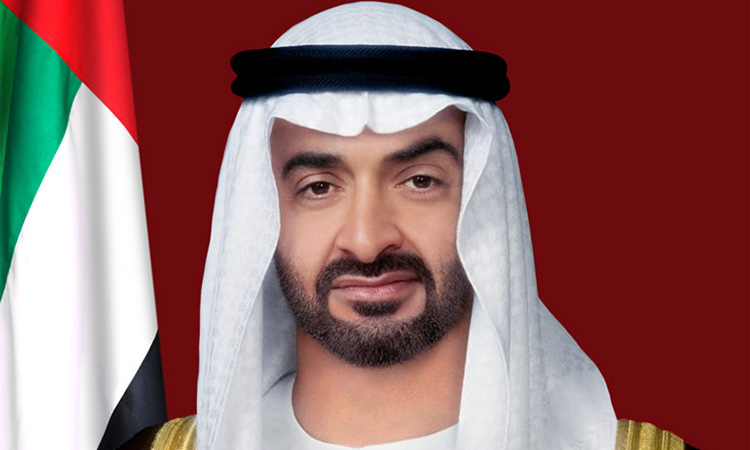 His Highness Sheikh Mohamed Bin Zayed Al Nahyan, Crown Prince of Abu Dhabi and Deputy Supreme Commander of the UAE Armed Forces, has praised the role of the country’s armed forces in fighting all sorts of crises across the globe.

"The 44th anniversary of the unity of our armed forces this year is happening during exceptional circumstances facing the entire world, due to the outbreak of the novel coronavirus that we are witnessing and its negative implications, which are not limited to health aspects, but also affects humanitarian, economic and security aspects among others," Sheikh Mohamed said.

"Many countries around the world have deployed their armed forces in their fight against coronavirus, relying on their equipment and qualified human resources capable of addressing any risks at any place and time," he added in his statement to ‘Nation Shield’ magazine on the occasion of 44th UAE Armed Forces Unification Day.

Sheikh Mohamed also called upon the UAE Armed Forces to study the changes brought about by the pandemic to the concept of national security in different countries, affirming that the armed forces will be a "cornerstone" of the UAE’s "strategic plans to prepare for the next 50 years."

My sons and daughters, officers, non-commissioned officers and soldiers, members of the valiant armed forces: The UAE Armed Forces’ Unification Day on 6th May, 1976, will always remain a milestone in the history of the nation and the entire region, as it strengthened the leading and inspiring experience of the UAE.

On the 44th anniversary of the UAE Armed Forces’ Unification Day, we remember its rich history of honourable services at all times. We salute our valiant soldiers in all fields, who are performing their national duty and protecting the UAE’s interests.

We remember our heroes, the martyrs, who sacrificed their lives to defend the security, sovereignty and dignity of this nation, and we salute them and their mothers and fathers for their love and sacrifice for this country.

We also remember, with much gratitude, the late Sheikh Zayed Bin Sultan Al Nahyan and the founding leaders of this great nation, when they made the historic decision to unite our armed forces. This courageous decision reinforced the UAE, by creating one military entity operating under one flag.

On this occasion, I appreciate the key role of Emirati women in the armed forces, and their devotion and efficiency in performing their duties, highlighting their worthiness and influential presence in all areas of work, and their participation with men in the process of overall development.

Officers, non-commissioned officers and soldiers, members of our valiant armed forces: The 44th anniversary of the unity of our armed forces this year is happening during the exceptional circumstances facing the entire world, due to the outbreak of the novel coronavirus that we are witnessing and its negative implications, which are not limited to health aspects, but also affects humanitarian, economic and security aspects among others.

The country’s various authorities are cooperating to fight and contain the virus, as one national efficient system.

The officials who are running this system deserve appreciation, respect and gratitude, as they have proved the ability of the UAE to face crises, no matter how challenging they are.

They are harnessing the nation’s capabilities with the teamwork of national institutions, enhancing the people’s awareness and inspiring the values of solidarity, commitment and responsibility that characterise the UAE’s community.

Relevant authorities concerned with national security, most notably, the UAE Armed Forces, should consider these changes.

I am confident that our armed forces, in light of its deep understanding of the nature of regional and international changes and developments, along with advanced research academies and institutes, are capable of studying these changes and their dimensions, seeing the future, and drafting appropriate plans. This will reinforce the UAE’s national security system and ensure its readiness to handle any threats, regardless of their source or nature.

Many countries around the world have deployed their armed forces in their fight against coronavirus, relying on their equipment and qualified human resources capable of addressing any risks at any place and time, which highlights the fact that the armed forces are always the protectors of countries in times of crises.

Over the past decades, our armed forces have always been the protector of the UAE’s sovereignty, security and development achievements, despite the conflicts, wars and crises witnessed by the region, and they will always be the country’s shield and a symbol of its strength and ability to address challenges.

Our armed forces are an integral part of these efforts and a cornerstone of our strategic plans to prepare for the next 50 years.

The UAE Armed Forces is a symbol of unity and community coherence and will always remain the protectors of our future journey. It is a key component of the country’s comprehensive development, through its qualified human resources and its role in reinforcing the country’s strategy to diversify trade and establish a knowledge-economy. The work of our advanced defence manufactures, which have witnessed significant recent developments, will further bring more advancements in this regard.

My sons and daughters, members of the valiant armed forces: We are today celebrating this precious day with all Emirati people, to honour the historical role performed by the UAE Armed Forces and our valiant officers and soldiers in Yemen in previous years as part of the Arab Coalition to restore legitimacy, not only on a military level but also on the development and humanitarian levels.

The strengths of armies are initially made by heroes' sacrifices and the courage of their loyal members and their readiness to sacrifice themselves to defend their countries.

The glorious epics of our armed forces in Yemen have made us proud and it will always be proof of the Emirati people’s courage, values and ethics and inclinations to support righteousness. The UAE never hesitates to support others in times of crises, regardless of the required sacrifices.

What the UAE Armed Forces has done in Yemen since 2015 is an extension of its positive role since the unification in 1976 in preserving peace, stability and security, both regionally and internationally, as well as addressing the threats facing people and hindering the processes of development and stability. This role has received praise and appreciation from the entire world.

The UAE will always support the Yemeni people in achieving their legitimate aspirations to accomplish development and stability and build their country.

To the Armed Forces and citizens of the UAE: We live in a world full of risks and threats on all fronts, which require our armed forces to be ready, efficient and professional.

The leadership is keen to provide it with all resources, components and possibilities to enable it to perform its role, whether by providing it with advanced weapons, offering training, or enabling it to interact with other military forces.

Due to the development and modernisation plans drafted in previous decades, the capacities of our armed forces have been strengthened, making it a symbol of the UAE’s strength and a source of pride, not only for the Emirati people but also for all Arabs.

The development of the UAE Armed Forces and the efforts to reinforce its capabilities and supply it with the latest international military technologies will always be a top priority of the country.

My sons and daughters, members of the valiant armed forces: Our armed forces have been influential in the fight against terrorism in the region in past years, and have participated in all regional and international efforts, initiatives and alliances to fight terrorism and counter its risks to international peace and security.

Despite the setbacks suffered by terrorist groups that led to the collapse of their plans, especially Daesh and Al Qaeda, the risks posed by terrorism to the region have not ended, and they still threaten stability and development.

Terrorist forces are still attempting to revive their plans, exploit the turbulence in some countries in the region, and use this opportunity to grow and rebuild themselves, which require reinforcing regional and international cooperation to address this threat, not only in the region but also in the entire world.

My sons and daughters, officers, non-commissioned officers and soldiers, members of the valiant armed forces: On this glorious national occasion, we send our greetings to President His Highness Sheikh Khalifa Bin Zayed Al Nahyan, and His Highness Sheikh Mohammed Bin Rashid Al Maktoum, Vice President, Prime Minister and Ruler of Dubai, and Their Highnesses Supreme Council Members and Rulers of the Emirates, and to you, my sons and daughters, recruits of our valiant armed forces, and to the people of the UAE who are proud of their armed forces.

May our precious nation, the UAE, be stronger every year, and may our armed forces be an example of strength, heroism and sacrifice. 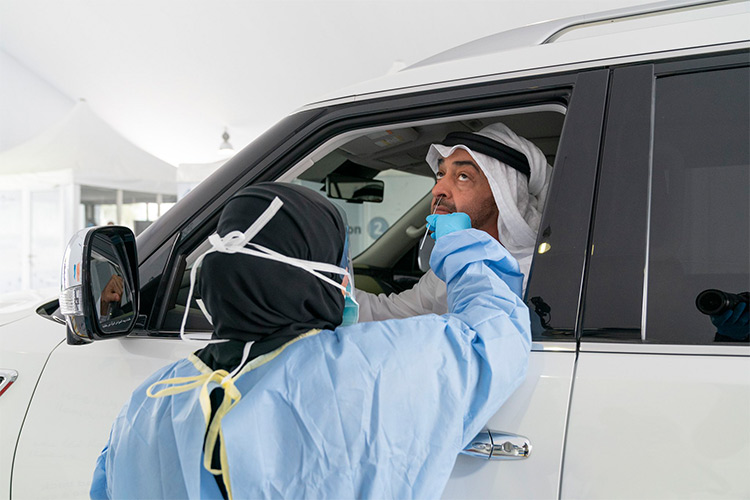 Medical teams out in the field are the first line of protection of the UAE, their sacrifices safeguard our health, tweets Sheikh Mohamed. 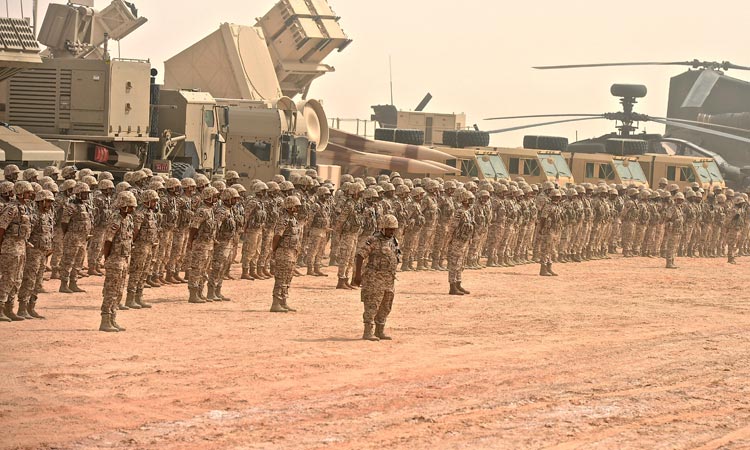 Sheikh Khalifa Bin Zayed said he, along with the other Rulers, values the efforts and active participation of our brave Armed Forces, police and Civil Defence forces, and security services’ efforts to ensure the implementation of precautionary and preventive measures enacted by the country to contain the spread of the coronavirus pandemic. 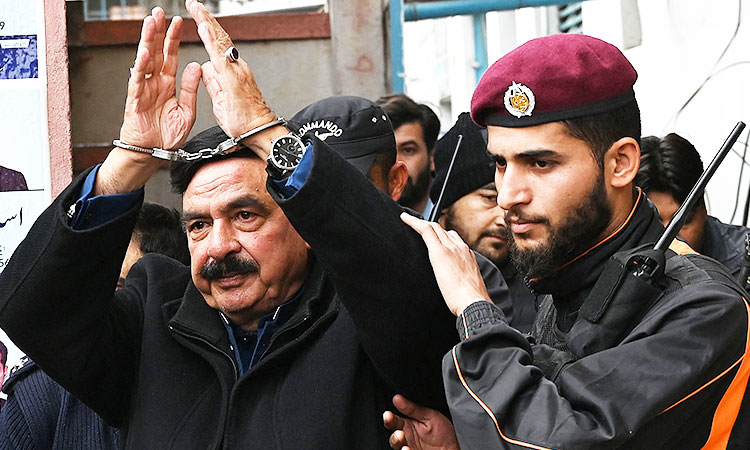