The largest Arctic ozone hole closes, not due to the coronavirus lockdown - GulfToday

The largest Arctic ozone hole closes, not due to the coronavirus lockdown 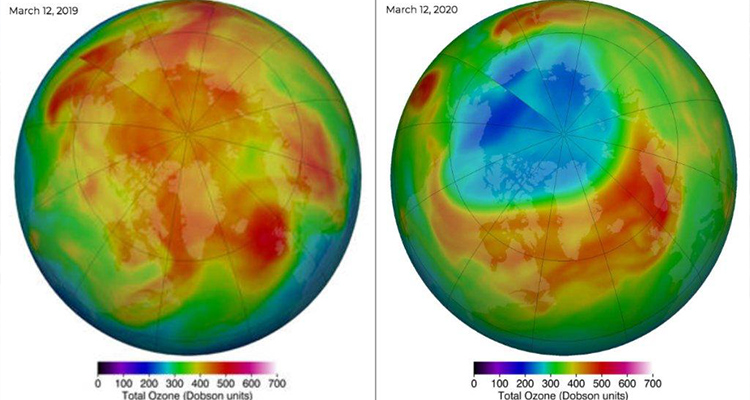 This combination photo shows the Arctic ozone hole before and after recovery. Twitter.

A record-breaking hole in the ozone layer, which developed to become the largest ever seen over the Arctic, has closed just weeks after opening, scientists observing the phenomenon have said.

The gap in the vital layer, which protects the Earth from harmful radiation from the sun, set a new record for ozone depletion in the northern hemisphere when it formed earlier this month.

The “unprecedented” hole was roughly the size of Greenland, and stretched over the top of the polar icecap.

On April 23, the Copernicus Atmosphere Monitoring Service (CAMS) announced the ozone in the affected area had recovered.

Though previous smaller holes have appeared in the ozone layer over the northern hemisphere before, scientists said it was the “first time you can speak about a real ozone hole in the Arctic.”

CAMS said the hole had been caused by unusual weather patterns over the Arctic.

“Although it looks like the polar vortex has not quite come to an end yet and will reform in the next few days, ozone values will not go back to the very low levels seen earlier in April,” the organisation tweeted.

Asked by one respondent whether it was due to less pollution because of the lockdowns to prevent the spread of COVID-19, the organisation replied:

“This Arctic ozone hole actually has nothing to do with coronavirus-related lockdowns, but rather was caused by an unusually strong and long-lived polar vortex.”

In an earlier article about the causes of the ozone depletion over the Arctic, the scientists said:

“While we are used to ozone holes developing over the Antarctic every year during the Austral spring, the conditions needed for such strong ozone depletion are not normally found in the northern hemisphere.”

The CAMS scientists added: “This ozone hole was basically a symptom of the larger problem of ozone depletion, and closed because of local annual cycles, not long-term healing.

But, there’s hope: the ozone layer is also healing, but slowly.”