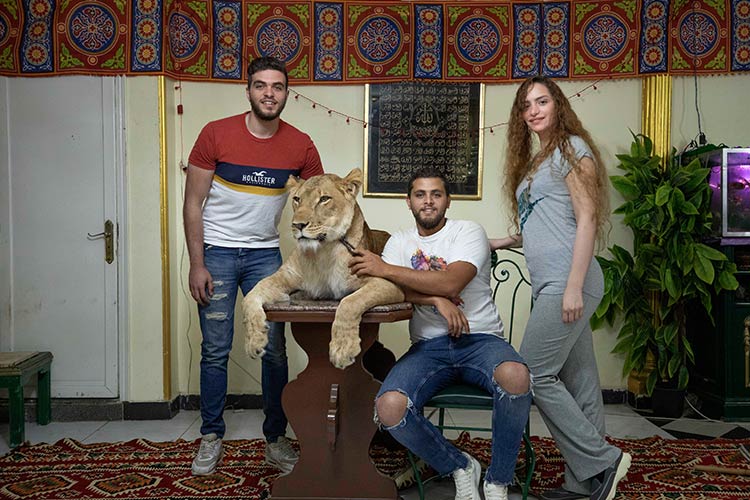 At his Cairo apartment, located just off a busy road along the Nile River, Ashraf El Helw, a third-generation Egyptian lion trainer, prepares for a show with his big cats.

Instead of a circus ring, his living room is his stage. He has already posted one online video of the lions performing tricks inside his home since Egypt imposed restrictions to limit the spread of the novel coronavirus, including a nightly curfew. 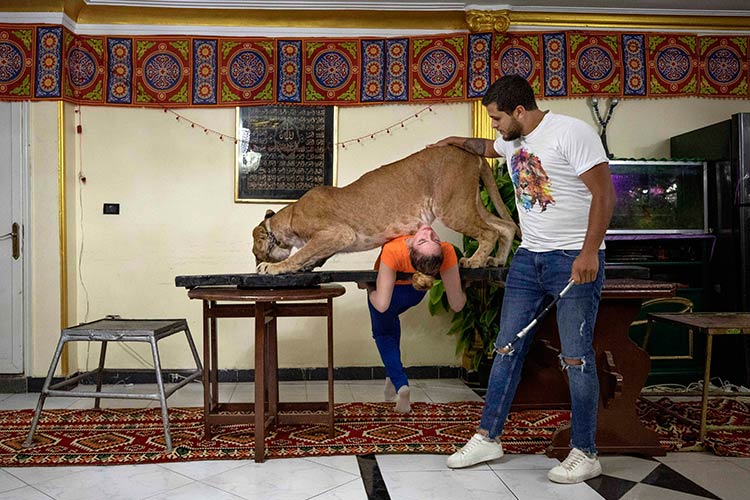 El Helw siblings perform during a show at their home. AP

He is now getting ready to film the second one and says more are in the works, claiming he wants to encourage people to stay at home amid the pandemic. The first video received rave responses from Egyptians on social media - but also raised questions over how the country’s most famous lion-training family treats its animals.

The family’s big cats are kept on their farm an hour outside of Cairo, and El Helw says he brings them into the city for the shoots. After filming is over, they go back to the farm, with the some 40 other animals who live there, including monkeys and other large cats.

During a recent visit by The Associated Press to his apartment, el-Helw showed off Joumana, one of the family's female lions. He prompted her to put her paws on his shoulders and the two moved as in a dance. In another trick, the lioness obeyed a command, a light prod with a stick, to walk across a plank, stepping over El Helw's sister Bushra, also a lion trainer. 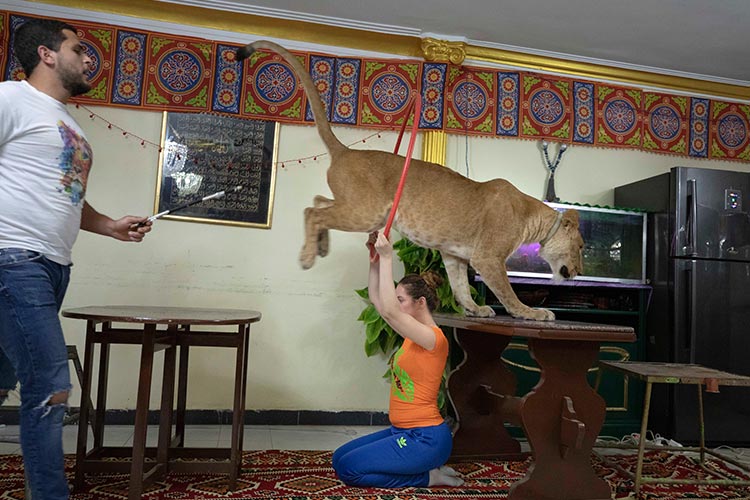 With Egypt's national circus closed due to the pandemic El Helw has his big cats performing tricks at his Cairo apartment. AP

The show's climax comes when El Helw places a piece of meat hanging from a stick into his mouth, and Joumana jumps to grab it.

"Since I opened my eyes to the world, I found lions around me,” said the 26-year-old Ashraf.

He said he started working with the animals - alongside his older siblings - when he was 6 years old. By age 16, he was doing performances.

The el-Helws have been doing circus shows with the big cats for over a century. Ashraf's grandmother was a renowned circus performer, Mahassen el-Helw, the Arab world’s first female lion trainer. She was known as "the iron woman” for her stern stage demeanour.

There has also been tragedy. 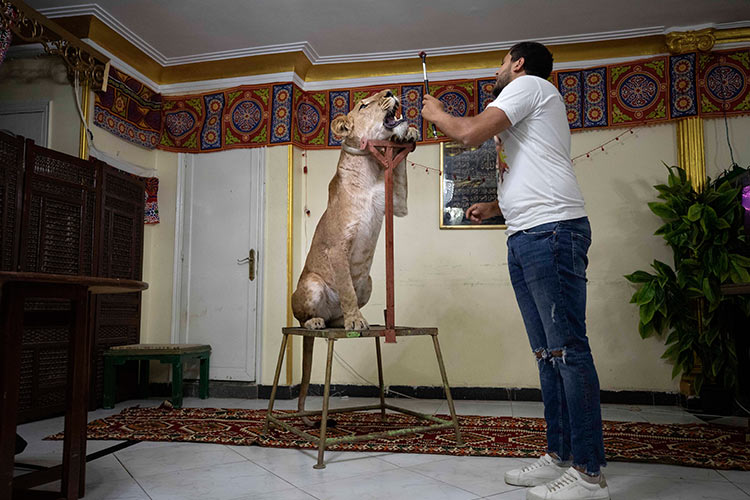 Ashraf's grandfather, Mohammed El Helw, was killed in 1972 during one of his shows by Sultan, a lion who tore him to pieces before the eyes of a horrified, helpless public. There have also been reported incidents of several other family members being attacked during shows in recent years.

Ashraf's older sisters - Luba, 38; Ousa, 35, and Bushra, 28 - are also professional lion trainers at Egypt’s National Circus. Founded in 1966, the circus is housed in a tent beside the Nile, drawing mostly school groups and working-class families for its evening shows.

Some have criticized the el-Helws for their treatment of the animals.

Dina Zulfikar, an animal rights activist who sits on the board of the country’s largest zoo, said that bringing wild animals into private homes is against the law. Also, Ashraf el-Helw’s social media videos give a skewed picture of the danger big cats pose, she said.

"This is an irresponsible and foolish behaviour,” she said.

"They are not pets, they are wild animals.” But for the el-Helw family, the lions are both a livelihood and a family constant.

"They are like my children,” said Bushra, giving Joumana a loving pat on the back.