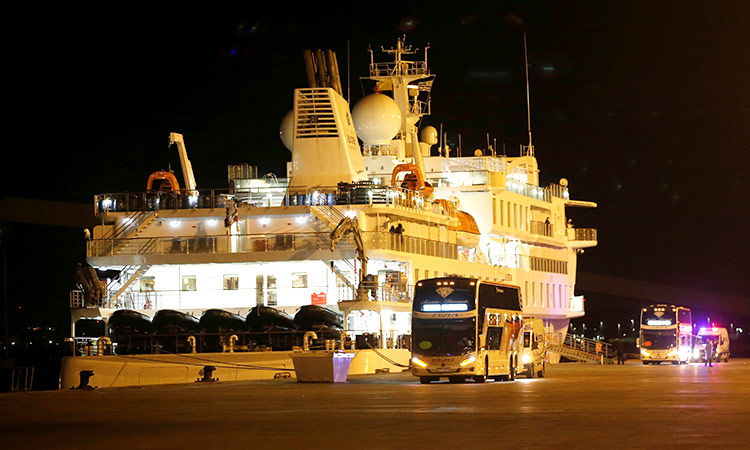 Buses with Australian and New Zealander passengers from Australian cruise ship at the port in Montevideo, Uruguay. Reuters

An Australian cruise ship stranded off the coast of Uruguay for two weeks with more than 100 people aboard infected with the new coronavirus arrived at the port of Montevideo on Friday.

Following an agreement between the governments of Uruguay and Australia, about 110 passengers began disembarking from the Greg Mortimer before they were due to be taken along a "sanitary corridor" to Montevideo's international airport, where they will take a medically equipped charter flight to Melbourne.

The Australian and New Zealander tourists — including people who tested negative and others confirmed ill with the virus — will be taken on buses with a police escort straight to the runway without entering the terminal. 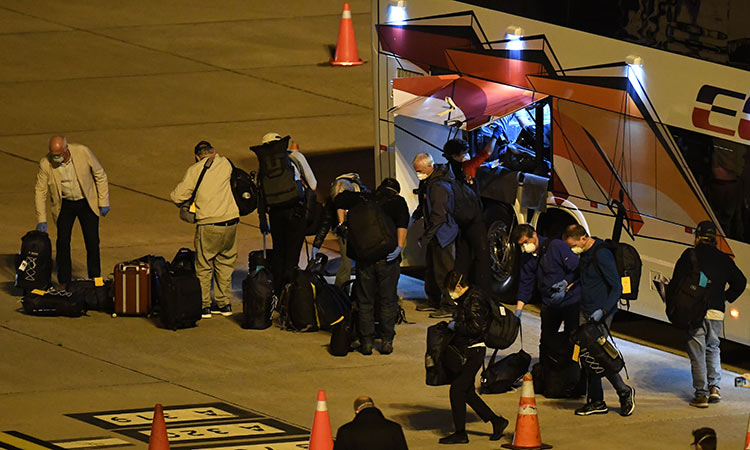 Passengers evacuated from the Australian liner descend from a bus before boarding in Ciudad de la Costa. AFP

They are due to take off in the early hours of Saturday.

"If everything goes well, Uruguay will be completing a complex but necessary humanitarian mission," said the country's Foreign Minister Ernesto Talvi.

"We don't consider it an option, but rather an ethical obligation."

Of the 217 people -- passengers and crew -- aboard the ship, 128 have tested positive for the virus.

Aboard the plane, passengers will be "seated by test results and level of care required by passenger," said Australian company Aurore Expeditions, owner of the Greg Mortimer.

The tourists were on an expedition to Antarctica, South Georgia and Elephant Island when their adventure was called off due to the nearest South American countries — Argentina and Chile — closing their borders and imposing lockdowns.

The ship traveled to Montevideo as it was the nearest port still open.

It had been anchored in the Rio de la Plata since March 27. 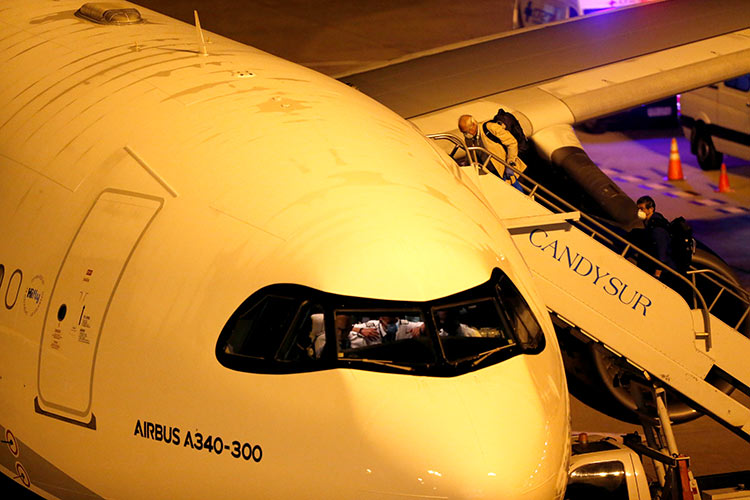 Australian and New Zealander passengers from Australian cruise ship board an aircraft in Montevideo, Uruguay. Reuters

Since then, eight people have been taken from the ship to hospitals in Montevideo with "life-threatening" conditions.

All are in a stable condition and earlier on Friday, Uruguay's foreign ministry told AFP that three Australians undergoing hospital treatment would be allowed to board the flight to Melbourne as they are in sufficiently good health to travel.

Two of those are a couple who were brought ashore and taken to a hospital on Wednesday suffering from pneumonia, while the third person had been receiving clinical attention since last week.

Of the other people receiving hospital treatment, two Australians are in intensive care, while a Filipino crew member is due to be released back to quarantine on the boat.

The other two are a British tourist and a second Filipino crew member.

Uruguay's government considers all people aboard the Greg Mortimer to be infected, even if they haven't tested positive for the virus. 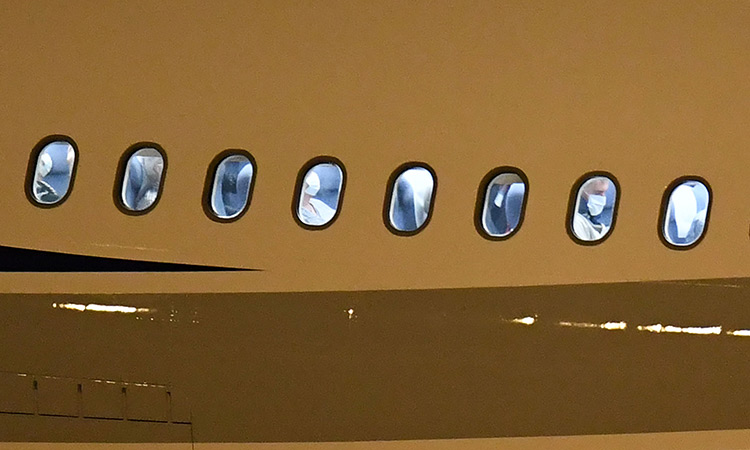 "There will be practically no human contact" between the passengers and others during the transfer operation, Talvi said this week.

Aurore said it was covering the transfer costs for all passengers and that the New Zealand government was organizing further travel on from Melbourne for its citizens.

After the evacuation, more than 80 crew members and around 20 Europeans and Americans will remain on board the Greg Mortimer.

Those who have tested positive for the virus "will have to wait until they test negative" before heading home via Sao Paulo, Aurore said on Tuesday.

Those who have already tested negative will be allowed to leave in the coming days, provided they pass another test first.