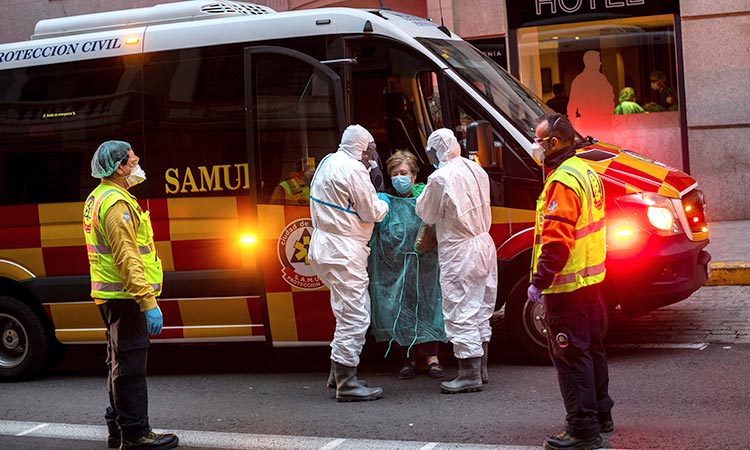 A patient (center) is transferred to a medicalised hotel during the COVID-19 outbreak in Madrid, Spain. AP

The new coronavirus has killed more than 70,000 people across the globe, the majority in Europe, according to an AFP tally Monday at 1100 GMT.

Out of a total of 70,009 killed in the pandemic, 50,215 are in Europe, according to figures compiled from official government data and the World Health Organization.

Spain declared on Monday a fourth consecutive drop in the number of coronavirus-related deaths with 637 over the past 24 hours, the lowest number in nearly two weeks.

Fatalities, which were sharply down on the record 950 on Thursday, brought the total deaths in the country to 13,055, second only to Italy.

The official figures represent an increase of 5.1 per cent over the last 24 hours, compared to a 4.8 per cent rise on Sunday and a 32.63 per cent leap as recently as March 21.

"These figures confirm again this downwards tendency which we have been observing," said Maria Jose Sierra of the health ministry's emergencies coordination unit.

Over 40,000 coronavirus patients have been discharged from hospital, or nearly 30 percent of all confirmed cases of the disease, she added.

With deaths and new infections falling the Spanish government is studying how to gradually ease the lockdown imposed on the country of 47 million people on March 14. It has been extended until April 25.

US President Donald Trump said he was considering a plan to halt domestic flights to coronavirus hot spots inside the United States.

The Pentagon is looking to provide up to 100,000 body bags for use by civilian authorities.

US House Speaker Nancy Pelosi said she wants to virus-proof the November election by including funding to boost voting by mail in the next pandemic response plan, as confirmed cases in the country climbed to 186,101 and while deaths rose to 3,603.

The governor of New York cracked down even harder on public gatherings, calling residents who disregarded stay-at-home rules "selfish" as California's governor warned his state will run out of hospital beds by next month.

A press freedom group has denounced the "unacceptable" injury of an award-winning Syrian photojournalist during a Paris protest against police brutality.