Sanitizers should have 60% isopropyl alcohol - GulfToday 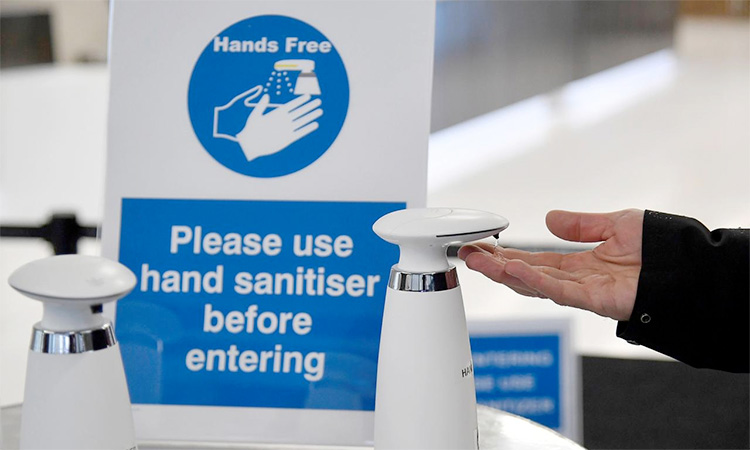 Photo has been used for illustrative purposes. File / Reuters

Amina Hospital's (Ajman) Pulmonary specialist Dr Kinan Abdulrahman Alkeshk, interviewed on the co-relation between the most common respiratory problems and Coronavirus 2019 (COVID19), said, “The World Health Organisation and the Ministry of Health and Prevention have time and again reminded us about the significance of hand washing. Or please use hand sanitizers whose alcohol content must be 60 percent.”

In a press release regarding children and Covid 19, Cook Children’s Hospital (Texas, USA) pediatrician Dr. Justin Smith said, “Wash your hands often with soap and water for at least 20 seconds especially after going to the bathroom; before eating; after blowing your nose, coughing or sneezing. If soap and water are not available, use an alcohol-based hand sanitizer with at least 60 per cent alcohol.”

Smith said parents of children with chronic respiratory syndromes such as asthma should “gather medical supplies and prescriptions that you might need in advance.”

The press release was timely as heard from FM radio newscasts in the past two days were the deaths of two 13-year-olds in Belgium and the UK due to COVID19.

Pursued, Alkseshk said: “Hand sanitizers need to have at least 60 per cent alcohol in order to kill most viruses.

Based on her observational data, the most frequently recorded respiratory ailments in the last two years and which are also the same cases in low and middle-income economies are allergies in nature namely asthma and hay fever which is nose inflammation due to the over-reaction of the immune system to allergens.

Alkeshk added: “Lower respiratory infections are the most important reasons for patient admissions at the Pulmonary In-Patient Department.”

Causes are the “increase in urban air pollution, climate change and the over-use of anti-biotics.”

It is premature to conclude whether these conditions are co-related with COVID19 even as research studies are already ongoing to ascertain the real nature of this acute upper respiratory pandemic.

“But, it is well-known that patients with asthma and other allergic conditions have significant increased risks of respiratory infections with both viruses and bacteria. Studies have shown that the body has a weaker immune system in these situations as it fights the allergies,” she said.

Alkeshk added, “At the same time, respiratory infections have more morbidity in allergic patients than in normal patients.”

In addition to the new cases, 2,348 individuals have recovered and six people passed away.