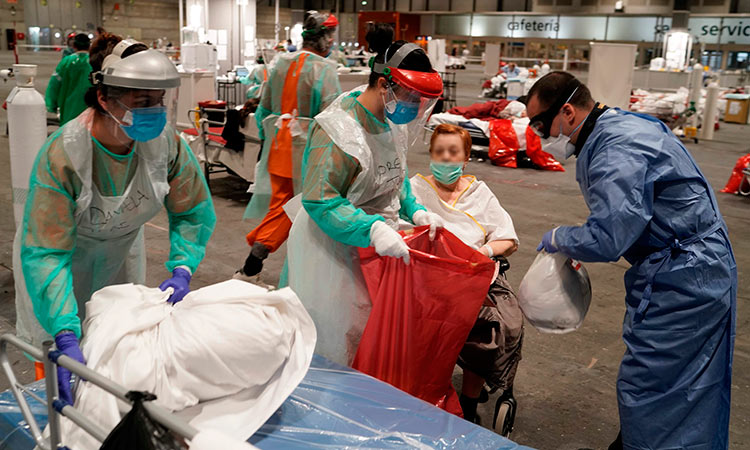 This photo shows healthcare workers attend a patient at the temporary hospital for COVID-19 in Madrid. AFP

Spain's coronavirus Deaths jumped by a record number on Tuesday as the country's medical system strained to care for its tens of thousands of infected patients, and the World Health Organization warned that the pandemic was far from over in Asia.

Hard-hit Italy and Spain now account for more than half of the 38,000 COVID-19 deaths reported worldwide and the United States has the most confirmed cases at 164,610, according to a tally by Johns Hopkins University.

Worldwide, more than 788,000 people have been infected and 166,000 have recovered, according to Johns Hopkins University.

Spain and Italy are still struggling to avoid the collapse of their health systems, with Spain saying hospitals in at least half of its 17 regions are at or very near their ICU bed limits and more than 10,000 medical workers are among the country's reported 94,417 infections.

To cope, dozens of hotels across Spain have been converted into recovery rooms for patients not in serious condition, and authorities are building makeshift field hospitals in sports centers, libraries and exhibition halls. So far they have managed to add 23,000 beds. 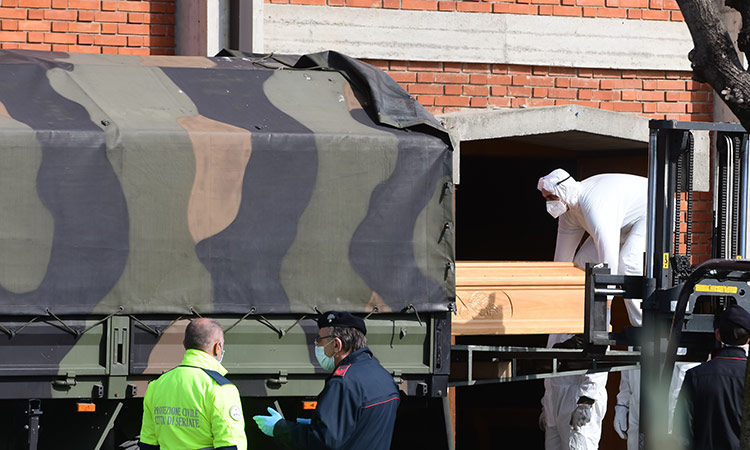 Overnight, Spain recorded 849 new deaths, the highest daily toll since the pandemic hit the southern European country. It has now claimed the lives of 8,189 people in Spain, forcing Madrid to open a second temporary morgue this week after an ice rink pressed into service last week become overwhelmed.

Authorities are shifting ventilating machines to regions with the highest number of ICU patients and moving the patients themselves between regions "has not been ruled out," said Dr. María José Sierra of Spain's health emergencies center.

Deaths climbed rapidly in the United States, which was poised Tuesday to overtake China's reported virus death toll of 3,300. But experts say all numbers reported by governments and states in this pandemic are faulty in different ways, due to the lack of testing, mild virus cases that are missed or the determination of some governments to try to seize and shape their pandemic narrative. 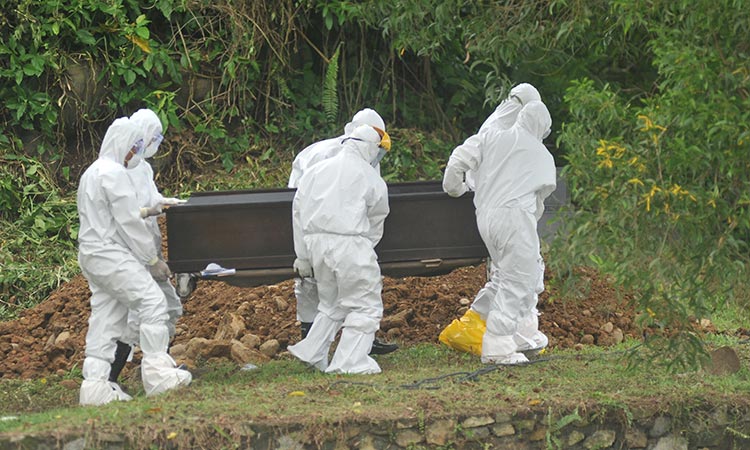 Italy's death toll rose to nearly 11,600 — the highest in the world by far — but its rates of new infections were slowing.

To the east, Russia registered 500 new confirmed cases in the biggest spike since the beginning of the outbreak, bringing its total to 2,337. Moscow, the capital, has been on lockdown since Monday and the government is edging toward to declaring a national state of emergency.

In New York, the epicenter of the American outbreak, Cuomo and health officials warned that the crisis unfolding there is just a preview of what other US cities and towns will soon face. New York state's death toll climbed by more than 250 people in a day to over 1,200.

Even before the governor's appeal, close to 80,000 former nurses, doctors and other professionals were stepping up to volunteer in New York, and a Navy hospital ship arrived with 1,000 beds to relieve pressure on the city's overwhelmed hospitals.

In California, officials put out a similar call for medical volunteers as coronavirus hospitalizations doubled over the last four days and the number of patients in intensive care tripled.

Experts, however, maintain the pandemic will be defeated only by the social distancing measures that have put billions of people on lockdown and upended the world's economy.