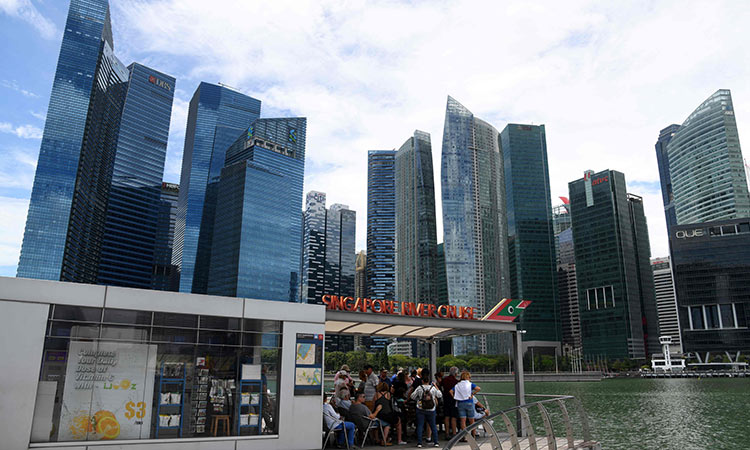 This photo shows visitors waiting for a boat tour along the Singapore river in Singapore. AFP

Singapore's central bank aggressively eased monetary policy on Monday as the bellwether economy braced for deflation and a deep recession this year due to the coronavirus pandemic.

The Monetary Authority of Singapore (MAS) manages policy through exchange rate settings, rather than interest rates, letting the local dollar rise or fall against currencies of its main trading partners within an undisclosed band. 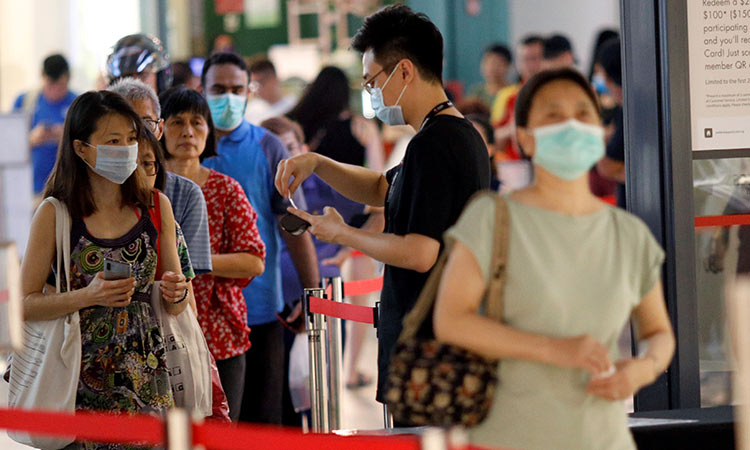 People queue to enter a mall, as mall capacity is regulated in a series of social distancing measures in Singapore. Reuters

The widely-expected easing on Monday was the most aggressive since the 2009 financial crisis, flattening the band's rate of increase and effectively shifting its centre lower. It also comes only days after the government unveiled a large fiscal package to soften the outbreak's hit to the economy.

While the MAS move follows drastic steps by other central banks, it was still not as bold as some in the market had expected, which pushed the local currency up slightly.

"We have heard the government talk about the downturn in pretty dire terms, so there was no mistaking that pretty aggressive easing would be required," Barclays' economist Brian Tan said, adding he had been expecting a bigger move.

The MAS adjusts its policy via three levers: the slope, mid-point and width of its Singapore policy band, known as the Nominal Effective Exchange Rate, or S$NEER.

Analysts said this amounted to a downwards adjustment of the first two settings, the slope and mid-point, but left the width unchanged.

All nine economists in a Reuters survey this month expected the central bank to ease as policymakers worldwide step up efforts to limit the economic damage from the fast spreading virus.

Sectors that are intertwined with the global supply chain such as biopharmaceutical and petrochemicals as well precision manufacturing will be among priority sectors, Chan Chun Sing told reporters.