Pregnant US citizen returns to Abu Dhabi with UAE help 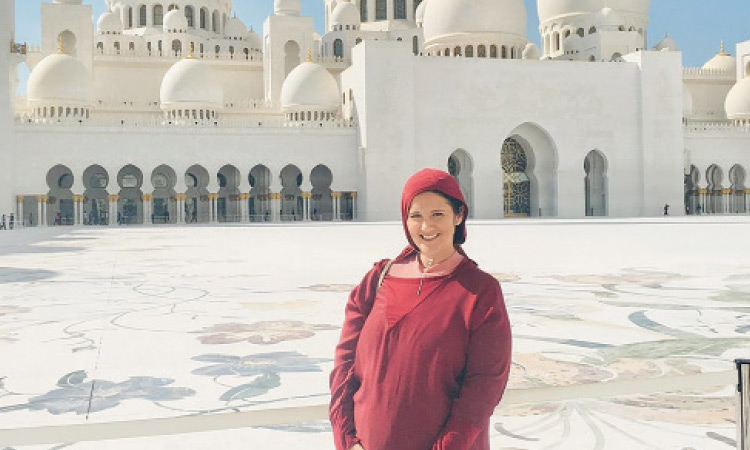 Six-months pregnant Hannah O’Reilly, a US citizen, has returned to what she describes as her home, Abu Dhabi.

A resident of the country, O’Reilly returned to the UAE as part of a 200+ group of evacuees from the United States. She was among Emirati students and nationals undergoing medical treatment in the US that were evacuated by UAE authorities and returned to their homeland.

In 2017, the Institute of International Education reported some 3,094 Emirati students pursuing their studies in the US.

O’Reilly told the Emirates News Agency, WAM, that she was visiting family in the US in March. “On 11th March, everything was very normal,” she recalls. “That night,” O’Reilly added, “Donald Trump announced for the first time that COVID-19 was now a real risk to the nation.”

“I was staying with my parents in New Jersey, and by 16th March, things really started to change. Everyone was realising that the virus was not contained, and definitely not in nearby NYC,” O’Reilly noted.

According to NYC Health data, there are over 33,474 positive COVID-19 across the six boroughs of New York.

O’Reilly found herself stranded as a result of travel restrictions being imposed globally. She explained that the health insurance she took out for her travel had expired. “It was becoming more and more apparent that I was in danger, all without my husband.”

“I was stranded in America where everyone around me was starting to get really ill, and I was desperately terrified,” the UAE resident recalls.

With COVID-19 flooding the US, many individuals who are insured are left to deal with insurance policy red-tape. Doctors, nurses, and medical practitioners on the frontlines of this pandemic are reportedly overburdened with the influx of individuals seeking medical care. Those that are not insured — some 27.5 million — are left in even more dire positions.

Upon her return to the UAE, O’Reilly told WAM, “I wanted to come back home to my husband, my doctors, and to my appointments. I have health insurance here [in the UAE]. “But,” O’Reilly continued, “the [UAE] Government came to my rescue, and they brought me out here with many Emiratis who are on their way back home.”

The US citizen had filled out an application via the ‘Tawajudi for Residents’ service provided by the UAE Ministry of Foreign Affairs and International Cooperation. The Ministry launched the service for UAE residents in March, as a bid to communicate with valid residency holders and to help facilitate their safe return to the country during emergencies.

When asked about her journey from the US to the UAE, O’Reilly said that she had received a phone call on 25th March from the UAE Embassy in Washington DC informing her that His Highness Sheikh Mohamed Bin Zayed Al Nahyan, Crown Prince of Abu Dhabi and Deputy Supreme Commander of the UAE Armed Forces, had heard about her case and that her return to the country would be ensured.

“I almost didn’t believe it at first, but it was true, the UAE leadership was rescuing me,” she recalled. “I was beside myself. I could barely gather the information I was receiving. I instantly was crying.”

The next day, O’Reilly travelled to Washington, DC, where UAE Embassy staff assisted her and provided accommodation until her flight on Saturday, 29th March.

She went on to explain that after her 13-hour flight, it took about 2.5 hours to reach the hotel. She said that she, along with the 200+ evacuees, had undergone necessary safety measures including thermal scans on the tarmac, and nasal swab testing at the airport.

When asked to comment on what other UAE residents that are stranded should do, O’Reilly said, “I’ve seen the dangerous panicked crowds at airports in the US and understand firsthand why the UAE needed to put travel restrictions into place fast to protect us all.”

“But you are welcome here still. This is your home. Keep telling your stories and keep trusting that the UAE can and will pull a plan together for us that balances speed with safety,” she stressed.

Commenting on her interactions with UAE officials and authorities, O’Reilly said, “The UAE leadership has shown the world what it takes to contain a crisis with a steady hand and has personally shown me incredible generosity and compassion.”