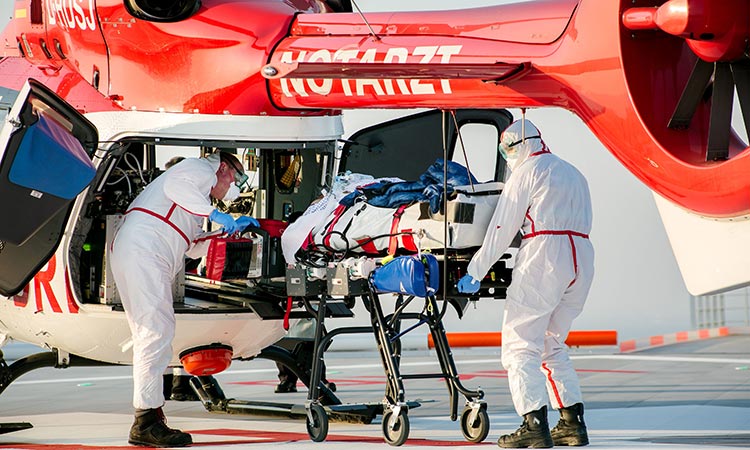 Medical staff transports a patient after landing at the Heliport of the University Hospital Bonn, Germany from France. AFP

More than two-thirds of the deaths from coronavirus have now been recorded in Europe.

Over 667,090 declared cases have been registered in 183 countries and territories since the epidemic first emerged in China in December. Of these cases, at least 134,700 are now considered recovered.

The tallies, using data collected by AFP offices from national authorities and information from the World Health Organization (WHO), likely reflect only a fraction of the actual number of infections.

Italy, which recorded its first coronavirus death in February, has to date declared 10,023 fatalities, with 92,472 infections and 12,384 people recovered.

The virus is straining health systems in Italy, Spain and France. Lockdowns of varying degrees have been introduced across Europe, nearly emptying streets in normally bustling cities.

Germany has fewer deaths than some neighboring countries but still closed nonessential shops and banned public gatherings of more than two people until April 20. But it still had its share of grim news, with 12 residents of a nursing home in the northern town of Wolfsburg dying since Monday after being infected, news agency dpa reported. 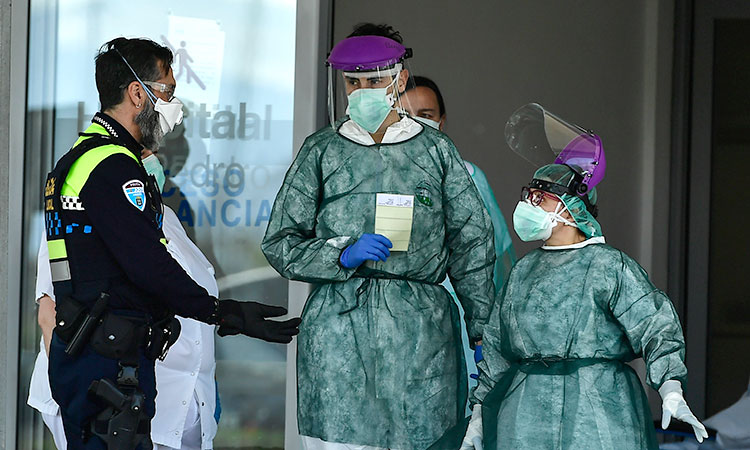 Spain, where stay-at-home restrictions have been in place for nearly two weeks, reported 832 more deaths Saturday, its highest daily count yet, bringing its total to 5,690.

Another 8,000 confirmed infections pushed that count above 72,000. But Spain's director of emergencies, Fernando Simón, saw hope in that the rate of infection is slowing and figures "indicate that the outbreak is stabilizing and may be reaching its peak in some areas.”

Spanish Prime Minister Pedro Sánchez called for a more vigorous response from the European Union. Spain, Italy, France and six other EU members have asked the union to share the burden of European debt, dubbed "coronabonds” in the media, to help fight the virus. But the idea has met resistance from other members, led by Germany and the Netherlands.

"It is the most difficult moment for the EU since its foundation and it has to be ready to rise to the challenge,” Sánchez said. "

As the epicenter has shifted westward, the situation has calmed in China, where some restrictions have been lifted. Some subway service was restored in Wuhan, where the virus first emerged in December, after the city had its virus risk evaluation reduced from high to medium. Five districts of the city of 11 million people had other travel restrictions loosened after their risk factor was reduced to low.

For most people, the coronavirus causes mild or moderate symptoms, such as fever and cough that clear up in two to three weeks. But for others, especially older adults and people with existing health problems, the virus can cause more severe illness, including pneumonia, and lead to death.

More than 135,000 people have recovered, according to Johns Hopkins.