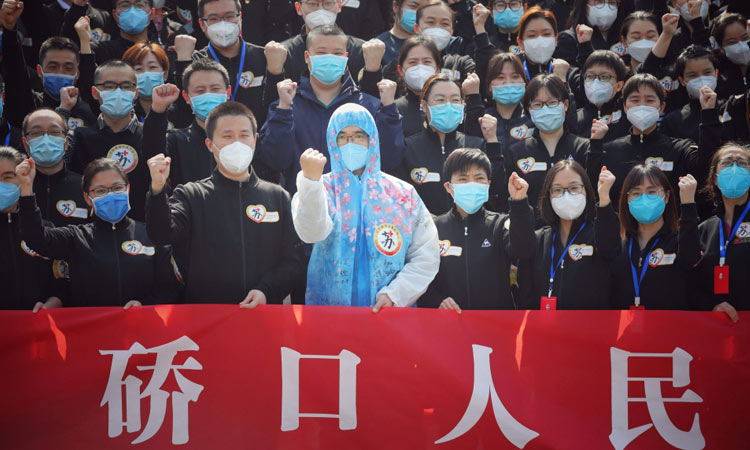 Members of a medical assistance team from Jiangsu province chant slogans at a ceremony marking their departure after helping with the coronavirus recovery effort, in Wuhan on Thursday. AFP

Last month, Wuhan was overwhelmed with thousands of new cases of coronavirus each day. But in a dramatic development that underscores just how much the outbreak has pivoted towards Europe and the United States, Chinese authorities said on Thursday that the city and its surrounding province had no new cases to report. 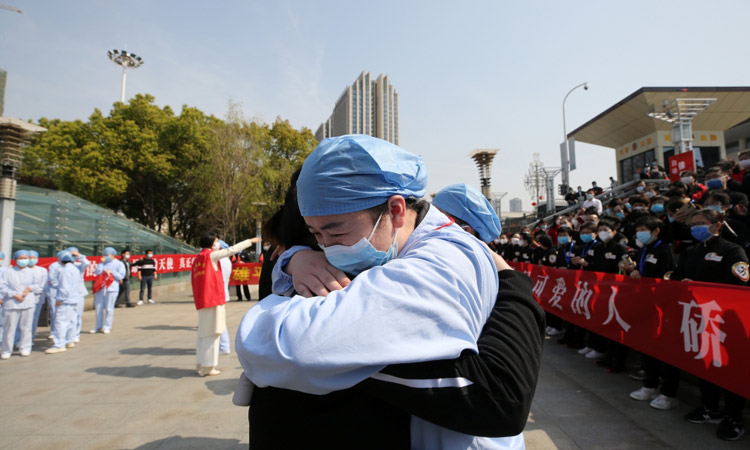 A local worker embraces and bids farewell to a medical worker from Jiangsu at the Wuhan Railway Station. Reuters

The news offered a rare glimmer of hope for the rest of the world as it battles the virus, and perhaps a lesson in the strict measures needed to halt its spread. It came as President Donald Trump likened the fight to "a war” and invoked emergency powers that allow him to compel manufacturers to deal with the pandemic.

Neither cold nor hot weather can kill coronavirus: WHO

Wuhan was where the outbreak first took hold and thousands once lay sick or dying in hurriedly constructed hospitals. But Chinese authorities said on Thursday that all 34 new cases recorded over the previous day had been imported from abroad.

"Today we have seen the dawn after so many days of hard effort,” said Jiao Yahui, a senior inspector at the National Health Commission. 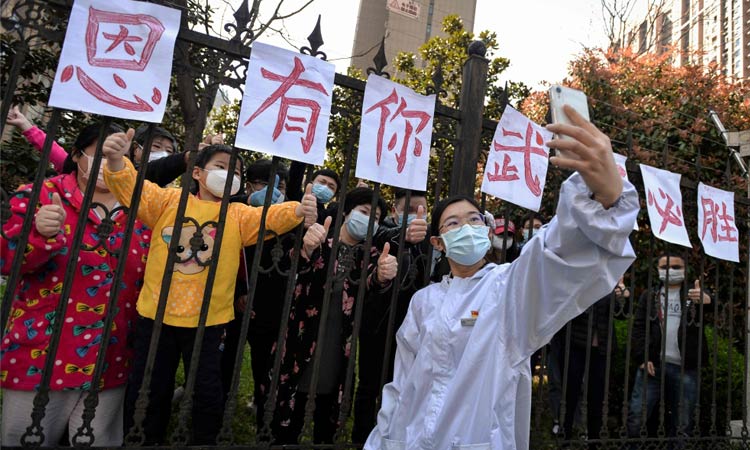 A member of a medical assistance team from Yunnan province taking a selfie with residents in Wuhan. AFP

Still, the virus continued to take its toll elsewhere, both human and economic. Stocks tumbled again on Wall Street on fears of a prolonged recession, falling so fast they triggered another automatic trading halt, while major US auto manufacturers said they were shutting down their North American factories.

Italy was on track to surpass China by Thursday in the number of deaths related to coronavirus, a gruesome milestone that is being blamed on a perfect storm of Italy’s elderly population, its overwhelmed healthcare system and its delay in imposing a complete lockdown in the epicenter, Lombardy. 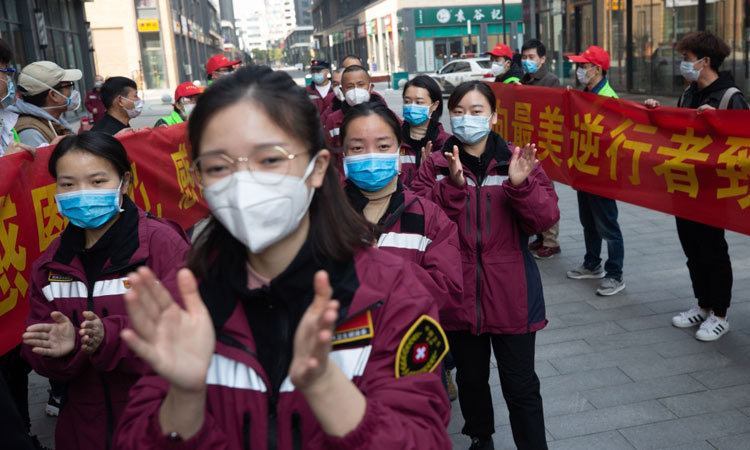 Medical workers from Guizhou province being celebrated in a ceremony as they depart from Wuhan. AFP

Elsewhere around the world, more borders shut, leaving some to wonder how they would get back home. In the Pacific, Australia and New Zealand shut out tourists, allowing only citizens and residents to return, while Fiji reported its first case, a worrying development in a region with poor healthcare.

The US and Canada both closed their borders to all but essential travel and Trump said he plans to assert extraordinary powers to immediately turn back to Mexico anyone who crosses over the southern border illegally.

Russia and Mexico each reported their first death from the virus. Mexico closed its popular spring equinox visits to the Pyramids of the Sun and the Moon at Teotihuacan.

While China did not report any new cases in Wuhan or Hubei province it did record eight additional deaths. 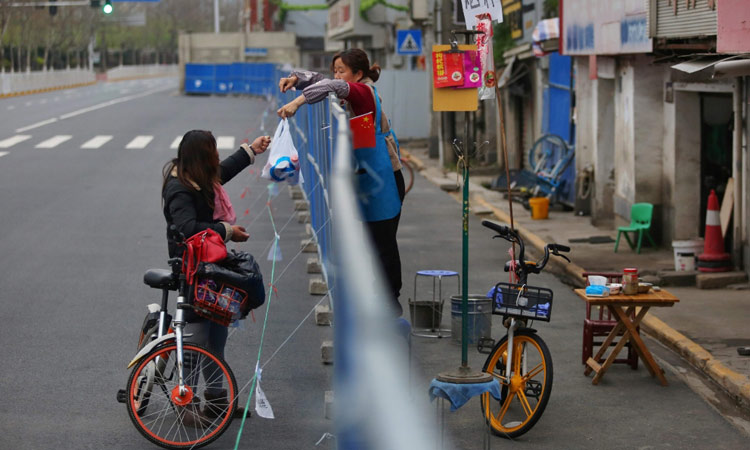 A woman delivers food to a resident over a barrier set up to prevent people from entering or leaving a residential community in Wuhan. AFP

Wuhan has been under a strict lockdown since January. Officials are moving to loosen travel restrictions, but only inside the surrounding province of Hubei where most checkpoints will be taken down. Wuhan remains cut-off, with only those with special permission allowed to travel in or out.

The lockdown will be lifted there only if no additional cases are reported for two consecutive weeks, which may happen next month, Li Lanjuan, a member of the Chinese Academy of Engineering, was quoted as saying.

The improvement in China contrasted with the situation in Italy, where another 475 people died, bringing the death toll close to 3,000. Italy has the world’s second oldest population after Japan and some 87% of those who have died have been over age 70.

Italy is on pace to overtake China’s approximately 3,250 dead when Thursday’s figures are released. Iran has also been hit hard, with more than 1,100 deaths. 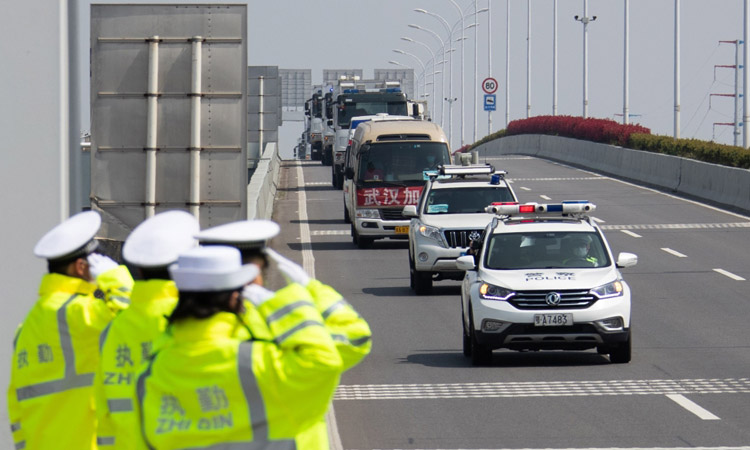 The virus has infected more than 218,000 people worldwide and killed over 8,800. The United Nations warned that the crisis could lead to the loss of nearly 25 million jobs around the world.

More than 84,000 people overall have recovered from the virus, which causes only mild or moderate symptoms such as fever and cough in most cases. Severe illness is more likely in the elderly and those with existing health problems.

Though China still has the largest number of cases, most of its patients have recovered. China even sent medical supplies to hard-hit France, returning a favor done by the French weeks ago.

Around the globe, governments took increasingly drastic measures to fight the epidemic and the threat of a recession, in some cases using emergency powers.