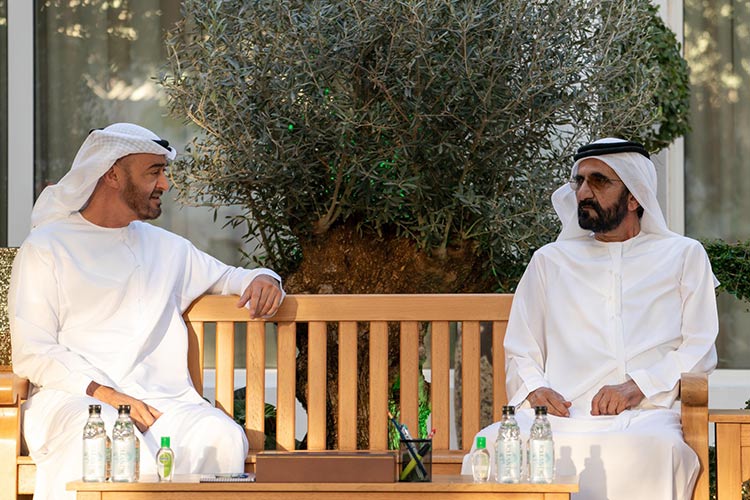 Zayed Al Nahyan, Crown Prince of Abu Dhabi and Deputy Supreme Commander of the UAE Armed Forces, on Sunday, to discuss a host of issues related to the welfare and wellbeing of the nation’s citizens.

The two leaders also discussed measured taken to protect Emirati community by the provision of world-class health and social services, as well as high standards of living.

Their Highnesses commended efforts made by national competent bodies and disaster management committees to protect the local community from diseases and epidemics.

They also affirmed the commitment of the leadership, government and national authorities to safeguard and maintain the public health and safety of both Emirati citizens and residents.

The number of novel coronavirus (Covid-19) cases globally stood at 163,930 with 6,420 deaths, across 141 countries and territories on Sunday.

Dubai, the regional tourism and business hub, shuttered cinemas, arcades and gyms over the fear of coronavirus spread in the country.

Dubai's large Global Village shopping and entertainment market, which runs from November to March each year, said it was closing early. The UAE capital Abu Dhabi shut down public beaches and parks.

The Dubai Airports has issued an update for travellers regarding flights in accordance with the directives of the General Authority of Civil Aviation (GACA) in the UAE, health authorities and related authorities, stressing the need for travellers to check their airline before travelling.

In a notice, it said that, as of March 17, the UAE would temporarily suspend the issuance of all entry visas except for holders of diplomatic passports. This also excludes travellers who have visas issued before the 17th of this month.

The Dubai Airports also stated that travellers who hold passports from countries (45 countries) that do not require issuing entry visas to the UAE can still continue to travel to and from the UAE, indicating that passengers may undergo an additional medical examination.

Travelers who arrive from any of these countries: Italy - Rome and Lebanon until 16 March, the People's Republic of China - Beijing and Syria until 16 March, and Thailand will undergo thermal examination and nasal screening.

As part of the precautionary measures taken to curb spread of the new coronavirus, the GHQ of the Sharjah Police has suspended receiving all visitors to the Traffic and Licensing Centre in the Ramtha area in Sharjah, the test centers, including the registration village and the “Motor Check.”

It called on community members to use smart services through the Ministry of Interior (moi) application and the Sharjah police application.

Ajman announced a temporary closure of wedding halls, gym and massage centers until the end of March. It has announced the installation of thermometers in shopping centers in Ajman in line with the preventive measures for the Covid-19.

Iran on Sunday urged its citizens to stick to guidelines and stay at home to stop the new coronavirus spreading, as it announced another 113 deaths from the outbreak.

The latest death toll announced by the health ministry took to 724 the official number of people to have been killed by the disease since last month.

People "should cancel all travel and stay at home so that we may see the situation improving in the coming days," ministry spokesman Kianoush Jahanpour said in a televised news conference.