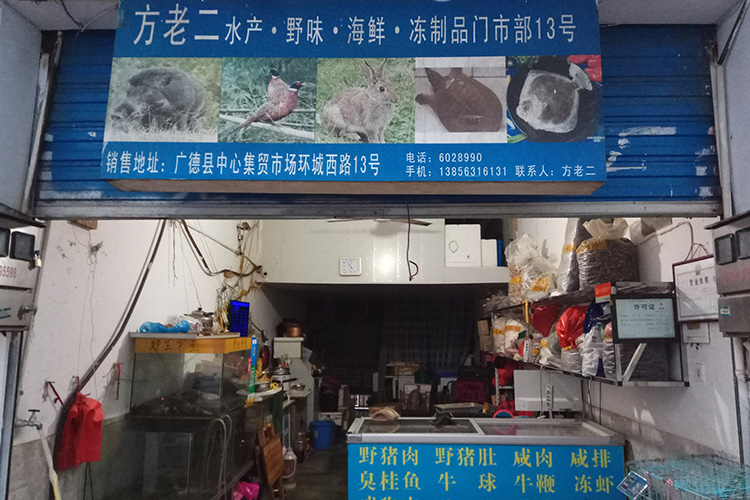 The exterior of a store suspected of selling trafficked wildlife is seen in Guangde city in central China's Anhui Province. AP

It could become the first Chinese city to declare cat and dog meat illegal if the proposition passes with public support.

Among the list of nine permitted meats, Shenzhen officials pointedly left out additional famous delicacies whipped up from snakes, frogs and turtles in light of the creeping pandemic that germinated in Wuhan.

While the exact source of the virus is still under investigation, most health experts and virologists have been eyeing the wildlife market in the outbreak city ever since the first COVID-19 patients emerged nearby.

Shenzhen’s urgent proposal stated that the banning of wildlife consumption was a common practice in developed countries and was a universal requirement of modern civilization.

Snake might be animal reservoir of novel coronavirus Study

"Although the trade in Shenzhen is fairly small compared with the rest of province, Shenzhen is still a huge city and is larger than Wuhan, so this would be very significant and could even have a domino effect with other cities following," commented Peter Li, China policy specialist for animal welfare organisation Humane Society International.

Li added that the World Health Organisation does not deem cats and dogs as carriers of the new coronavirus but the trade could halt potential contagions: “The dog meat trade causes immense cruelty to our companion animals and poses a huge human health risk for other diseases such as rabies.”

The city’s draft underscored the position of cats and dogs in society as domestic pets while it awaits legislative power from the public to declare the ban legal.

Humane Society International endorsed statistics and studies that revealed majority of Chinese citizens do not, in fact, consume dog meat and wish to see a complete ban on the annual Yulin dog meat festival and dog trade in general.

Shenzhen plans to enforce the ban through penalties that could go up to 50,000 Yuan (7,130 USD approx.) if market vendors are caught selling prohibited meat. As for the public, a fine of 20,000 Yuan (2,850 USD approx.) applies on eating protected animals.

In the past, most of China’s legislative wildlife trade bans have been temporary–the SARS outbreak is a case in point, which had originated from the consumption of bats and civets in Shenzhen’s province of Guangdong in 2003.

With animal-borne pathogens becoming increasingly pervasive, ecologists anticipate the launch of a worldwide ban on the multi-billion dollar industry.

Pet cats and dogs cannot pass the new coronavirus to humans, but they can test positive for low levels of the pathogen if they catch it from their owner.