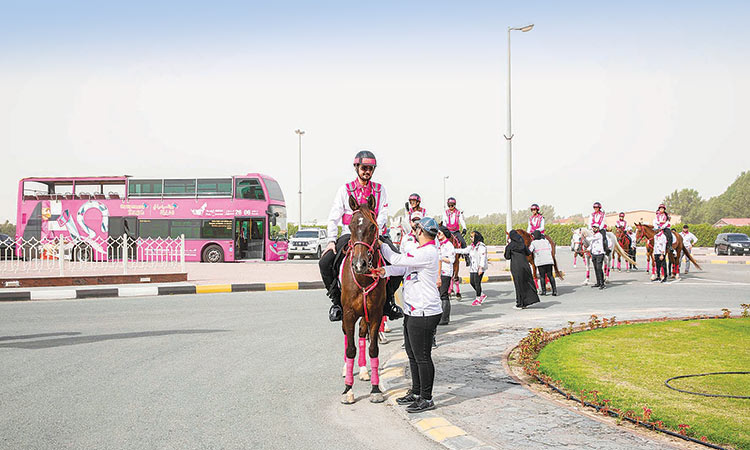 These fixed clinics, operational from 4 p.m. to 10 p.m. until Mar. 6 (Friday) are in the following locations:

The locations were sourced from “Route & Medical Schedule” booklet distributed to guests and the media at the Wednesday flag-off of the caravan from the Sharjah Equestrian and Racing Club led by His Highness Sheikh Dr. Sultan Bin Muhammad Al Qasimi, Member of the Supreme Council and Ruler of Sharjah and Her Highness Sheikha Jawaher Bint Mohammed Al Qasimi, Wife of the Ruler of Sharjah and Founder/Patron of the Friends of Cancer Patients.

Gulf Today received enquiries for the locations and the schedules on Thursday morning.

Other locations have also been identified where men and women could go aside from the technologically-advanced mobile clinic.

As the PCR goes to Dubai this weekend, on Friday, the mobile clinic will be stationed at Kite Beach and on Saturday, at La Mer, from 2 p.m. to 10 p.m.

Other clinics in Dubai this Friday and Saturday are in Zabeel Park and Mamzar Park at 10 a.m. to 6 p.m., and at Dragon Mart and Town Centre Jumeirah, 2 p.m. to 10 p.m.

PCR organisers led by Higher Steering Committee chairperson Reem Bin Karam hopes to reach out to a bigger number of the population this year in order to mitigate breast cancer cases and more importantly, immediately address possible early stages of the disease.

PCR has so far “caught” 75 breast cancer cases out of over 64,000 consultations in both genders since 2011. With the help of public and private institutions as well as residents, the patients and their families have been provided with assistance.

Some patients have recovered, are being monitored, and are grateful to the PCR and the Sharjah leadership.

Separately, City Sightseeing Sharjah (CSS) is allocating the proceeds of one of its tour buses to support the 10th edition of the Pink Caravan Ride (PCR), a pan-UAE breast cancer awareness initiative launched by Friends Of Cancer Patients (FOCP), which commenced yesterday (Wednesday, February 26) in Sharjah.

All proceeds raised by the CSS tour bus until the end of March 2020 will be donated to Pink Caravan, which concludes its ride on March 6. This effort is aimed at supporting a noble and humanitarian cause in addition to fostering values of volunteering and charity amongst the community.

To draw attention to the breast cancer awareness drive, the CSS, launched by the Sharjah Investment and Development Authority (Shurooq) in collaboration with the City Sightseeing Worldwide, has decorated the tour bus in pink to align with PCR’s objectives, which aims to spread awareness on breast cancer and highlight the importance of early detection.

Tickets are available at all of CSS’s stops in Sharjah, as well as at key shopping malls and tourist destinations. These include Al Majaz Waterfront, Al Qasba, Mega Mall, Central Souk, and Sahara Centre, to name a few.

VIDEO: Fire breaks out in a car in Sharjah