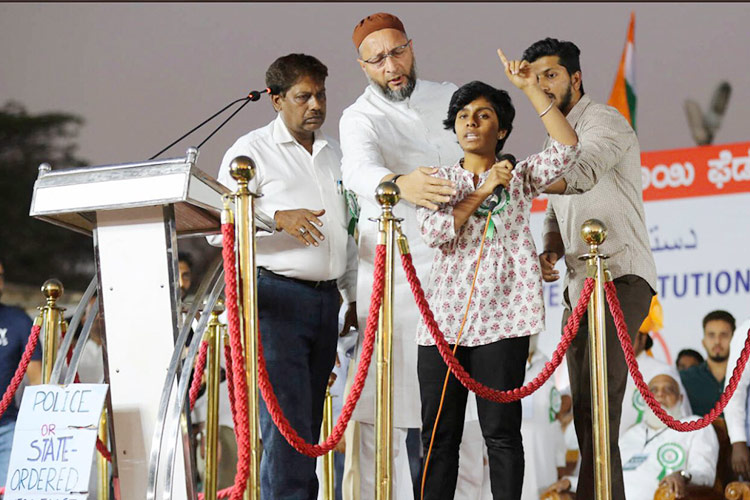 Asauddin Owaisi prevents her from raising the pro-Pakistan slogan.

A 19-year-old girl was arrested and sent to 14-day judicial custody for shouting "Pakistan zindabad" at an anti-CAA rally here a day ago, police said on Friday.

"Amulya was arrested after we booked her under sections 124A, 153A and 153B of the IPC in a sedition case filed suo-motu for raising pro-Pakistan slogans at an anti-CAA rally," a police official told reporters.

The police produced Amulya earliar in the day at the residence of Judge Shamsheen Ankur, who sent her on a 14-day judicial custody.

Amulya was whisked away from the dais on Thursday for shouting "Pakistan zindabad" at the anti-CAA rally organised by the Hindu-Muslim-Sikh-Issai Federation at the Freedom Park in the city, where AIMIM president Asauddin Owaisi was present and prevented her from raising the pro-Pakistan slogan.

Attacking the AIMIM and Owaisi, the Karnataka unit of BJP tweeted: "'Anti-CAA Activist Amulya Leona shouts PAKISTAN ZINDABAD in the presence of AIMIM Chief @asadowaisi at Bengaluru. Truth is that protests against #CAA are a joint venture between Pakistan & Anti-National Forces led by @INCIndia. Those who support Pakistan should go there forever."

Owaisi reportedly has clarified that his party has no links with Amulya.

Amulya's father Leona Noronha has condemned his daughter's act. Speaking to the media, he said: "said: "What she said is wrong. She was joined by some Muslims and wasn't listening to me!"

In the video that went viral within minutes of the incident on Thursday evening Amulya was seen taking lead as speaker on the dias, even as Owaisi and other leaders were still getting on to the podium.

A number of men, including Owaisi and police men and oragnisers tried to stop her. Speaking in Kannada, she was heard telling "Pakistan Zindabad", when stopped and pulled by men around her, she fought to get back and shouted "Hindustan Zindabad". There was much confusion.