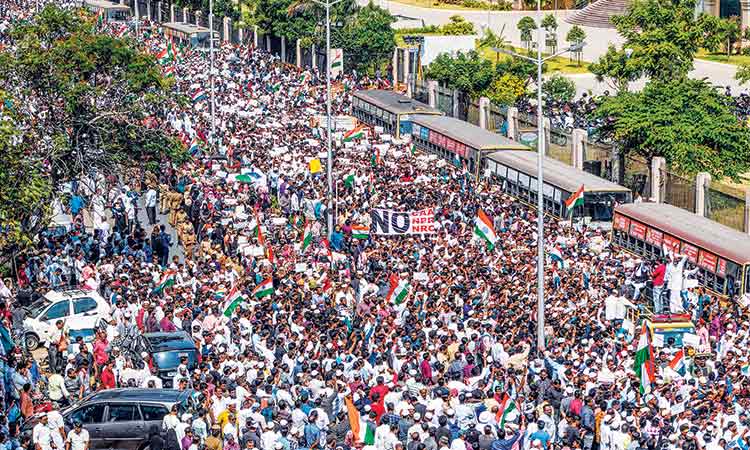 People take part in a protest against the CAA in Chennai on Wednesday. Agence France-Presse

Thousands joined protests on Wednesday across Tamil Nadu and the neighbouring Union Territory of Puduchery, opposing the Citizenship Amendment Act (CAA), the National Population Register (NPR) and the National Register of Citizens (NRC).

In Chennai, crowds overflowing the streets, defying court orders, marched demanding that the State Assembly pass a resolution rejecting the legislations that have outraged the secular population of the country.

Thousands of people took part in the march, which started at 10am from Kalaivanar Arangam.

A coalition of 21 Muslim organisations had called for the march.

Protesters sitting at Washermanpet since Friday joined the march.

On Friday, police had assaulted protesters who had gathered there after noon prayers at the local mosque.

As word of the police assault spread, people rushed from various parts of Chennai and joined the sit-in.

Many protesters were detained for holding a demonstration without prior police permission, and were later released. Protesters allege that the situation escalated after some of them were forcibly removed from the protest site, leading to a commotion between them and the police.

The development also triggered protests elsewhere in the state, and most cities saw large gatherings.

On Wednesday, six days after the protests started, it continued unabated.

A clash occurred when police tried to apprehend various Muslim movements involved in the protests near Kannan Roundabout in Old Washermenpet.

Three protesters were injured in the police assault while the police claimed four of their personnel were wounded in stone-throwing.

Wednesday’s march was held despite the Madras High Court passing an interim order on Tuesday denying permission for the march, which was seen as a plan to lay siege in the Assembly.

A bench of Justices M Sathyanaraya and R Hemalatha had passed the order on a plea seeking direction to the police to restrain the protesters from holding the rally.

The court order restrained “any political or Muslim organisation” from going ahead with the procession.

The court made it clear that it was not expressing any opinion on CAA, NRC and NPR.

State additional advocate general SR Rajagopoal told the court that any application seeking police permission for protest should be made five days prior, but in this case, the federation had moved the police only on Monday for the agitation proposed on Wednesday.

The petitioners submitted that the organisations have announced they would besiege the Assembly on Wednesday to bring pressure on the Anna DMK government to move a resolution opposing the controversial legislations.

They alleged that “the innocent public was being incited” to join such protests and create problems by spreading rumours.

The judges granted an interim injunction till March 11, restraining the Federation of Tamil Nadu Islamic and Political Organisations and its allied associations from organising the agitation.

Thameem Ansari, MLA of Manithaneya Jananayaga Katchi, said the court order did not restrict the federation from taking out the procession.

In fact, they did not seek permission for the same. Representatives of political parties, including the DMK and the MDMK, were also present in the march.

A temporary platform was set up at Walaja Road and senior leaders from Muslim organisations spoke. They ended the rally in Chennai on the condition that the resolution be passed within 24 hours against the CAA.

Thousands of police personnel were deployed on the roads to maintain law and order during the rally. The police, armed with protective gear, were instructed to arrest violators.

Commissioner of Police AK Viswanathan confirmed that protesters would be detained as the court had denied permission for the march.

Over 4,000 police personnel were deployed in and around Chepauk.

Earlier in the Assembly, DMK, the main opposition party, attempted to move an anti-CAA resolution, but Speaker P Dhanapal disallowed it.