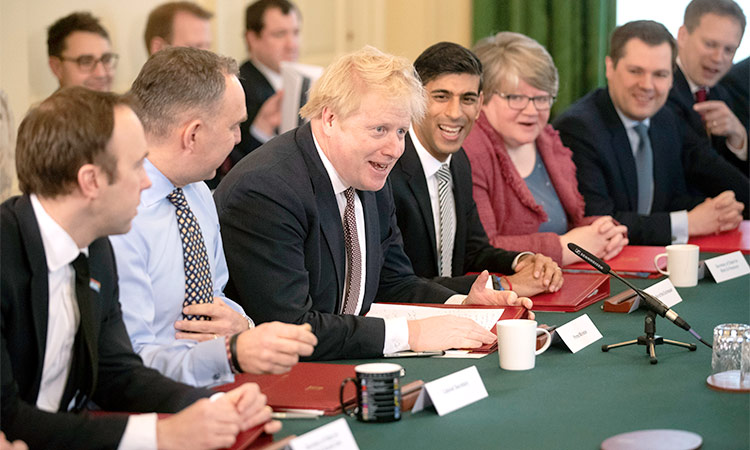 Boris Johnson speaks during his first cabinet meeting after a reshuffle in London on Friday. Associated Press

“It’s great to see you all here and congratulations to you all on achieving, or indeed retaining, the great offices of state that you hold,” Johnson told cabinet before posing for photographs.

“We have to repay the trust of people who voted for us in huge numbers,” he said.

Johnson has increased the proportion of cabinet ministers from privately educated backgrounds, with nearly two-thirds of his top team having attended a fee-paying school.

Despite boasting he would put together a cabinet “to truly reflect modern Britain” when he entered Downing Street, members of his top team are nine-times as likely to have been privately educated than the general population.

The research comes after the unexpected resignation of chancellor Sajid Javid, who attended a comprehensive school, in protest at Dominic Cummings-driven power grab to give No 10 greater control over the Treasury.

Of the 26 ministers now attending cabinet, 17 received a private education – or 65 per cent – compared with just 7 per cent of the general population.

Two ministers also attended grammar schools while seven received their full education in a state school, or 27 per cent.

Seizing on the make-up of the new cabinet, the Liberal Democrats said: “Boris Johnson’s claims that Brexit can ‘unleash the full potential’ of the UK is a hard pill to swallow when his cabinet does nothing more than reflect the same, entitled old boys’ network.

Christine Jardine, the party’s equalities spokesperson, added: “Beyond all the bluster, the make-up of Boris Johnson’s cabinet reinforces just how little the Conservatives care for ensuring opportunities are spread fairly across our country.”

According to the educational charity Sutton Trust, the proportion of alumni of independent schools in Johnson’s last cabinet stood at 64 per cent – more than twice that of the team assembled by Theresa May in 2016.

The figure is also higher than David Cameron’s cabinet in 2015, where 50 per cent had attended fee-paying schools, but significantly lower than the 91 per cent in Margaret Thatcher’s first administration in 1979.

The analysis also points out that of the 26 ministers attending the cabinet, including the prime minister, 50 per cent also attended either Oxford or Cambridge.

Yet, in July last year, when Johnson won the Tory leadership race, Downing Street vowed: “Boris will build a cabinet showcasing all the talents within the party that truly reflect modern Britain.”

Sir Peter Lampl, founder and chair of the Sutton Trust, said: “December’s election led to a seismic shift in the political landscape.

“The falling of the red wall means Conservative MPs now represent a much more diverse range of constituencies than before, with constituents from many different socio-economic backgrounds.

“Yet in terms of educational background, the make-up of Johnson’s cabinet is still over 60 per cent from independent schools.

“Today’s findings underline how unevenly spread the opportunities are to enter the elites and this is something Boris Johnson must address.”

In relation to gender, just seven women are now attending cabinet – down from eight in the cabinet put together by Johnson when he became prime minister in July 2019. There is also one fewer black, Asian and minority ethnic member of the cabinet.

Preparations for Britain’s next budget continue at pace and the government will have a clear fiscal framework, a spokesman for Johnson said on Friday when asked whether the budget would still be unveiled on March 11.

“We will continue to have a clear fiscal framework and ... that is confirmed at budget,” the spokesman told reporters. “Preparations for the budget continue at pace.”