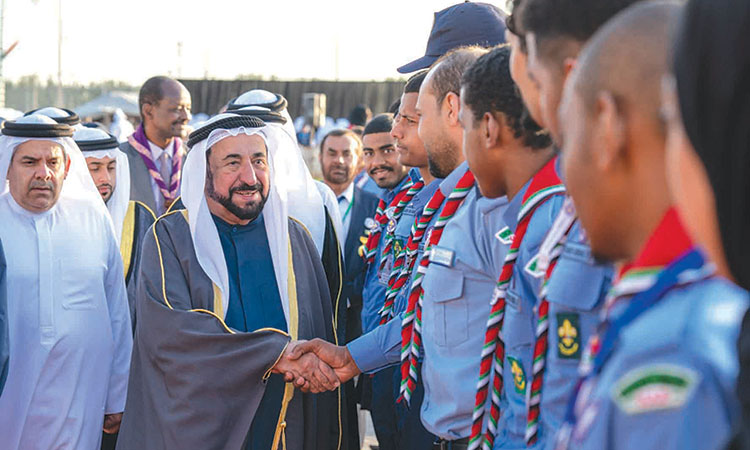 His Highness Dr Sheikh Sultan Bin Mohammed Al Qasimi, Supreme Council Member and Ruler of Sharjah attended on Thursday the opening ceremony of the ninth international scout gathering, held under the slogan “Everyone to Sharjah .. Sharjah for all,” at the Sharjah Scouting Commission.

The event saw the participation of delegations from 94 countries from all over the world.

The celebration started with the national anthem of the United Arab Emirates and recitation of verses from the Holy Quran. Major General Abdullah Saeed Al Suwaidi, General Supervisor of the gathering delivered a speech in which he welcomed Sheikh Sultan and the attendees.

Al Suwaidi said, “The Sharjah Scout Commission is proud to cooperate with the Emirates Scout Association and the Arab Scout Organization - The Arab Scout Region on this occasion which will take place until Feb 19 and will be celebrated through an integrated scouting, tourism and heritage programme all around Sharjah.”

Amr Hamdi, Secretary-General of the Arab Scout Organisation and the Regional Director of the World Scout Organisation, said, “Since 2004, for sixteen years, the doors of Sharjah have been open to the youth of the world, welcoming them with all the friendliness, brotherhood, and Arab generosity, upon the encouragement of Sheikh Sultan who believes in youth and their abilities and also believe in the need to build leaders able to contribute effectively in their local and international societies. “

During the ceremony, the attendees enjoyed scouting performance by students of Sharjah schools.

His Highness the Ruler of Sharjah then honoured the personalities chosen for this year including Amr Hamdi, Layla Abdul Salam Al Din, Adel Mohammad Karam, and Abdul Rahman Abdullah Jaber, for their contribution to the scouting movement and its development and for the sincere efforts they made in the UAE and the Arab world.

Sheikh Sultan also toured the exhibitions of the participating delegations, where he listened to detailed explanations of the exhibits of each country, which varied between heritage works, textiles and popular food, and the most important national and famous products.

Sheikh Sultan, at the end of the tour, saluted the participants and welcomed them in the Emirate of Sharjah, wishing them a pleasant stay and a safe return.

The occasion will go on from 10th to 19th of Feb, under the theme “Scouting and Tolerance.”

Such international scout gatherings aim to achieve the lofty vision of the scout movement, which is to consolidate the bonds of brotherhood, relationship and love.

It is also to exchange experiences and knowledge between the world by introducing the United Arab Emirates in general and the Emirate of Sharjah in particular, and to advance the progress of tourism and urbanisation made in the UAE, and raise the country’s name within the international scouting platforms.

The 9th ‘International Scout Gathering represents scouting societies in various regions of the world, in collaboration with the Emirates Scout Association and the Arab Scout Organisation in the Arab Region, at the headquarters of the scout camp in Sharjah.

The regions include Arab, African, and Asian regions, as well as, Eurasian, European, American, and Pacific regions, among others.

Sheikh Sultan recently commended the efforts of institutions and societies concerned with combating non-communicable disease, NCD, under the leadership of H.H. Sheikha Jawaher bint Muhammed Al Qasimi, Patron of the Global NCD Alliance Forum, to prevent the risk of these diseases and save the lives of millions of people around the world.

In his welcome address at the inauguration ceremony of the third Global Non-Communicable Diseases Alliance, NCDA, forum in Sharjah, Sheikh Sultan also stressed on the need to unite community efforts to safeguard people’s health and wellbeing by promoting healthy habits, rally against bad lifestyle choices and introducing effective vaccinations.