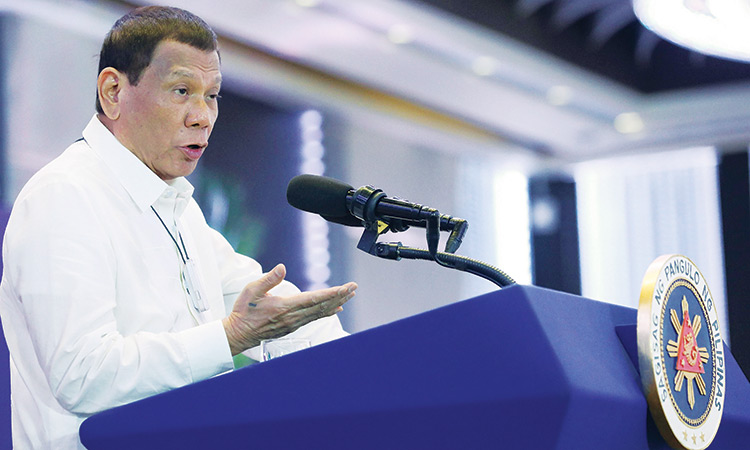 President Rodrigo “Rody” Duterte revealed he rejected an attempt of US President Trump and other officials to “save” a defense agreement that allows Filipino and American soldiers to conduct annual “war games”  even as the government on Tuesday took the first official step leading to its abrogation.

“Now, I’ll make it public, I am a public official. Trump and the others are trying t save the Visiting Forces Agreement (VFA). I told them I don’t want to,” Duterte told a gathering of local government officials in suburban Pasay City in Metro Manila on Monday night in a mix of Filipino and English.

However, Duterte did  not confirm whether  he talked with Trump on the issue  over the phone and neither did he say when even as Salvador Panelo, the presidential spokesman, on Tuesday disclosed that the government has already taken the first step in abrogating the 20-year-old agreement.

“The executive secretary (Salvador Medialdea) sent the message to (Foreign) Secretary Teddyboy Locsin who signed the notice of termination and sent to the US government today,” Panelo told a Malacanang Palace media briefing.

In turn, Locsin confirmed in his Twitter account that he already sent the letter which was received by the deputy chief of mission of the American embassy in Manila.

In a related development, the Senate adopted a resolution urging Duterte to reconsider his order abrogating the VFA to enable the members to conduct a “thorough review” and make sure that it would not adversely affect not only the security and economy of the Philippines but also those of other nations. The resolution, sponsored by Senate President Vicente Sotto as well as a bipartisan set of lawmakers, warned VFA’s cancellation would have a major impact and might worsen the already existing regional tension arising from the unresolved territorial dispute between China and members of the Association of Southeast Asian Nations (Asean) in the South China Sea.

In particular, four of the 10 Asean members — the Philippines, Brunei, Malaysia and Vietnam — are involved in such dispute as some of them accused  Beijing of “militarizing” the contested islands particularly those in the Spratlys acknowledged by experts to be rich not only in fisheries but also in natural gas and petroleum.

Significantly, freshman Senator Ronald dela Rosa, a close Duterte ally and the former chief of the Philippine National Police (PNP) that led the bloody and violent war on illegal drugs abstained from the voting.