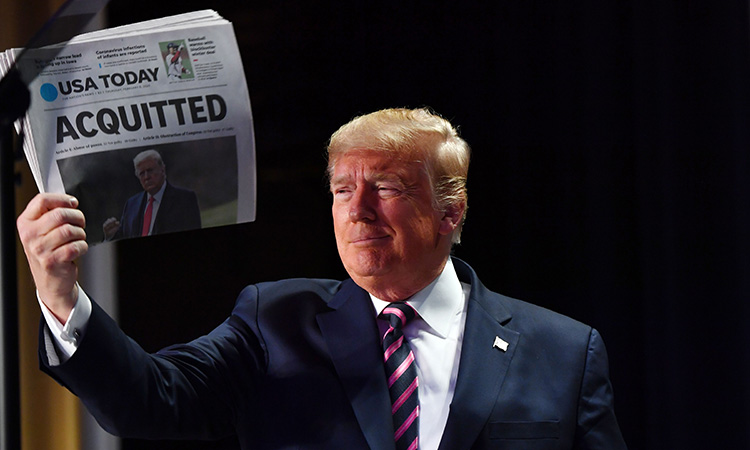 Donald Trump holds up a newspaper that displays a headline 'Aquitted' as he arrives to speak at the 68th annual National Prayer in Washington on Thursday. AFP

President Donald Trump unleashed his fury against those who tried to remove him from office at a prayer breakfast Thursday, a day after his acquittal by the Senate in his impeachment trial.

Speaking from a stage where he was joined by congressional leaders, including Democratic House Speaker Nancy Pelosi, who led the impeachment charge against him, Trump shattered the usual veneer of bipartisanship at the National Prayer Breakfast in Washington.

"As everybody knows, my family, our great country and your president have been put through a terrible ordeal by some very dishonest and corrupt people," Trump said at the annual event.

His airing of grievances came hours before he was to deliver a formal response to the impeachment vote at the White House.

"They have done everything possible to destroy us and by so doing very badly hurt our nation,” said Trump, who triumphantly held up copies of two newspapers with banner "ACQUITTED" headlines as he took the stage.

Trump tweeted after the Senate vote that he would mark his acquittal with a statement at noon Thursday to "discuss our Country’s VICTORY on the Impeachment Hoax!” The president's supporters were being invited to join him in the East Room.

With Chief Justice John Roberts presiding, senators sworn to do "impartial justice” stood and stated their votes for the roll call - "guilty” or "not guilty” - in a swift tally almost exclusively along party lines. Trump, the chief justice then declared, shall "be, and is hereby, acquitted of the charges.”

On the first article of Impeachment, abuse of power, the vote was 52-48 favouring acquittal. The second, obstruction of Congress, also produced a not guilty verdict, 53-47.

The president and his allies sent giddy tweets needling his accusers and Democrats.

In his first message once the trial closed, Trump posted an animated video using a Time magazine cover to suggest he would remain in office "4EVA." Democrats handed some more good news to Trump. The Iowa caucuses, the nation's first presidential nominating contest, was thrown into disarray by a tabulating mishap. That deprived any candidate of a clear victory and allowed Trump to paint the Democrats as incompetent and corrupt.