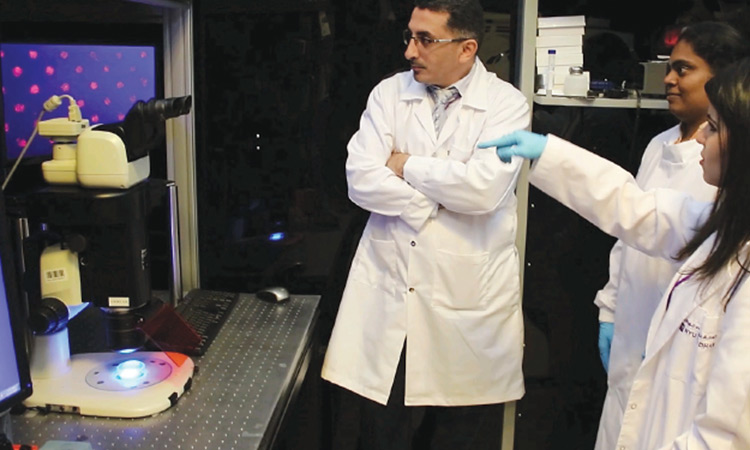 This new approach produces comparable results but requires significantly less storage space and greatly offers advantages over storing, managing, and distributing vials of cryopreserved cells. These findings provide a promising prospect for industrial cell banks and researchers engaged in tissue engineering, drug testing, and other fields that rely on long-term, successful preservation of cells. The new technique may potentially find applications in the field of biobanks, a repository that stores biological samples for research purposes.

The conventional preservation approach places cells in small vials where their metabolic activities are “frozen” at extremely low temperatures (-80 ºC or below, typically -196 ºC for long-term storage). Although effective for cell retrieval, these approaches require large spaces to store a vast number of vials, which makes the management and distribution of cells highly challenging, time-consuming, and expensive.

As NYUAD Assistant Professor of Mechanical and Biomedical Engineering Mohammad A. Qasaimeh and colleagues explain in the study, “Paper-based Cell Cryopreservation,” published in the journal Advanced Biosystems, a conventional filter paper made of cellulose fibers offers a simple and robust alternative, allowing for easy loading and efficient freezing of cells. The method is space-saving and simple to manage since large sheets of papers can be rolled or folded during their storage, and later cut into small pieces during the retrieval of cells without a need to thaw the entire platform. “The paper platform, working as a 3D shield and carrier for cells during cryopreservation, greatly simplifies the storage, management, and logistics of cell banking,” said lead researcher and corresponding author Qasaimeh.

The researchers report that the paper’s porosity and 3D cellulose fiber network offer a highly protective environment for the cells to retain their viability and content during preservation. As a result, after their freeze, thawed cells are efficiently released from paper with viability rates comparable to conventional methods. The paper additionally favors the cryopreservation of 3D cell cultures; and after the thaw, it provides a versatile environment for the remaining cells within the paper to form 3D cell constructs (spheroids).

“Unlike other scaffold-based cryopreservation strategies such as fiber meshes and nanofiber sheets, where the substrates must be repeatedly engineered for their use in cell cryopreservation, this paper-based method is solely based on the ready-to-use papers where cells are preserved with no significant effect on their viability and metabolic activity,” said Roaa Alnemari, a former Research Assistant with Qasaimeh’s lab.

“In addition to its practical advantages, the method also enables investigations of the in situ-formed spheroids in multiple dimensions and over time, and it opens the door for high-throughput, cost-effective biological assays,” said Research Assistant at NYUAD Pavithra Sukumar.

“We can localise spheroids on multiple microspots within the paper to expand the applicability of the method to wider applications, such as stacking the paper sheets on top of each other to mimic different forms of in vivo 3D tumor masses,” said Research Scientist at NYUAD Muhammedin Deliorman.

NYU Abu Dhabi is the first comprehensive liberal arts and science campus in the Middle East to be operated abroad by a major American research university. NYU Abu Dhabi has integrated a highly-selective liberal arts, engineering and science curriculum with a world center for advanced research and scholarship enabling its students to succeed in an increasingly interdependent world and advance cooperation and progress on humanity’s shared challenges. NYU Abu Dhabi’s high-achieving students have come from more than 115 nations and speak over 115 languages. Together, NYU’s campuses in New York, Abu Dhabi, and Shanghai form the backbone of a unique global university, giving faculty and students opportunities to experience varied learning environments and immersion in other cultures at one or more of the numerous study-abroad sites NYU maintains on six continents.