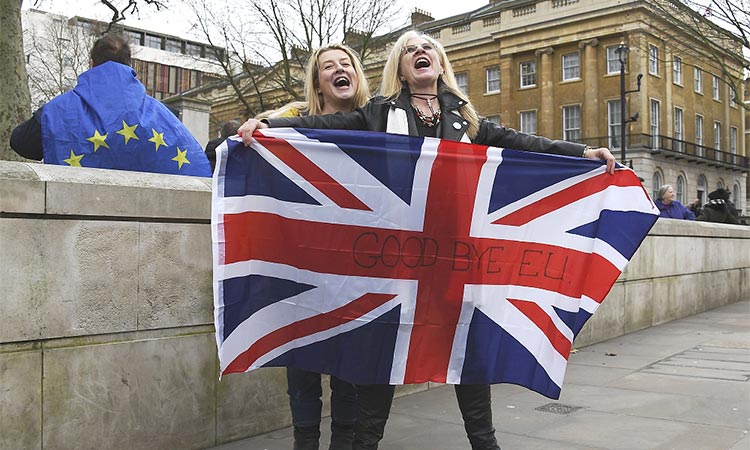 Brexit supporters hold the Union Jack with a text reading "Goodbye EU" next to a person wearing the EU flag in London. AP

Britain has left the European Union after 47 years of membership, taking a leap into the unknown in a historic blow to the bloc.
Brexit became official Friday at 11 p.m. in London and midnight in Brussels, where the EU is headquartered.

Thousands of enthusiastic Brexit supporters gathered outside the U.K. Parliament in London cheered as the hour struck. In a recorded message, British Prime Minister Boris Johnson called Britain’s departure "a moment of real national renewal and change” that would lead to a bolder, more energetic nation.

But many Britons mourned the loss of their EU identity. And there was sadness in Brussels, where British flags were quietly removed from the bloc’s many buildings.

Bidding a sad adieu to the first country to leave the European Union, French President Emmanuel Macron called Brexit a "historic alarm signal” that should force the EU to improve itself.

European officials removed the British flag outside the European Parliament buildings in Brussels and Strasbourg on Friday and took it down from the European Council.

The flags were removed from the main institutions of the bloc four hours ahead of Britain's midnight departure, symbolising its withdrawal from the European Union. 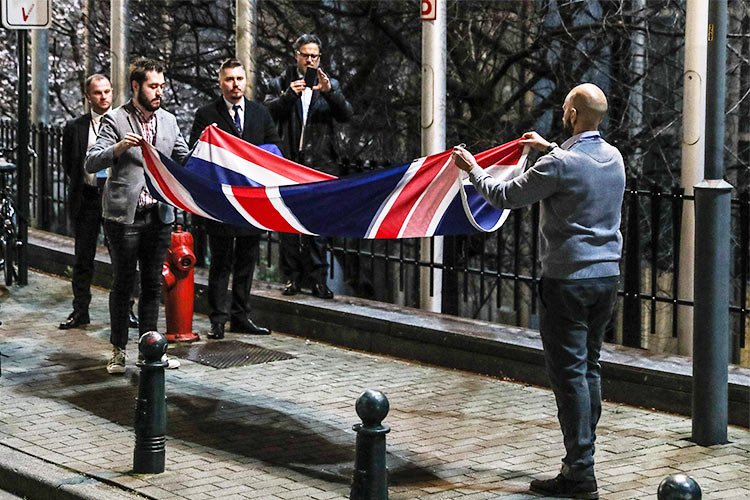 Staff members take down the United Kingdom's flag from outside the European Parliament building in Brussels.  AFP

The blue and gold EU flag was raised in place of the British one, alongside those of the 27 remaining member states, 47 years after the UK first joined the union.

The United Kingdom leaves the European Union (EU) on Friday, its most significant change of course since the loss of its empire — and a major blow to 70 years of efforts to forge European unity from the ruins of two world wars. 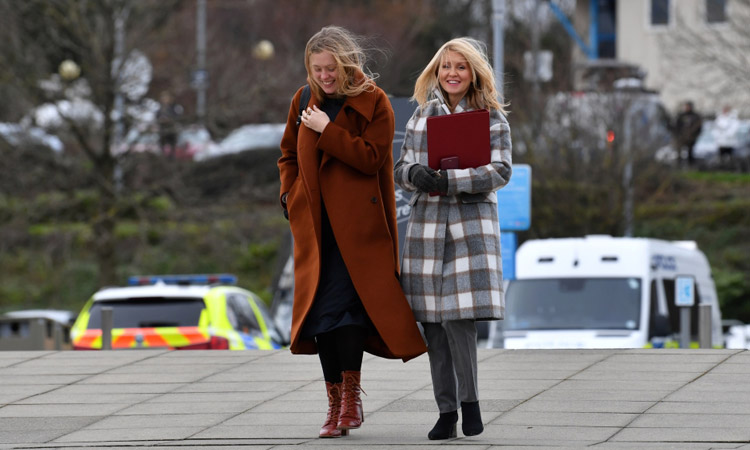 Britain's Minister of State for Housing Esther McVey arrives to attend a cabinet meeting at the University of Sunderland. Reuters

As the EU's most reluctant member prepared to cast off an hour before midnight, Brussels warned that leaving would always be worse than staying, while Britons either side of the Brexit divide expressed either sadness or delight.

After the numerous twists and turns of a 3-1/2-year crisis, the final parting is an anticlimax of sorts: Britain steps into the twilight zone of a transition period that preserves membership in all but name until the end of this year.

At a stroke, the EU will lose 15% of its economy, its biggest military spender and the world's international financial capital - London. 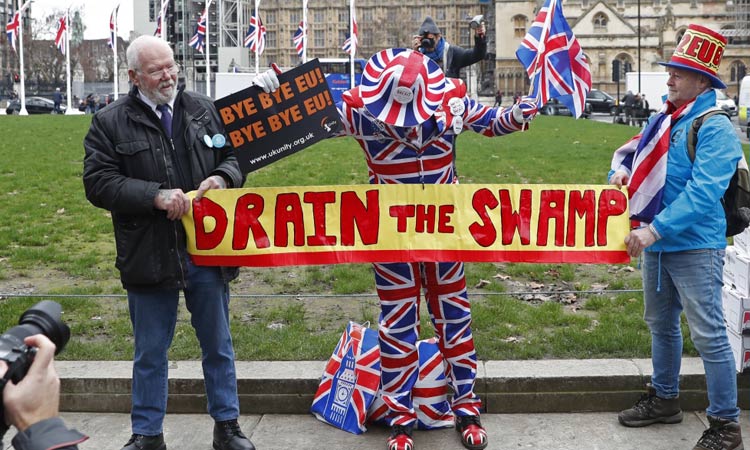 Prime Minister Boris Johnson planned to celebrate with English sparkling wine and a distinctly British array of canapés including Shropshire blue cheese and Yorkshire puddings with beef and horseradish.

"This is the moment when the dawn breaks and the curtain goes up on a new act," said Johnson, one of the leaders of the "Leave" campaign in the 2016 referendum. "It is a moment of real national renewal and change."

Beyond the symbolism of the Union Jack flag being lowered in Brussels after 47 years, little will actually change until the end of 2020, by which time Johnson has promised to strike a broad free trade agreement with the EU, the world's biggest trading bloc.

'LET'S HOPE IT'S A SUCCESS'

The EU cautioned that leaving meant losing the benefits of membership, though the United States said Britons wanted to escape the "tyranny of Brussels."

For proponents, Brexit is "independence day" - an escape from what they cast as a doomed German-dominated project that is failing its 500 million people. 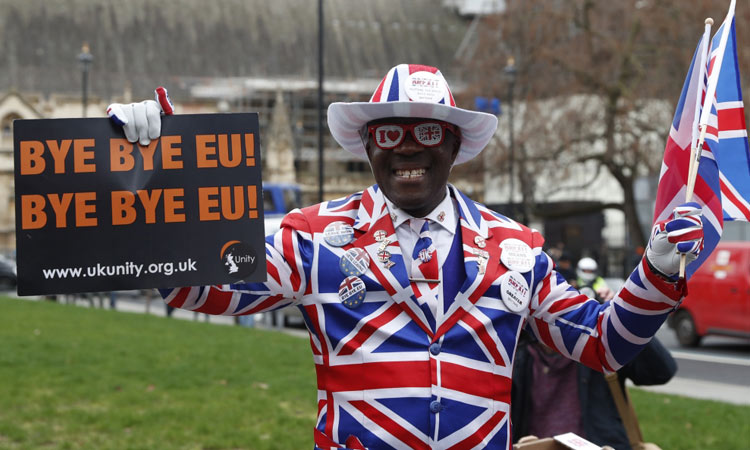 A Brexit supporter holds a sign in Parliament Square in London. AP

Opponents believe Brexit is a folly that will weaken the West, shrivel what is left of Britain's global clout, undermine its economy and ultimately lead to a more inward-looking and less cosmopolitan set of islands in the northern Atlantic.

"It's a very sad day," said Roger Olsen, a 63-year-old engineer. "I think it is a disaster. An absolutely wrong thing. And I think time will prove that we have taken the wrong course."

Brexit was always about much more than Europe. 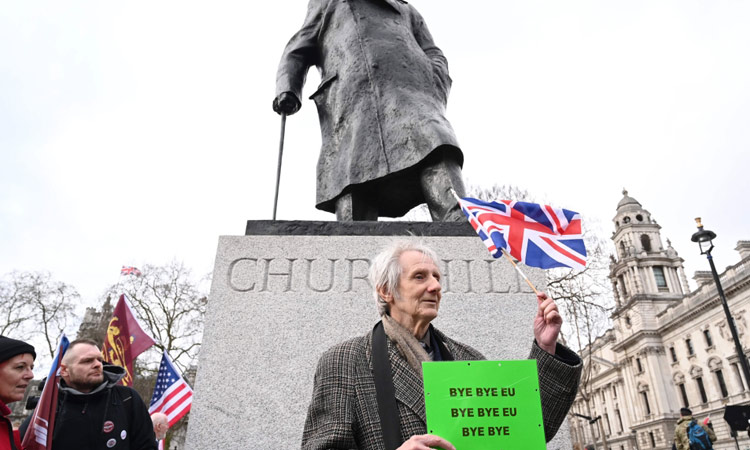 An elderly man waves the Union flag as he holds a placard under a statue of Winston Churchill in London. AFP

The referendum, which split voters 52% to 48%, showed up deep divisions and triggered soul-searching about everything from secession and immigration to empire and modern Britishness.

So severe was the Brexit meltdown that allies and investors were left astonished by a country that for decades had seemed a confident pillar of Western stability.

At home, Brexit has tested the ties that bind the United Kingdom: England and Wales voted to leave the bloc but Scotland and Northern Ireland voted to stay.

Scotland's First Minister, Nicola Sturgeon, used the moment to demand a second independence referendum. A poll on Thursday suggesting a slim majority of Scots would now back a split because of Brexit.

So on "Brexit Day," some Britons will celebrate and some will weep — but many will do neither. Many are simply happy that years of political wrangling about the divorce are over.

"To be honest, I think it's been going on for so long now, I just wanted to see it done with," said Lee Stokes, a 44-year-old project manager. 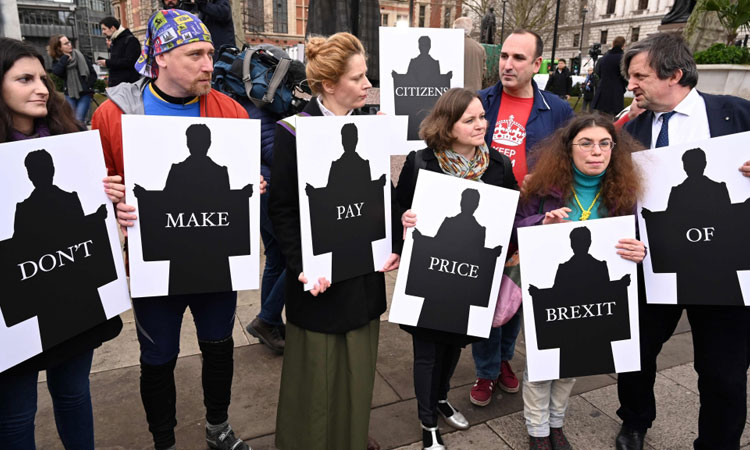 People hold placards in Parliament Square opposite the Houses of Parliament in London. AFP

Brexiteers hope departure will herald democratic and economic reforms to reshape Britain and propel it ahead of its European rivals, which they say are chained to a doomed single currency.

Supporters of membership say Britain will atrophy and have little option but to cosy up to US President Donald Trump. A Times newspaper cartoon had Johnson leaping out of the EU frying pan into the fire of Trump's orange hair.

"Britain’s place in the world will change," said outgoing opposition Labour Party leader Jeremy Corbyn. "The question is what direction we now take."

Across the EU, citizens bade farewell with sorrow or hope of a return, but also some support for Brexit - especially in Greece and Poland. 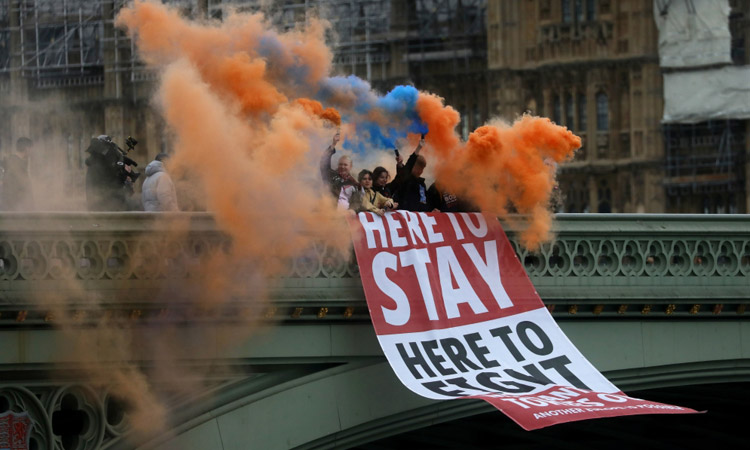 People place a banner on Westminster bridge, on Brexit day, in London. Reuters

Johnson was chairing a cabinet meeting in Sunderland, the first city to declare a majority of votes for leaving the EU. Brexiteers will celebrate on Parliament Square. 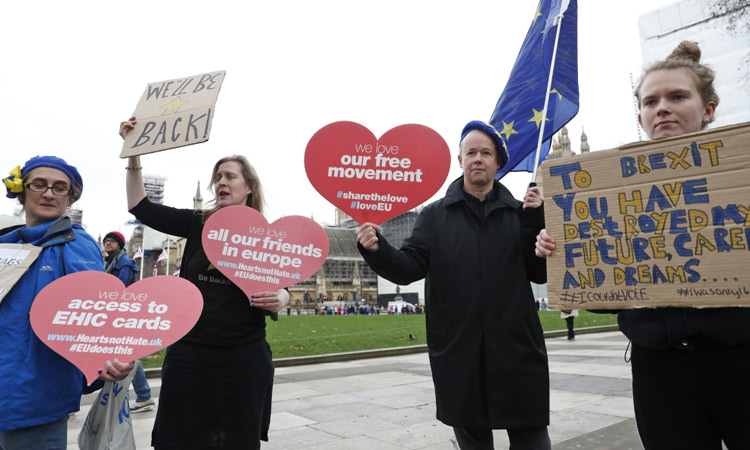 A Union Jack in the building of the European Council in Brussels was scheduled to be lowered at 7pm (1800 GMT) on Friday, and put away with the flags of non-EU countries.

"We should have done it a long time ago," said Helen Brown, 50, in Dagenham, east London. "I'm glad Boris has finally pulled his finger out. It will be tough at first. But I think it will be good for the country in the long run."