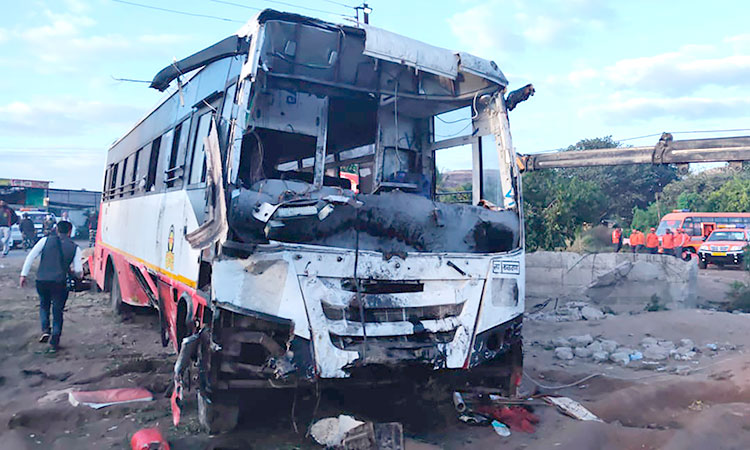 A man walks past the mangled remains of a bus after an accident in Nashik, India, on Wednesday. AP

Twenty-six people including a seven-year-old girl were killed after the bus they were travelling in crashed with an autorickshaw and fell into a well in western India, officials said Wednesday.

Emergency crews worked through the night to rescue survivors and retrieve bodies and used a crane to remove the red-and-white bus from the well, as hundreds thronged the crash site after the accident late on Tuesday.

"We conducted rescue operations throughout the night and recovered 26 bodies. Another 32 injured have been sent for treatment," National Disaster Response Force spokesman Sachidanand Gawde told AFP.

The bus driver was among the dead.

"In this hour of sadness, my thoughts are with the bereaved families. May the injured recover at the earliest," Modi tweeted.

India has some of the world's highest traffic fatalities with more than 150,000 deaths annually due to poor roads, badly maintained vehicles and reckless driving.

At least 37 dead after bus falls into canal in India

At least 37 passengers were killed when a bus plunged into a canal in the central Indian state of Madhya Pradesh on Tuesday, police told AFP.

Dead man resurrected to life seconds before his burial in Lebanon