No Palestinian can accept state without Jerusalem as capital: Abbas - GulfToday

No Palestinian can accept a state without Jerusalem as capital: Abbas 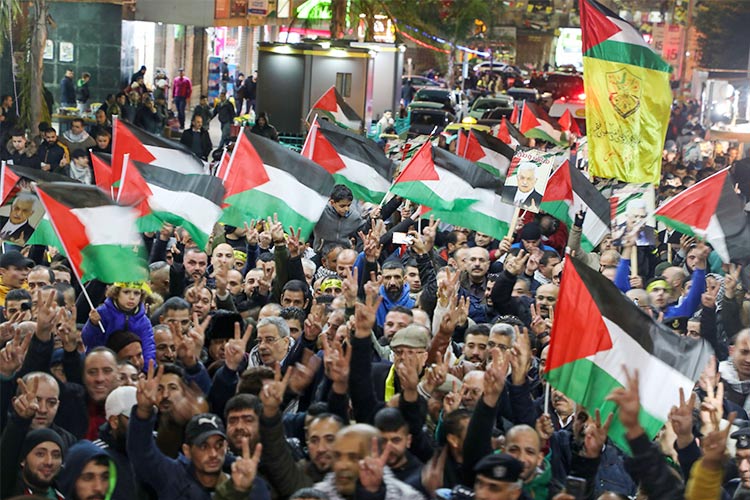 Palestinians take part in a demonstration in the West Bank city of Nablus. AFP

US President Donald Trump unveiled his long-awaited Middle East peace plan on Tuesday, calling for the creation of a State of Palestine with its capital in portions of east Jerusalem, saying it is a “win-win” opportunity for both Israel and the Palestinians.

The plan calls for the creation of a State of Palestine with its capital in portions of east Jerusalem, ending speculation as to whether his administration, in preparing a proposal without input from Palestinian leaders, would abandon a “two-state resolution” to the conflict.

But the map showed the West Bank remaining riddled with Jewish settlements linked to Israel and only a long road tunnel connecting the area with the seaside Gaza Strip.

The plan makes clear that Israel is free to annex its settlements on Palestinian lands right away.

On the flashpoint issue of Jerusalem, Trump said Israel should retain control over the city as its "undivided capital," Trump said. At the same time, the Palestinians would be allowed to declare a capital within occupied East Jerusalem, he said.

The Hamas Islamist movement, which runs the Gaza Strip, said it could never accept compromise on Jerusalem being capital of a future state.

Trump, releasing the plan before a pro-Israel audience at the White House with Prime Minister Benjamin Netanyahu by his side, acknowledged that he has done a lot for Israel, but he said he wanted the deal to be a “great deal for the Palestinians.” 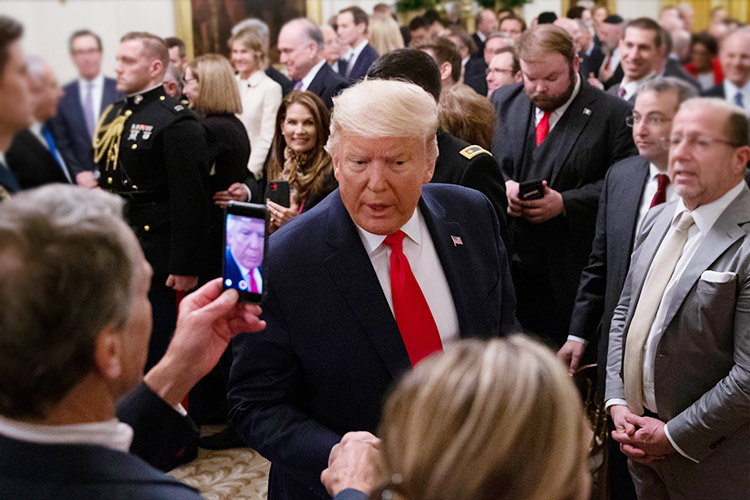 Donald Trump greets visitors as he leaves the East Room of the White House in Washington. AP

Trump said the deal is a “historic opportunity” for Palestinians to achieve an independent state of their own.

Palestinian president Mahmud Abbas rejected Trump's proposal for peace with Israel on Tuesday, vowing the plan unveiled in Washington will "not pass."

Abbas made the statement in the West Bank city of Ramallah following a meeting of various Palestinian factions including Hamas, which pledged to "resist the deal in all its forms."

Abbas also said, “No Palestinian can accept a state without Jerusalem as capital.”

Jordan meanwhile warned against any Israeli "annexation of Palestinian lands" and reaffirmed its commitment to the creation of a Palestinian state along the 1967 lines, which would include all the West Bank and Israeli-annexed east Jerusalem. 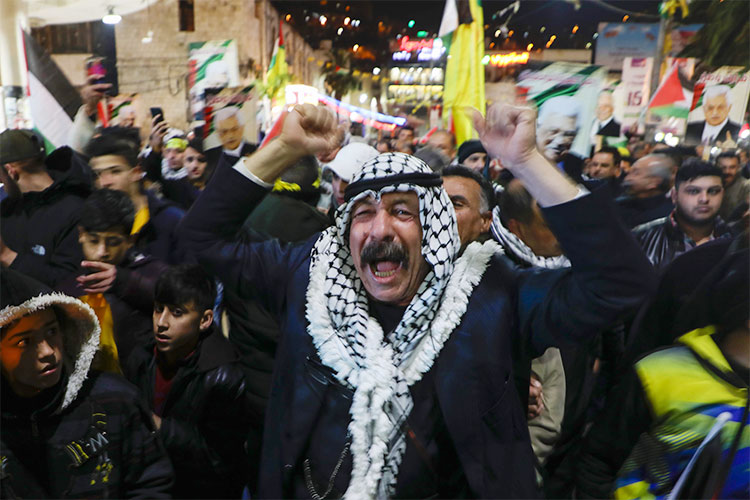 Palestinian protesters wave the national flag during a demonstration in the West Bank city of Ramallah. AFP

Foreign Minister Ayman Safadi warned of "the dangerous consequences of unilateral Israeli measures, such as annexation of Palestinian lands.”

Hossam Zaki, the pan-Arab body’s deputy secretary, told reporters on Tuesday that Palestinian president Mahmoud Abbas would attend to discuss the “so-called Deal of the Century.” Abbas sought Hamas’ participation in the meeting.

The extraordinary meeting comes on the back of a Palestinian request to the League, which is headquartered in Cairo.

Trump said he wrote to Palestinian leader Abbas on the plan. 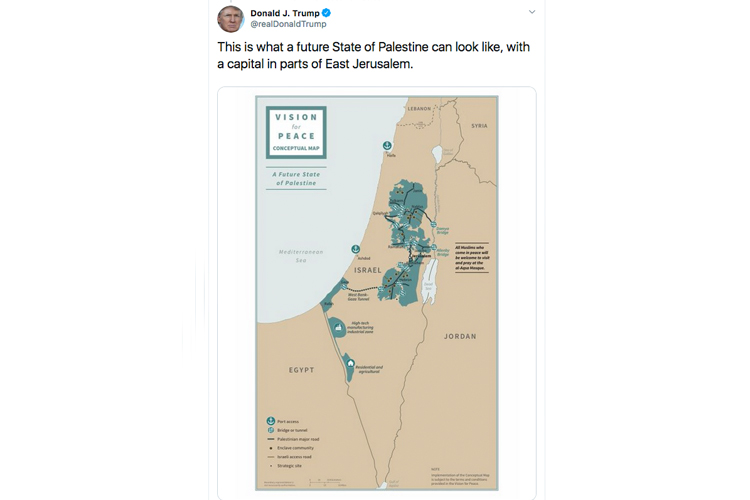 The plan more than doubles the territory currently under Palestinian control, although it also recognises Israeli sovereignty over major settlement blocs in the West Bank, something to which the Palestinians will almost certainly object.

Netanyahu on Tuesday touted the Trump administration’s Middle East peace plan, saying it presented a “realistic path” for achieving a lasting peace in the region.

The Palestinians have already rejected the proposal, accusing Trump of being biased in favour of Israel as he has adopted policies that bolster Israel at their expense. 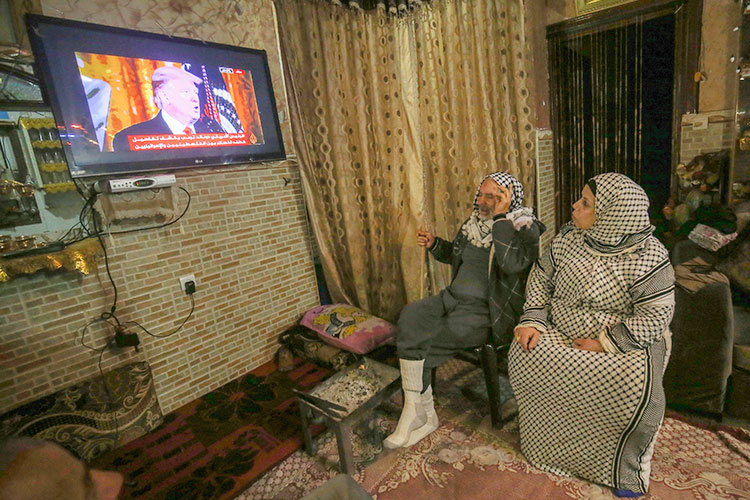 The plan does call for a four-year freeze in new Israeli settlement construction, during which time details of a comprehensive agreement would be negotiated.

However, it was not immediately clear if the freeze could be extended if a final deal is not concluded in the four years.

Trump’s statements on his Mideast plan are “aggressive” and his proposals for Jerusalem are “nonsense,” an official with the Hamas said on Tuesday.

“Trump’s statement is aggressive and it will spark a lot of anger,” Sami Abu Zuhri, whose Hamas group rules in the Gaza Strip, told reporters. 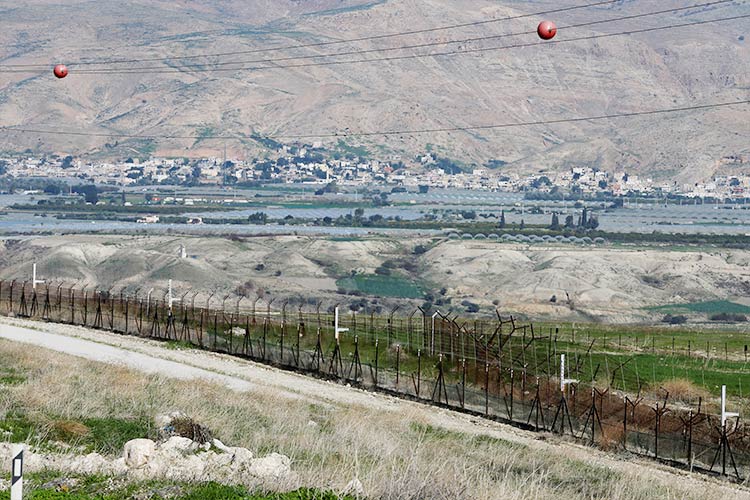 A view shows the Jordanian borders near Jericho in the Israeli-occupied West Bank. Reuters

Iranian President Adviser Ashena says the Trump peace plan is one-sided and calls it a plan of imposition and sanctions.

UK PM Johnson and Trump discussed the United States’ proposal for peace between Israel and the Palestinians, which could prove “a positive step forwards,” says Downing Street spokesperson.

The 50-page political outline goes further in concessions to the Palestinians than many analysts had believed was likely. However, it would require them to accept conditions they have been previously unwilling to consider, such as accepting West Bank settlements.

It builds on a 30-page economic plan for the West Bank and Gaza that was unveiled last June and which the Palestinians have also rejected, Under the terms of the “peace vision” that Trump’s son-in-law and senior adviser Jared Kushner has been working on for nearly three years, the future Palestinian state would consist of the West Bank and Gaza, connected by a combination of above-ground roads and tunnels.

Netanyahu and his main political challenger in March elections, Benny Gantz, had signed off on the plan. 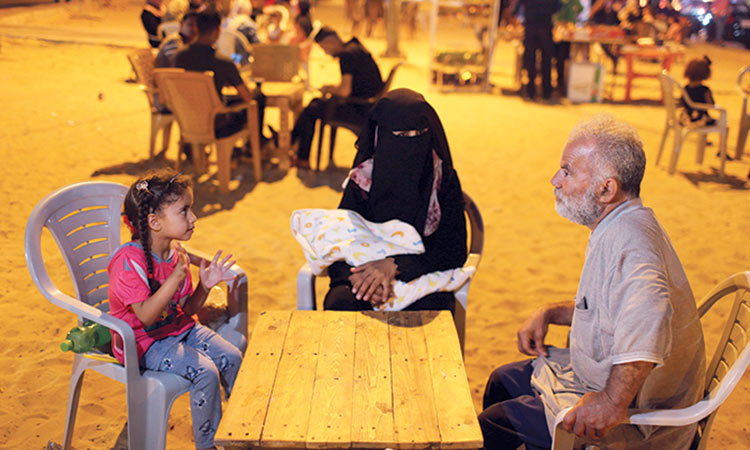 The White House said it decided against inviting the Israeli government because the PA would not be there. Several Gulf Arab states, including Saudi Arabia, will participate in the June 25-26 US-led gathering in Manama.