No confirmed cases of coronavirus in Pakistan, says NHS - GulfToday 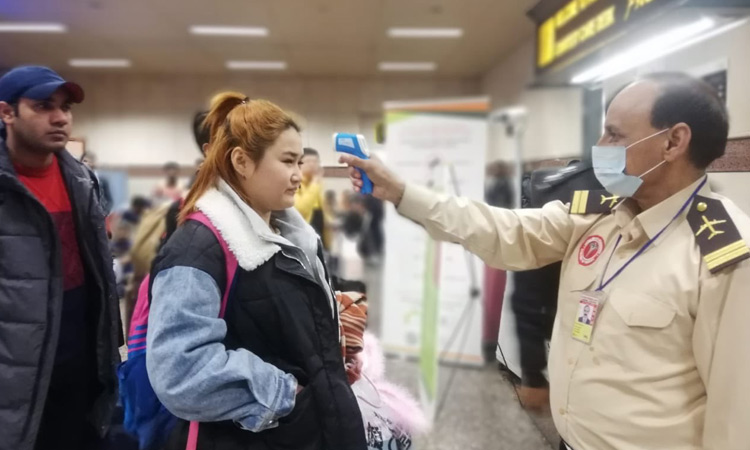 An official uses an infrared thermometer to check the temperature of a tourist who arrives at Lahore airport on Saturday. Twitter photo

There are approximately 28,000 Pakistani students all over China, around 800 resident traders and around 1,500 Pakistani traders who travel to China frequently, according to a statement issued by the embassy of Pakistan in Beijing. 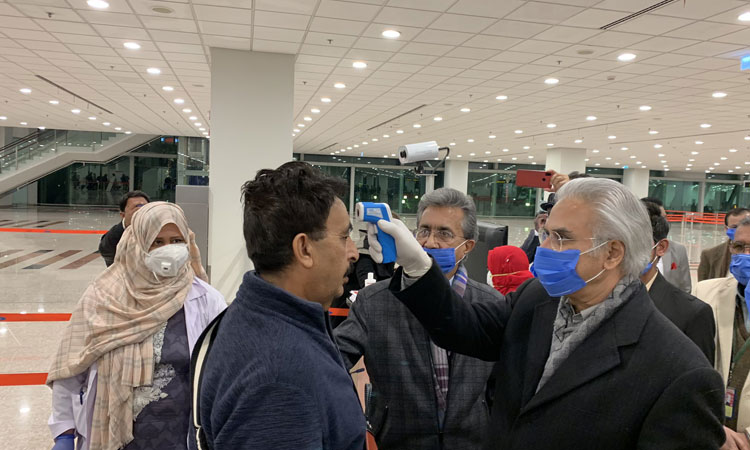 A health official checks the temperature of a passenger at Islamabad Airport on Saturday. Twitter photo

"There are close to 500 students in Wuhan alone. These numbers have to take into account the fact that many of our students come to China either on self-financing or on the scholarships offered by the Chinese and they don’t always register with the embassy. Similarly, our traders and other visitors from Pakistan also don’t always register with the embassy. So the embassy has an approximate estimation,” the statement says.

"Pakistani community members and students in Wuhan are advised to comply with the efforts of Chinese health authorities for curbing the spread of novel coronavirus (NCV). The embassy urges Pakistani students to remain vigilant and adopt good personal hygiene practices. In case of any reports of viral infection in members of Pakistani community/students, it is requested to cooperate with local health authorities and share immediately the complete information with Pakistan’s embassy in Beijing,” it says.

China locks down city at centre of virus outbreak

Meanwhile as panic has been triggered across Pakistan after rumours that the first case of the NCV has been reported in Multan, the Ministry of National Health Services (NHS) has declared it incorrect and misreporting by media. 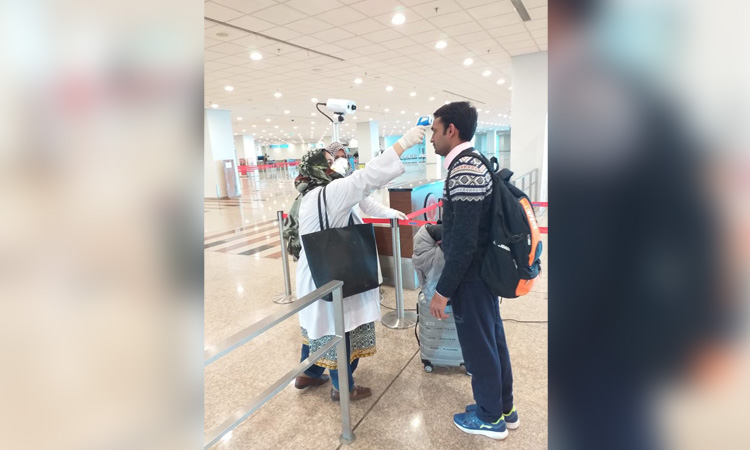 A health worker uses an infrared thermometer to check the temperature of a passenger at Islamabad Airport on Saturday. Twitter photo

"There is no confirmed case of NCV from Pakistan as we speak (Saturday 9:00pm). There is an outbreak in China so as per international protocols we have to be vigilant and keep every suspected passenger, who has history of travelling to China, under observation,” Special Assistant to Prime Minister (SAPM) on Health Dr Zafar Mirza said. 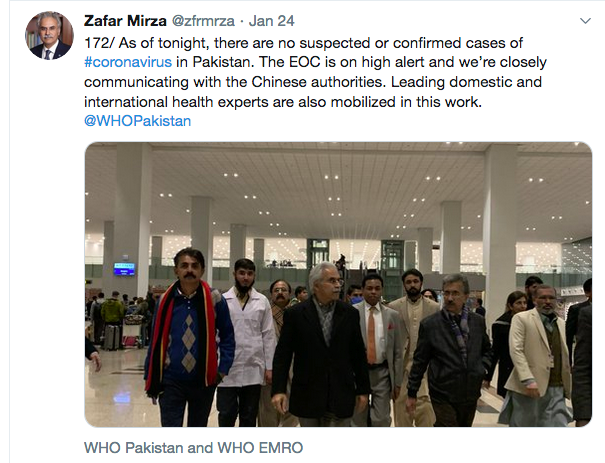 "Fact is that on Jan.21 a Chinese national was taken under observation from Multan Airport as he was having fever. The passenger, who is a male in mid 20s, has been showing signs of improvement which shows that he is not suffering from the severe acute respiratory infections, which is the major sign of NCV,” he said.

Mirza said that despite signs of improvement, the patient’s samples had been collected and were being checked. 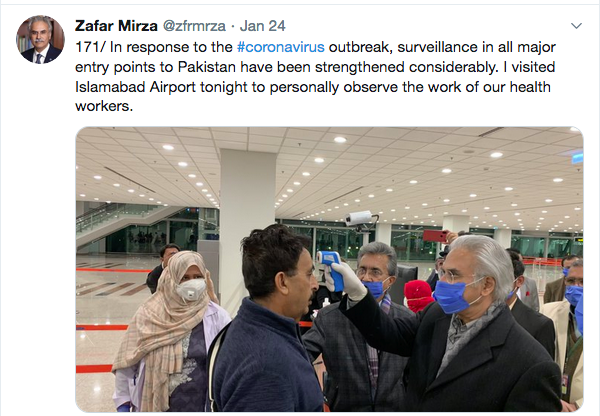 "A part of media is incorrectly reporting about diagnosis of first case of NCV in Pakistan. We expect responsible reporting by media. Please do not add to the nation’s anxiety about NCV and meticulously check facts before reporting. Thank you” Mirza stated in a Tweet.

However, two people suspected of having contracted the coronavirus have been admitted to the Nishtar Hospital in Multan.

A 40-year-old Chinese national, Feng Fen, was brought to the hospital on Friday night with symptoms similar to those of coronavirus. 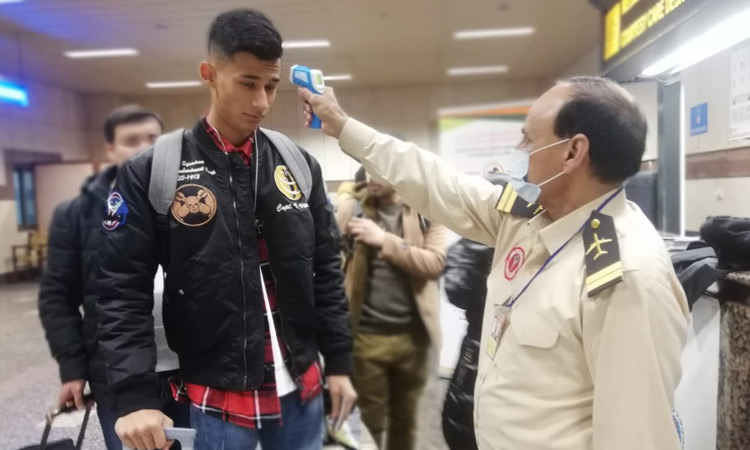 An official checks the temperature of a passenger at Lahore Airport. Twitter photo

Feng had arrived at Karachi airport on PIA flight PK332 on Jan.21 from Wuhan, to visit the Multan-Sukkur motorway project of the China-Pakistan Economic Corridor. He is an employee of the China State Construction Engineering Corporation and was staying at a camp at the Industrial Estate in Multan.

According to hospital sources, another patient, identified as Rahmatullah, resident of Multan, has also been admitted to the hospital with the same symptoms. Rahmatullah had been visiting China in connection with his business and returned to Pakistan on Jan.24.

Nishtar Medical University Vice Chancellor Dr Mustafa Kamal Pasha said the suspected coronavirus patients were under treatment and being provided proper medical care. He said that blood samples of both patients had been sent to National Institute of Health, Islamabad. 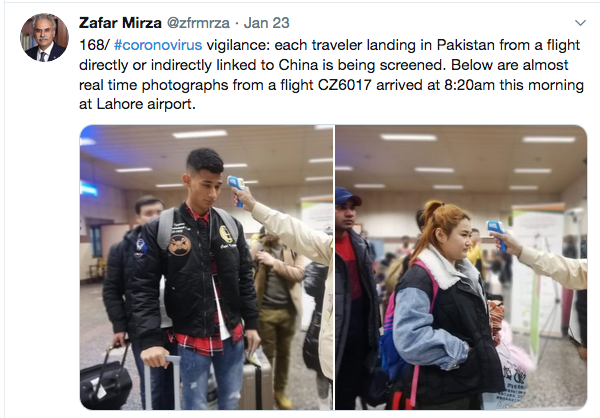 He further said that the patients had been kept in the isolation ward and were being administered medicines meant for sore throat and flu.

"The medicines are showing results as the patients are recovering speedily, which is why we are hoping that they are not victims of coronavirus and are rather suffering from normal flu and seasonal throat infection. However, their treatment is under way while adopting all guidelines and parameters set by the World Health Organisation,” he added. 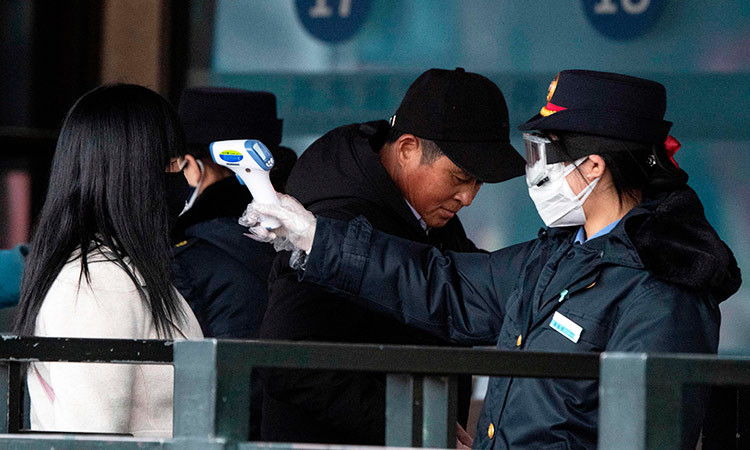 The Philippines has reported the first death outside China from the coronavirus that has killed over 300 and spread to other countries, the World Health Organization said Sunday.