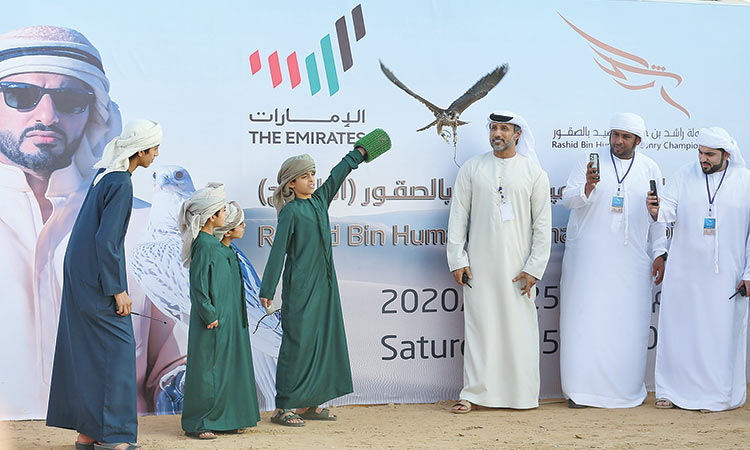 Budding young falconers at the competition.


Falconers from all over the UAE participated with a record number of 556 falcons in the Dhs1 million worth 4th edition of the Rashid Bin Humaid Falconry Championship, at Al Yasmeen area in Ajman.

The championship is being held under the patronage of Sheikh Rashid Bin Humaid Al Nuaimi, Chairman of Ajman Municipality and Planning Department and organised in cooperation with the Hamdan Bin Mohammed Heritage Center (HHC).

The big increase in the number of participating falcons came after the decision of the organising committee to open the competition for birds that did not finish in Top 10 in the major falconry championship, including the Fazza Championship for Falconry-Telwah. The organisers also limited the participating falcons to Farkh or falcons under one year of age.

Ahmed Rashid Al Shamsi, Event Director, expressed his happiness at the success of the championship, stressing that the competition was aimed at promoting the UAE heritage among its citizens and residents under the directives of His Highness Sheikh Humaid Bin Rashid Al Nuaimi, Supreme Council Member and Ruler of Ajman; and Sheikh Rashid Bin Humaid Al Nuaimi, Chairman of Ajman Municipality.

“Opening the competition to novice and amateur falconers paved the way for wide participation from the general public,” he noted.

Al Shamsi also thanked the HHC for sharing their expertise in running large-scale competitions. He added that with the great turnover of participants, the organisers are thinking of expanding the tournament and make it into a two-day event.

Souad Ibrahim Darwish, HHC Director of the Championships, for her part said: “The HHC is always ready to support any championship or an activity related to heritage sports in all parts of the country. We share the best practices that we have learned in the many years that we have been organising and managing various events and activities that preserve and promote the UAE heritage.”

Darwish also took note of the efforts of the organising committee. “We see every year a great demand to join the falconry championship and this is indicative of professionalism, dedication and hard work of everyone,” she underlined.