Situation grave but we will win battle, says Xi - GulfToday 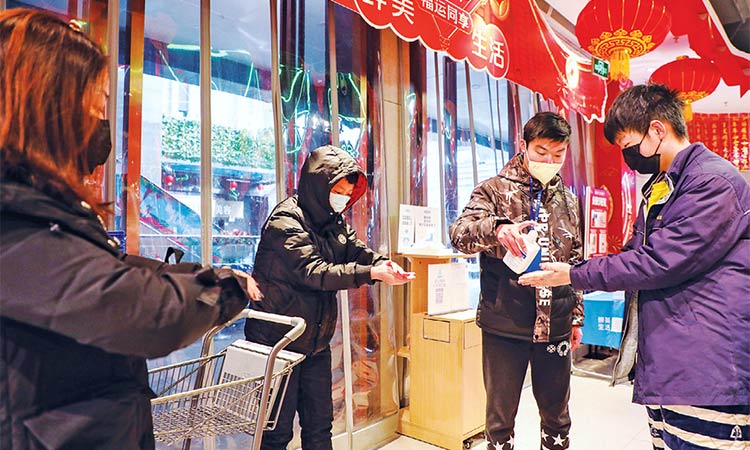 A worker dispenses handwash to shoppers in Wuhan on Saturday. Associated Press

The world’s most populous country scrambled to contain the disease that has already infected nearly 1,300 people, building a second field hospital to relieve overwhelmed medical facilities and closing more travel routes as the country marked the Lunar New Year holiday.

Beijing will suspend long-distance bus service entering and leaving the capital of 20 million people from Sunday due to “requirements of epidemic prevention and control,” the official People’s Daily newspaper reported. The National Health Commission also ordered nationwide measures to detect and isolate people carrying the virus on planes, trains and buses across the country.

Xinhua said on Saturday that temperature screening checkpoints have been set up in 387 railway stations across the country.

Underscoring fears that the virus could spread further, overseas Chinese tour groups will be suspended from Monday while domestic trips have already been halted.

Temples locked their doors, Beijing’s Forbidden City, Shanghai Disneyland and other major tourist destinations closed, and people cancelled restaurant reservations ahead of the holiday, normally a time of family reunions, sightseeing trips and other festivities in the country of 1.4 billion people.

After more countries reported cases, Xi said at a Communist Party leadership meeting on the disease that China was “faced with the grave situation of an accelerating spread of the new coronavirus” but that the country will “definitely be able to win the battle,” according to state media.

The country’s most important celebration has been all but cancelled for at least 56 million people as authorities expanded travel bans across central Hubei province to try and contain the spread of the virus. In Wuhan, the epicentre of the emergency, 450 military medics were deployed to help treat patients in Hubei’s capital city, where a seafood and live animal market has been identified as the centre of the outbreak.

On Saturday, when they should have been celebrating the New Year, people waiting at one hospital in the city were angry and frustrated.

Foreign citizens were set to be evacuated from Wuhan within the next few days.

US Coffee chain Starbucks said it would shut all its stores in Hubei during the Lunar New Year festival for the “health safety” of staff and customers.

The government says most of the cases have been in Hubei and most of the deaths involved people who already suffered pre-existing health conditions.

Xi chaired a Communist Party leadership meeting which urged regional governments to make “the safety of the masses’ lives and their physical health a top priority”, state media said.

Xinhua said the Standing Committee agreed to set up a working group that would visit Hubei.

Aviation officials said at least 600, not the initial 137 tourists, are to return to Wuhan City as part of the government decision to tighten measures to isolate the Philippines from its deadly impact.

Carmelo Arcilla, the head of the Civil Aeronautics Board (CAB), disclosed the tourists were among those targeted to return home by batches by Monday at the latest, who arrived on separate flights from Wuhan in the Philippines.

Arcilla said Transportation Secretary Arthur Tugade approved the return of the tourists as scheduled in their package tours and did not give them time to extend their stay or to visit other parts in the Philippines. These included the 137 tourists from Wuhan who arrived in Kalibo, Aklan province in the Visayas on Thursday and spend Chinese New Year on the island resort of Boracay, that coincided with the lockdown of the Wuhan airport due to the coronavirus scare, Arcilla explained. 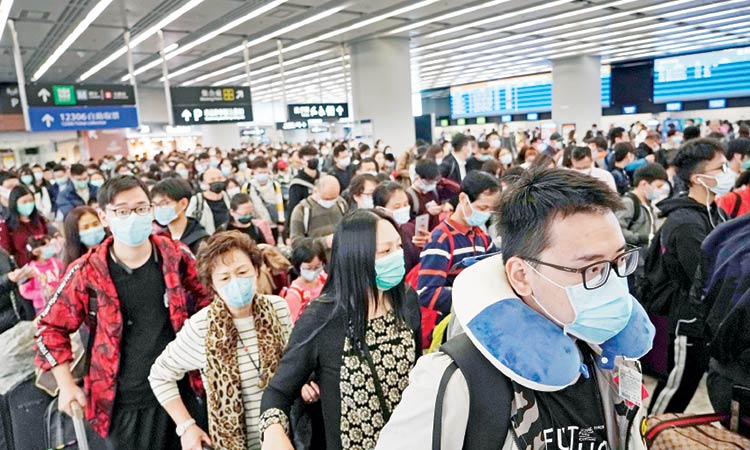 Investor nerves over the spread of a deadly new virus from China hammered equities and oil benchmarks on Thursday, as authorities moved to contain the disease,