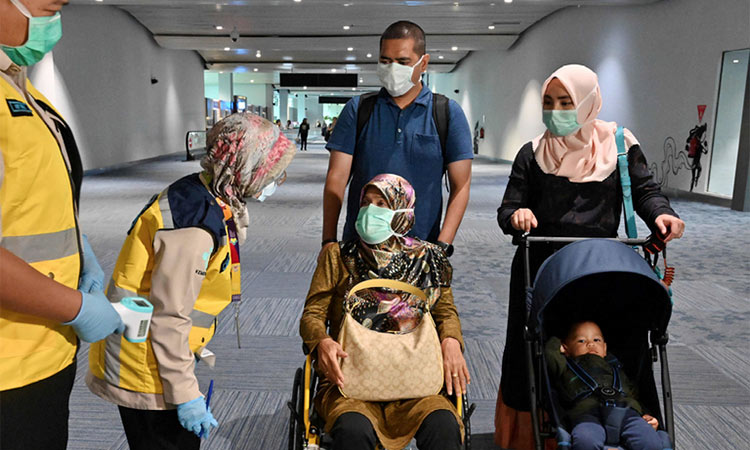 A health officer speaks to an Indonesian family at the Sukarno-Hatta international airport in Tangerang on Friday. Agence France-Presse


China expanded its lockdown against the deadly new virus to an unprecedented 36 million people and rushed to build a prefabricated, 1,000-bed hospital for victims on Friday as the outbreak cast a pall over Lunar New Year, the country’s biggest, most festive holiday.

The number of confirmed cases around the world climbed sharply to more than 850, with at least 26 deaths, all of them in China.

Most cases are in the central Chinese city of Wuhan, where the virus is believed to have originated in a market which traded in illegal wildlife, but cases have also been confirmed in the United States, Thailand, Hong Kong, Macau, Japan, Taiwan, South Korea, Singapore and Vietnam.

The US reported its second case, involving a Chicago woman in her 60s who was hospitalised after returning from China. She was reported to be doing well.

Fourteen people have been tested for the virus in the UK, with five confirmed negative and nine still awaiting results, Public Health England said.

Transportation was shut down in Wuhan, the city of 11 million at the epicenter of the outbreak, and in at least 12 other cities in central China’s Hubei province, encompassing a population bigger than that of New York, London, Paris and Moscow combined.

And authorities in Beijing and other cities cancelled many public celebrations and other events marking Lunar New Year, which falls on Saturday.

Chinese officials have not said how long the shutdowns of the cities will last.

There is up to a 70 per cent chance of a patient carrying the deadly coronavirus that originated in China arriving in Europe, according to calculations released on Friday by French researchers.

The National Institute of Health and Medical Research (Inserm) analysed flight paths between Europe and China, where hundreds of people have contracted the previously unseen virus.

Pakistan has also started screening passengers at its four airports in the wake of the coronavirus outbreak in China.

The Pakistan International Airlines (PIA) has decided to screen its passengers at the Beijing airport.

“In view of the current outbreak of coronavirus in China, Pakistan’s Civil Aviation Authority (CAA) has introduced new screening measures to prevent the virus from entering the country through air travellers,” according to a statement of the CAA.

Hospitals in Wuhan grappled with a flood of patients and a lack of supplies. Videos circulating online showed throngs of frantic people in masks lined up for examinations, and some complained that family members had been turned away at hospitals that were at capacity.

Authorities in Wuhan and elsewhere put out calls for medicine, disinfection equipment, masks, goggles, gowns and other protective gear.

Wuhan authorities said they are rapidly constructing a new hospital to deal with the crisis, to be completed Feb.3. It will be modeled on a SARS hospital that was built in Beijing in just six days during the SARS outbreak. The seriousness of the crisis was still an open question.

It was not clear just how lethal the virus is, or even whether it is as dangerous as ordinary flu, which kills tens of thousands of people every year in the US alone. Scientists say it is also not clear if it spreads as easily as SARS, its genetic cousin, which also originated in China and killed about 800 people in 2002-03.

The rapid increase in reported deaths and illnesses does not necessarily mean the crisis is getting worse. It could instead reflect better monitoring and reporting of the newly discovered virus, whose symptoms can initially resemble those of the cold and flu, including cough, fever and shortness of breath, but can worsen to pneumonia.

“It’s still too early to draw conclusions about how severe the virus is because at the beginning of any outbreak you would focus more on the severe cases,” said Tarik Jasarevic, a spokesman for the World Health Organisation in Geneva. “And then maybe we are missing some mild cases because people will just be a little bit sick and will not have it tested. And they will recover.”

With authorities afraid that public gatherings will hasten the spread of the virus, temples locked their doors, Beijing’s Forbidden City, Shanghai Disneyland and other major tourist destinations closed, and people canceled restaurant reservations ahead of Lunar New Year, normally a time of family reunions, sightseeing trips, fireworks displays and other festivities in the country of 1.4 billion people.