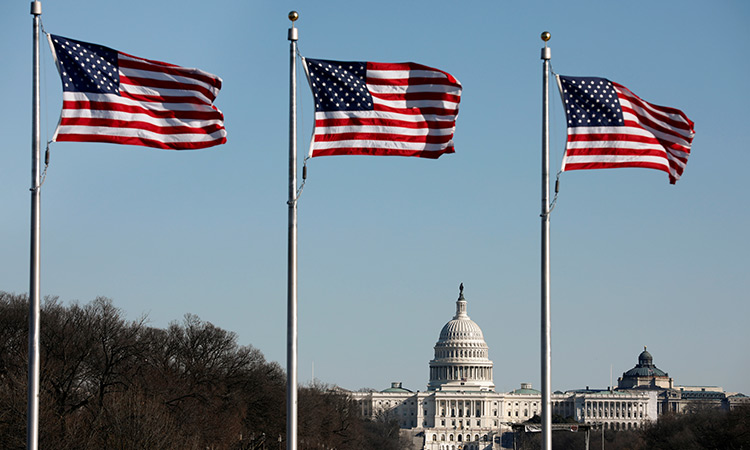 US Capitol is seen in Washington, a day before the Senate impeachment trial begins. Yuri Gripas/Reuters

President Donald Trump's lawyers submitted a trial brief Monday calling his impeachment by the House "a dangerous perversion" of the US constitution and demanding his immediate acquittal by the Senate. 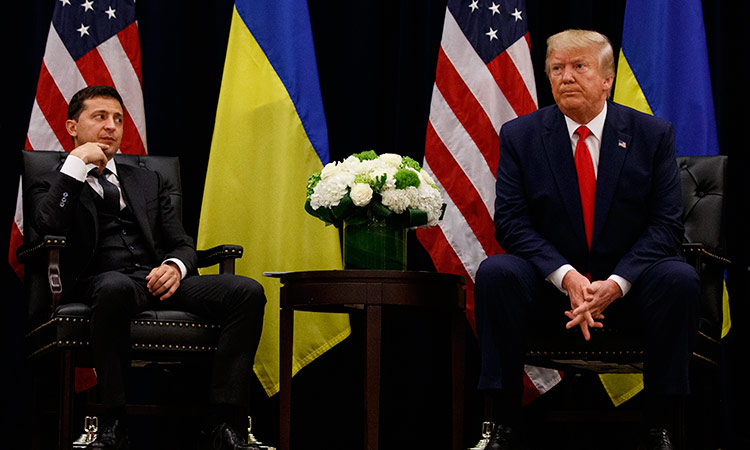 The dueling briefs provided the most extensive look yet at the arguments taken by the opposing sides, as they seek to win over not just senators but the US public.

The historic impeachment trial is set to open in earnest at 1 pm (1800 GMT) Tuesday, first with debate on what rules will govern the trial, overseen by the chief justice of the US Supreme Court, John Roberts.

The two briefs came on what normally would be a quiet federal holiday, Martin Luther King Jr. Day.

But the weeks to come will be anything but normal, as the Senate opens only the third presidential impeachment trial in US history.

In the president's brief, his 12-man legal team contested the very idea of his impeachment. 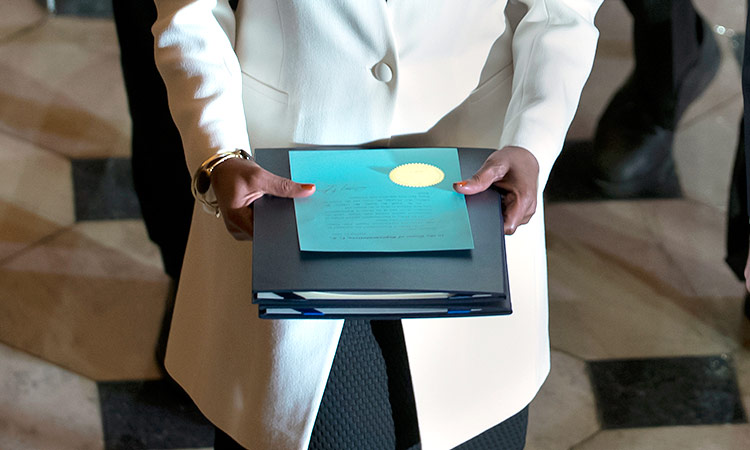 Clerk of the House Cheryl Johnson carries the articles of impeachment against President. File phto/AP

They called the two articles of impeachment -- approved largely along party lines in the Democratic-controlled House -- the product of "a rigged process" and "constitutionally deficient on their face" because they involved no violation of established law.

The brief said the theories underpinning them "would do lasting damage to the separation of powers under the Constitution."

One source working with the president's legal team told AFP the impeachment process was "illegitimate from the start," adding, "The president did nothing wrong."

The 171-page brief maintained that the impeachment articles are "the product of an unprecedented and unconstitutional process that denied the president every basic right." 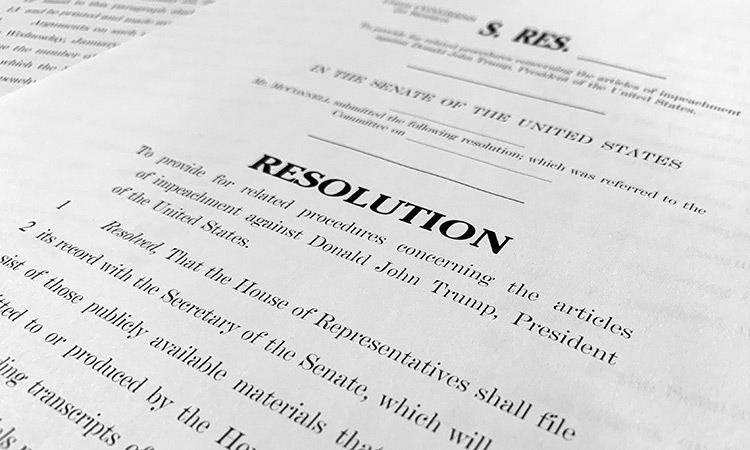 A copy of a Senate draft resolution to be offered by Senate Majority Leader Mitch McConnell, regarding the procedures during the impeachment trial of President Donald Trump in the US Senate is photographed in Washington, on Monday. AP

"All of this is a dangerous perversion of the Constitution that the Senate should swiftly and roundly condemn," the brief said.

The brief from the House managers, all Democrats, accused Trump of using "presidential powers to pressure a vulnerable foreign partner to interfere in our elections for his own benefit."

It added, "In doing so, he jeopardized our national security and our democratic self-governance."

"He then used his presidential powers to orchestrate a cover-up unprecedented in the history of our republic."

The two articles of impeachment charge Trump with abuse of power by pressuring Ukraine to provide dirt on Democratic presidential candidate Joe Biden and his son, and of obstructing Congress by refusing to allow top aides to testify.

The Trump team asserted that the president had both valid reasons and the constitutional authority to demand that Ukraine crack down on corruption, as he insists he did in a phone call with that country's president. 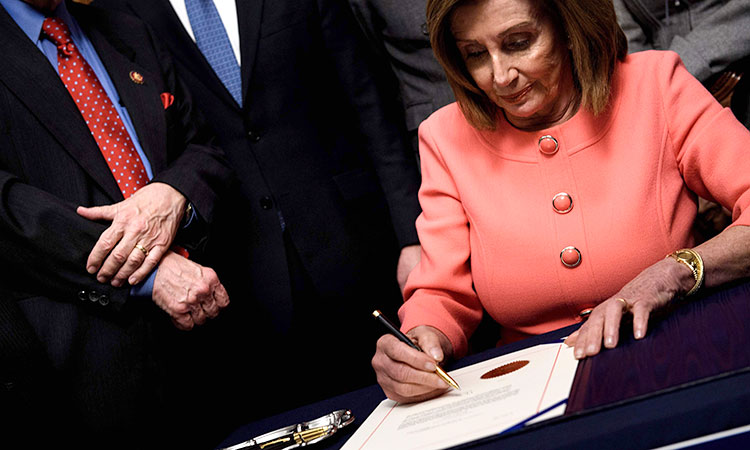 Speaker of the House Nancy Pelosi signs the articles of impeachment of US President in Washington. File photo/AFP

To the assertion by Trump's lawyers that the Senate could not remove him even if all charges in the articles are proved, the House briefers replied, "That is a chilling assertion. It is also dead wrong."

Trump turned to Twitter on Saturday to blast the process, saying, "What a disgrace this impeachment Scam is for our great Country!"

He will be abroad as his trial opens; Trump left late Monday for the economic forum in Davos, Switzerland, without commenting to reporters on the South Lawn.

Key issues surrounding the trial -- foremost, whether witnesses can be called and new evidence submitted along with the extensive record compiled during weeks-long House hearings -- remain to be determined.

Senate Majority Leader Mitch McConnell late Monday proposed rules calling for each side to have 24 hours over two days to present their arguments. That makes for long trial days and a significantly quicker pace than in Bill Clinton's impeachment trial in 1999. The chamber will debate and vote on the proposed rules Tuesday. 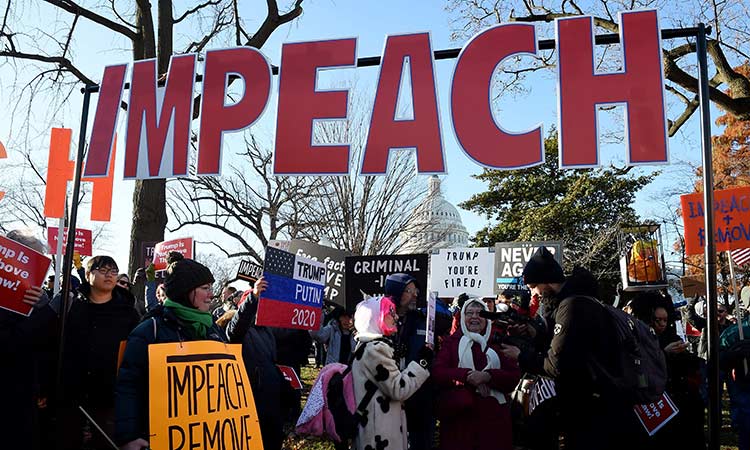 In this photo shows people rally in support of the impeachment of Donald Trump in Washington, DC. File photo/AFP

Senate Democratic leader Chuck Schumer said McConnell is rushing the trial and also making it harder for witnesses and documents to be presented.

"On something as important as impeachment, Senator McConnell's resolution is nothing short of a national disgrace," Schumer said in a statement.

Trump has called on the Senate, where his Republicans hold 53 of the 100 seats, to quickly dismiss the charges. Republicans can in fact present a motion to outright dismiss the case. This would require a simple majority of 51 votes.

The question of additional witnesses is contentious. Democrats say they need to hear from key officials -- including former national security advisor John Bolton -- with close knowledge of the president's dealings. Trump blocked their testimony during the House hearings.

Many Republicans say House Democrats had their opportunity and must now be content with the record to date.

The question is expected to be decided by a vote of senators, probably after both sides' advocates have laid out their full cases.

It would take only four Republicans to join all Democrats to approve the calling of witnesses.

But to remove Trump from office would require the votes of 67 senators, seen as a near-impossibility.

Even if the trial moves quickly, Republicans fear it might overlap with Trump's State of the Union address on February 4.