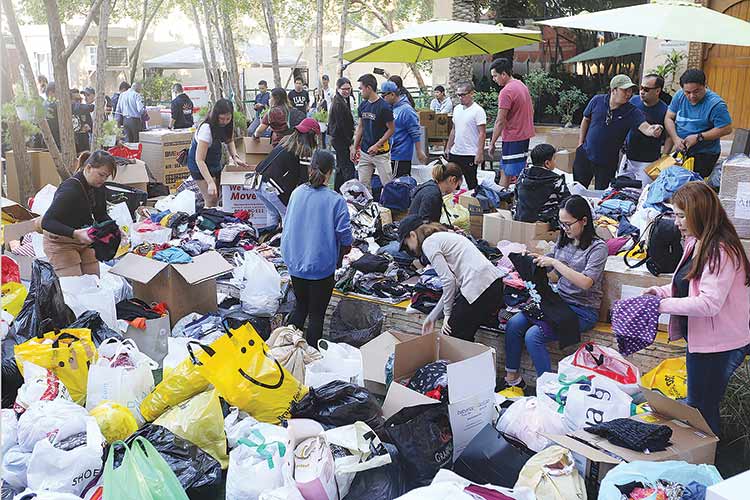 As of 6 p.m. (Philippine time/2 p.m. in the UAE) on Saturday, the bulletin of Manila’s Department of Science and Technology-Philippine Institute of Volcanology and Seismology (DoST-Phivolcs) stated: “Alert Level 4 still remains in effect over Taal Volcano. This means that hazardous explosive eruption is possible within hours to days.” Monitored were 366 volcanic earthquakes, three tremor events, and eight low-frequency earthquakes At 7 a.m. on Saturday, groups of friends and families not only from Dubai but also from Ajman, Umm Al Quwain and Al Ain were already outside POLODXB awaiting the start of the 8 a.m. to 12 noon collection drive.

They agreed that all 30 and 50-kilogramme (kg) cargo boxes—especially the first 600 kgs contain all the necessary items namely food, facemasks, hygiene and paper products, blankets and mats aside from clothes.

They too agreed that all cargo boxes be addressed to the people on the ground who have direct access and contact to the evacuees or the “good samaritans who have homed the evacuees” because they do not want a repeat of the Nov. 2013 Super Typhoon Haiyan unfortunate and heartbreaking aftermath wherein billions of dollars of donations from across the world were wasted and left to rot in “discovered” storehouses and rooms due to the viciousness of some individuals.

At 10 a.m., the first set of the free airfreight 600-kgs cargo boxes courtesy of 15 of 18 members of the PBCDNE-LFF had been dispatched. Japor, as early as Jan. 15 was already communicating with Municipal Disaster Risk Reduction Management Council head Virgieluz Gonzales, in-charge of the evacuees in San Pascual Town, Batangas.

Gonzales is an aunt of Japor’s colleague and in a WhatsApp shown to Gulf Today, one of the 25 evacuation centres in San Pascual houses 18 families. One family consisted of eight children.

Other identified recipients are evacuees either in evacuation centres or homed in Batangas City and in the Batangas towns of San Luis, Sto. Tomas and Balayan which remain to be outside the danger zone currently at 14 kms away from Taal Volcano, based on the monitoring system of DoST-Phivolcs.

Another set of recipients are the evacuees housed at the Inusluban Maraway School in Lipa City, Batangas as per Dubai-based volunteer Cynthia Africa-Cueto.

Others are the evacuees from the towns of Laurel, Talisay, Agoncillo and Lemery (Batangas Province) which have been succored by the municipal officials and town folk of Mendez Town in Cavite Province (northwest of Batangas) which had also been declared in a “state of calamity” as of Jan. 15 by its provincial and local government officials.

Volunteer and Dubai resident Emil Parcia said her contact in her hometown of Mendez are Department of Social Welfare and Development officer Edith Perey and People with Disability-Mendez Chapter president Renel Dinglasan and officer Marivic Saavedra.

Parcia was still at the POLODXB as of 4:30 p.m. She said donations kept on coming.

Japor as of Saturday also had received messages for aid from residents of Lucena City in Quezon Province (east of Batangas) who have also been helping evacuees.