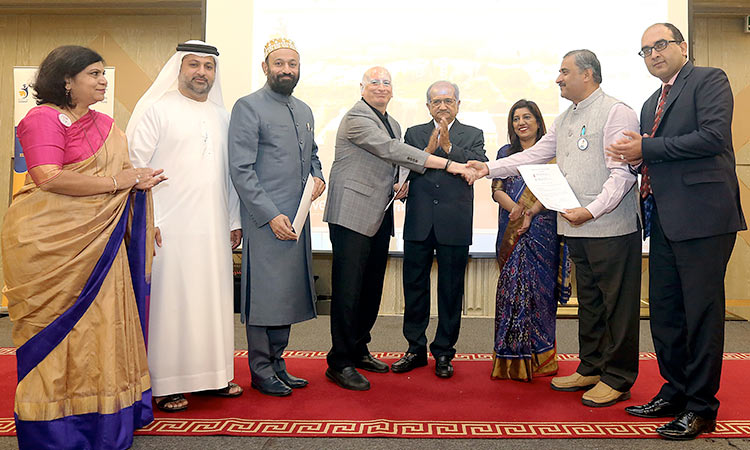 Bhupendrasinh Chudasama, Vipul, Anju Sharma and others during the roadshow in Dubai on Friday. Kamal Kassim / Gulf Today

Students who are planning to pursue higher education in India got an excellent opportunity to explore various options as 22 leading universities and four institutes based in Gujarat, India, showcased their facilities in Dubai on Friday. The show was held as part of a two-day roadshow organised by the Ministry of Education, Government of Gujarat, with support of Consulate General of India in Dubai.

The participating institutions provided information about the courses and curriculum as educators, principals, teachers, parents and representatives from several schools and universities in Dubai visited in large numbers. More than 700 students from various Indian schools of Dubai and Northern Emirates attended the exhibition.

In his inaugural address, Consul General of India in Dubai Vipul said, “It is for the first time that so many principals and teachers of Indian schools in Dubai have turned up for such an event. This event will provide a fruitful opportunity to students in the UAE and inspire them to study at various world class institutes of Gujarat.” Anju Sharma, Principal Secretary for Higher and Technical Education, Govt. of Gujarat, highlighted that the state boasts of world-class infrastructure, premier higher education institutes, well established industries sector, good connectivity and unique heritage and culture. The Government of Gujarat is encouraging innovative ideas and start-ups through policies like “Student Startup and Innovation Policy”. During the past 15 years, the number of universities in the state has grown from less than 10 to more than 75.

The state caters to over 800,000 students in the higher education institutions out of which around 10,000 are from foreign countries. The state has set up universities in niche areas like forensic sciences and teacher education, which are getting good response.