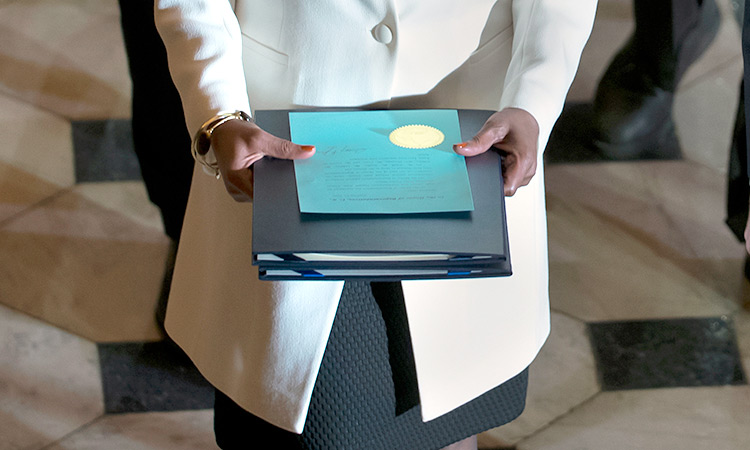 Clerk of the House carries the articles of impeachment against Donald Trump to the Senate in Washington. AP

Two articles of impeachment against Donald Trump were delivered from the US House to the Senate on Wednesday, setting in motion the trial of the 45th US president.

Why the delay in the impeachment Senate trial 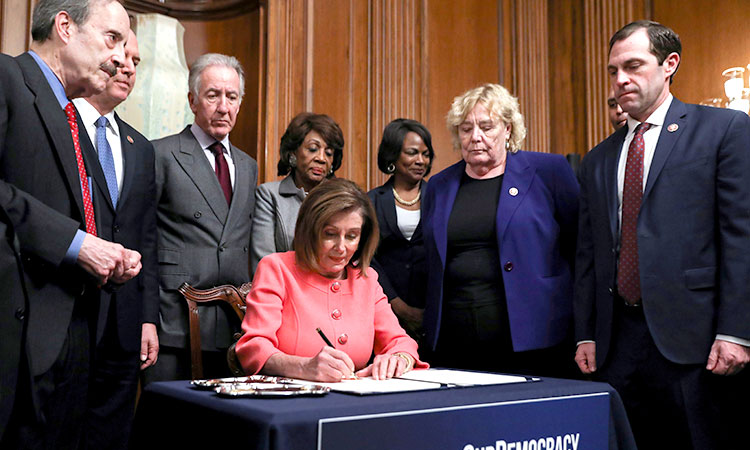 "So sad, so tragic for our country, that the actions taken by the president to undermine our national security, to violate his oath of office and to jeopardize the security of our elections, has taken us to this place," said Pelosi, before using several ceremonial pens to sign the articles.

Held in blue folders, the articles were delivered to a Senate clerk by officials including the House managers chosen to prosecute the case against Trump, after a message notifying the Senate of the impeachment charges was read aloud on the floor of the chamber.

Later that day at 2:00 pm, US Supreme Court Justice John Roberts will arrive to be sworn in.

"Then the chief justice will swear in all of us senators," a somber McConnell said on the floor.

The Senate will be converted into a court of impeachment for only the third time in US history.

US President Donald Trump gestures at an event in Washington. File photo

"The trial will commence in earnest on Tuesday," McConnell said.

"We'll pledge to rise above the petty factionalism and do justice for our institutions, for our states and for the nation," he said.

"I'm confident that this body can rise above short-termism and factional fever and serve the long-term best interests of our nation. We can do this, and we must."

McConnell said the White House would be notified of Trump's pending trial, and that the Senate will "summon the president to answer the articles and send his counsel."

Trump is accused of secretly holding up aid to Ukraine between July and September to pressure Kiev to investigate former vice president Joe Biden, the Democratic frontrunner in this year's White House race.

He was formally impeached on December 18 when the Democratic-controlled House charged him with abusing his power by illicitly seeking help from Ukraine for his reelection. 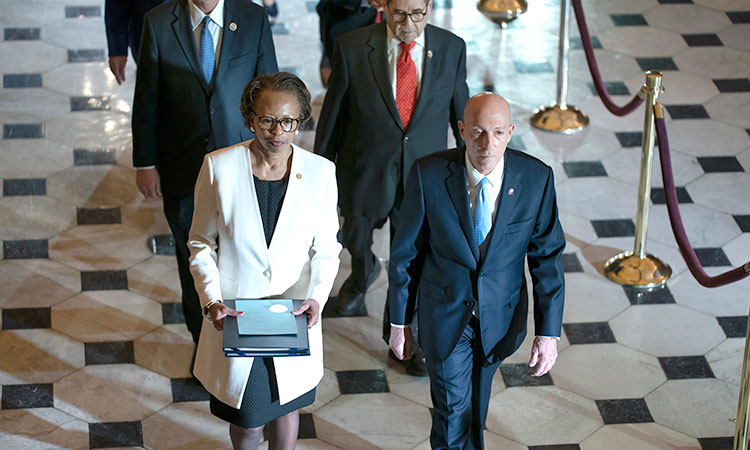 Clerk of the House Cheryl Johnson (left) passes through Statuary Hall at the Capitol to deliver the articles of impeachment against President Donald Trump to the Senate, on Capitol Hill in Washington. J. Scott Applewhite/AP

The president is also charged with obstruction for holding back witnesses and documents from the House impeachment investigation in defiance of Congressional subpoenas.

Wednesday's ceremonial procedures mark the end of a weeks-long standoff between House Democrats and the Senate's Republican leadership over whether to call witnesses in the trial.

Pelosi has demanded witnesses testify, including key Trump administration officials with firsthand knowledge of the president's efforts to pressure Ukraine which formed the basis of his impeachment.

Republicans say they will only consider witnesses once the initial trial rules are approved and the trial, expected to last two weeks, is underway.

Trump's conviction in the Senate is highly unlikely as the president's Republican Party has a 53-47 majority. A two-thirds super-majority of senators is required to find him guilty and remove him from office. 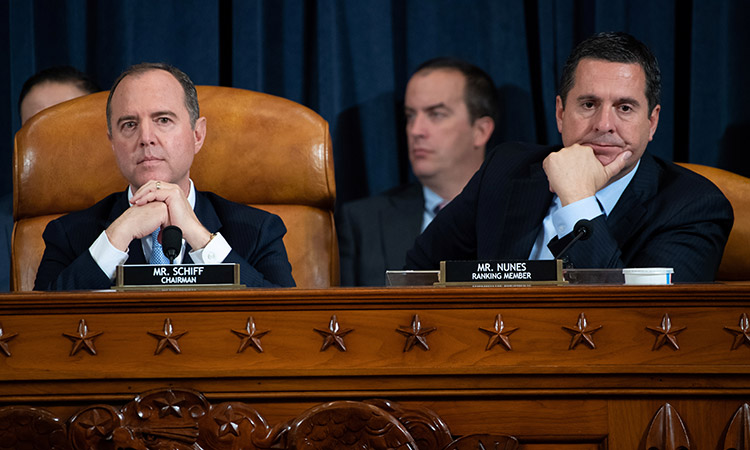