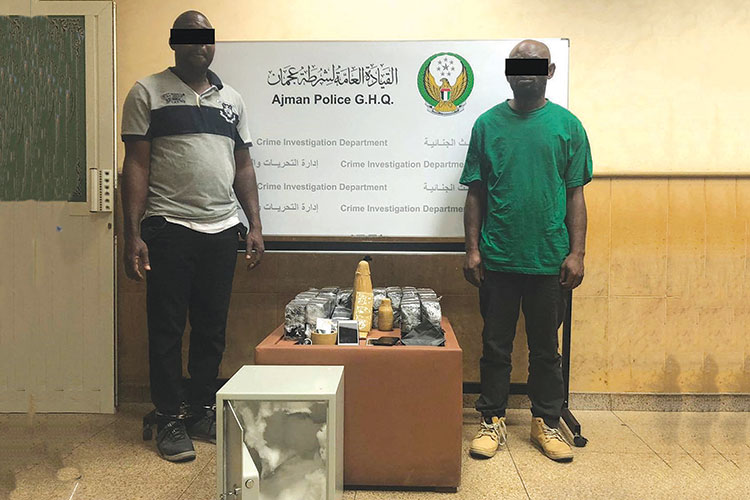 An investigation team was formed and tasked the victim to agree with the duo to give them Dhs100,000 to convert to $100,000.

The General Command of Ajman Police arrested two African suspects on charges of fraud. They claimed the ability to double the money.

Lieutenant Colonel Ahmed Saeed Al Nuaimi, Director of the CID said they received a report from a person stating he had been defrauded by two Africans, who deluded him by claiming the ability to double the money.

The victim added the suspects showed him a black paper on which they sprayed a liquid and washed it, turning it into a $100 note.

Then they offered him a large amount of these papers in exchange for Dhs15,000, to buy the liquid material.

They told him not to open the packages in the pretext that it took time to turn into real banknotes.

Immediately, an investigation team was formed, and tasked the victim to agree with the duo to give them Dhs100,000 to convert to $100,000.

They were arrested red handed while receiving the money. On being questioned, they admitted to the crime, and were referred to the Public Prosecution.

In a seperate event, the Dubai Criminal Court on Wednesday looked into the case of a 33-year-old GCC national charged with counterfeiting the birth certificates of his three daughters and obtaining passports for them, after attributing them to his ex wife, not their real mother. The suspect allegedly said he did that to escape the costs of childbirth, and fearing his dismissal from his military job.

Details of the case date back to before 2011, when the suspect married for the second time, without obtaining approval from his work place, for fear of termination of his service, and he had three daughters.

He reportedly concealed his marriage and used the health insurance card and identification documents of his ex wife to admit the second wife to hospital for birth and got the birth data for his daughters. He then submitted the data to the Preventive Medicine Department in the Emirate of Dubai, to extract birth certificates in which he proved that his ex wife was the mother of the three girls, and then extracted their passports.

The victim witnessed that in 2018 she found the family book copy of the three girls in which she was mentioned to be their mother. She then faced the suspect, who told her they were his second wife’s, promising her to correct the data but he did not.

Details of the case date back to January and May 2017, when the suspect embezzled 43 cheques worth Dhs1,300,000, the value of settlement of insurance contracts of the victims.

The company found out that 180 receipts were forged during a span of 4 years, which enabled the defendants to embezzle Dhs818,000 without getting caught.