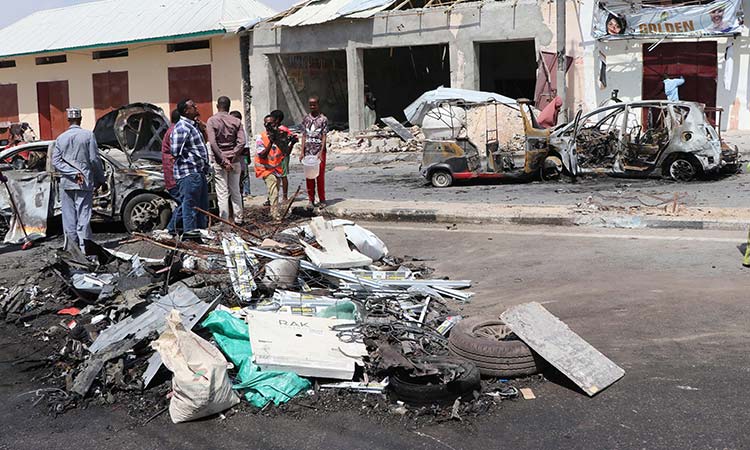 People collect debris at the site where a car bomb exploded near the Somali parliament in Mogadishu. AFP

At least four people were killed and 10 wounded when a car bomb exploded close to a checkpoint near Somalia's parliament in the capital Mogadishu on Wednesday, police said.

US base EU convoy attacked in Somalia

A plume of thick black smoke was seen over the city and witnesses said a number of vehicles were on fire.

Militant group Al Shabaab claimed the attack, after a spike in activity in recent days by the Al Qaeda linked group which has seen it inflict mass casualties in Somalia and attack a US military base in Kenya. 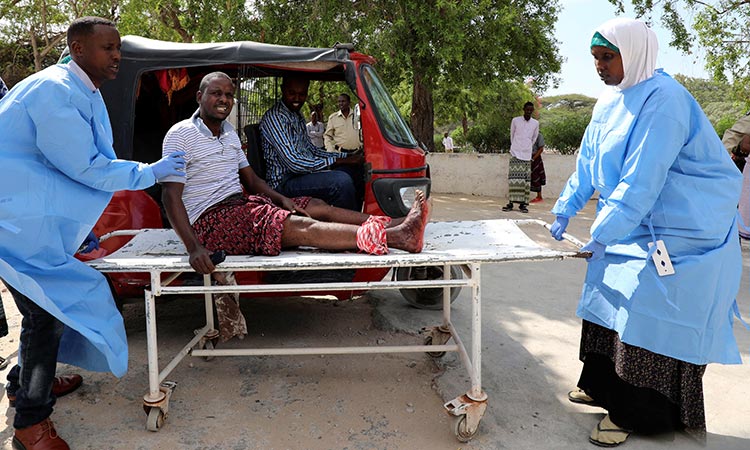 Paramedics at the Madina hospital assist a man who was injured during a bomb explosion in Mogadishu. Reuters

"Explosives were packed in a vehicle which the security forces think was trying to pass through the checkpoint but because he could not do that, the suicide bomber detonated it," said police officer Adan Abdullahi.

"Initial reports we have received indicate four people were killed and more than 10 others were wounded in the blast."

Abdirahman Mohamed, who was at a nearby grocery store when the blast occurred, said he saw several dead bodies.

"I saw the dead bodies of several people some of them killed by shrapnel inside their vehicles. There was chaos... and ambulances reached the scene soon after the blast," he said.

Shamso Ali, another witness, described "smoke and chaos along the road, the blast was very heavy".

"Thanks to God I was a distance away but I saw the smoke and several vehicles caught on fire," he said.

Mogadishu is regularly hit by attacks by Al-Shabaab, which has fought for more than a decade to topple the Somali government. 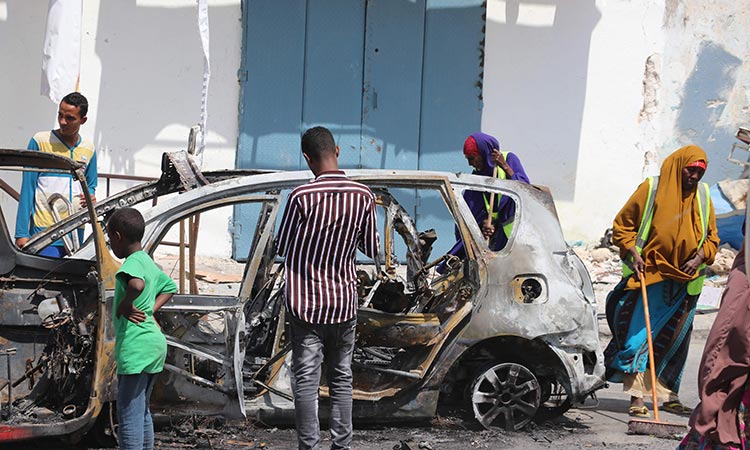 People start cleaning debris at the site where a car bomb exploded near the Somali parliament in Mogadishu, Somalia. AFP

The powerful blast comes after Al-Shabaab claimed a massive car bombing in Mogadishu on December 28 that killed 81 people.

The attack hit a busy checkpoint in the southwest of the city, leaving vehicles charred and twisted at a crossroads in the deadliest assault in two years in the Horn of Africa country. Scores more were wounded.

Al-Shabaab has also managed to expand its network in the region, especially in Kenya which has suffered several devastating attacks in retaliation for it sending troops into Somalia in 2011.

On Sunday, three US citizens died and several aircraft and military vehicles were destroyed when Al Shabaab stormed a military base in Kenya's coastal Lamu region.