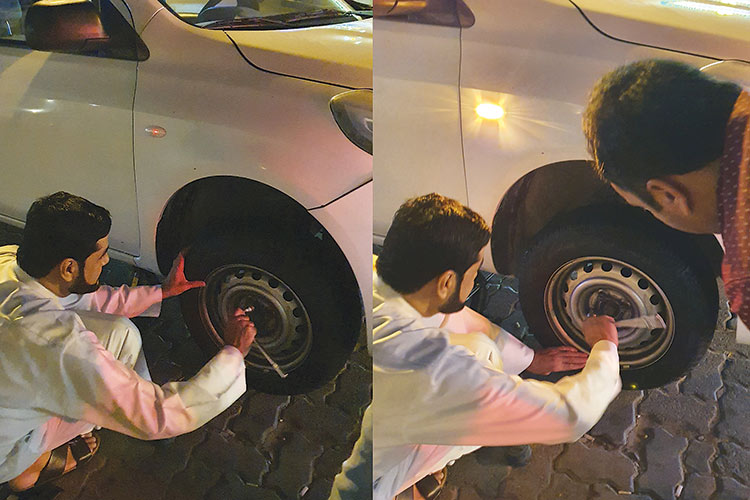 Rashid Al Leem helps change the tyre of a Kashmiri expat at night.

When Kashmiri expat Qasim Butt and his family stood clueless on the road after his pickup sustained a flat tyre, little did he know he was in for a surprising kindness from a man he thought he would be too inferior to seek help from.

Stranded on the road with a family at night and nobody else around, Butt was only beginning to panic when Dr Rashid AlLeem walked towards him, offering to help. Until Dr Rashid’s friend broke the surprise after all was done, the Kashmiri guy was not aware that it was the Chairman of Sharjah Electricity and Water Authority who was helping him change the tyre.

And for Dr Rashid, it started with a leisurely outing with a friend for a cup of coffee, and it ended with a great act of kindness. He warmed the heart of his friend when he slipped out of his vehicle while his friend ordered coffee at a cafe near a roundabout on the Ajman-Sharjah Road, just as they entered Sharjah. His friend said that he was shocked to see Dr Rashid help the Kashmiri like a commoner on the road.

“As I looked for him after ordering coffee, he was not there in the car. Then I saw him jacking up the vehicle and helping the Kashmiri change the tyre. I was awe-struck by this act,” said his friend.

“After all was done, I asked Qasim if he knew the man who was changing the tyre? He said ‘No.’ Then I revealed that it was the Chairman of Sharjah Electricity and Water Authority,” the friend added.

This realisation left Qasim speechless. He said he could not believe his eyes. “Nobody stopped for helping us. The man is an angel sent by God to help me in such a situation,” he said.

They say a true leader has the compassion to feel the needs of others and has the humility and the courage to make things easy for them. Dr Rashid AlLeem, through this kind act, certainly has proven to be a role model as a leader, someone the youth and the adults can look upto.