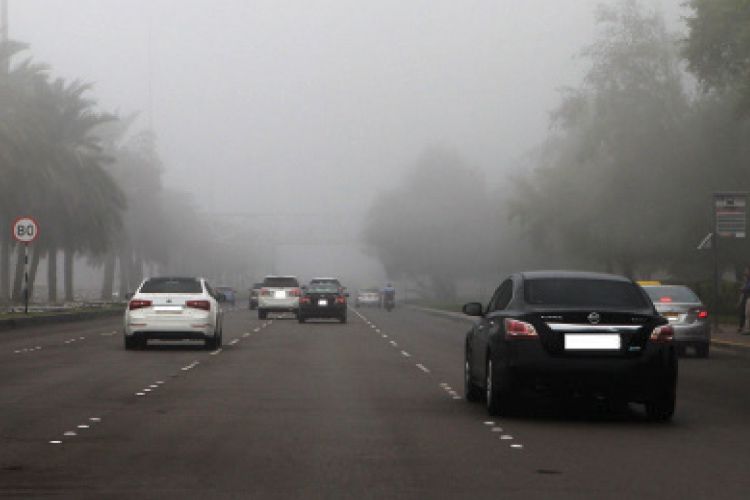 Cars move at a slow pace during heavy fog on Sunday morning.

The National Centre of Meteorology (NCM) warned of the poor horizontal visibility caused by strong winds stirring up dust, appealing to the motorists whether driving on external or internal roads leading to those areas to exercise caution and adhere to the traffic instructions.

The lowest temperature recorded over the country on Sunday morning was 8.8 °C in Jais Mountain at 06:15am.

The NCM said that the country is currently under the effect of the Red Sea depression accompanied by a surface depression extending from west to east leading to increase of clouds formation over some northern, eastern and inland parts in the country.

Moderate to fresh southwesterly to northwesterly winds, causing blowing dust and sand over the exposed areas, with a speed of 25–40, reaching 50km/hr. Sea will be moderate, becoming rough by afternoon in the Arabian Gulf and slight to moderate in the Sea of Oman.

It will be also cloudy to partly cloudy in general on Monday, with a chance of rainfall especially over the northern and eastern areas during daytime, with a significant drop in temperatures, the NCM added.

Moderate to fresh northwesterly to southwesterly winds, and strong at times especially over the sea, causing blowing dust and sand, with a speed of 25–40, reaching 55km/hr over the sea. Sea will be rough to very rough at times in the Arabian Gulf and rough in the Sea of Oman.

The NCM also warned of the fog and the poor horizontal visibility caused by it, appealing to the motorists whether driving on external or internal roads leading to those areas to exercise caution and adhere to the traffic instructions.