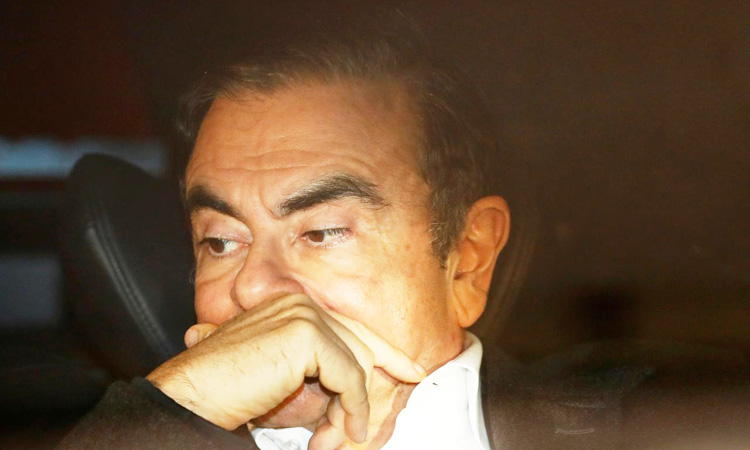 In this file photograph shows Ghosn looks down.

Nissan's former Chairman Carlos Ghosn said on Tuesday from Lebanon he was not fleeing justice but instead left Japan to avoid "injustice and political persecution” over financial misconduct allegations during his tenure leading the automaker.

Ghosn had been released on bail by a Tokyo court while awaiting trial but was not allowed to travel overseas. He disclosed his location in a statement through his representatives that did not describe how he left Japan, where he had been under surveillance. He promised to talk to reporters next week.

"I am now in Lebanon and will no longer be held hostage by a rigged Japanese justice system where guilt is presumed, discrimination is rampant, and basic human rights are denied, in flagrant disregard of Japan's legal obligations under international law and treaties it is bound to uphold,” the statement said.

Japanese media quoted prosecutors speaking anonymously who said they did not know how Ghosn had left.

How could one of the most high-profile and instantly recognisable tycoons on Earth escape Japan just months before his trial, when his bail conditions strictly forbade him from leaving the country?

That's the question being asked in Japan, where Carlos Ghosn's abrupt departure and arrival in Lebanon is being seen as an embarrassing lapse in security.

The 65-year-old, who holds Brazilian, French and Lebanese passports, had all three confiscated as part of his bail conditions as he prepared to defend himself against multiple charges of financial misconduct.

One of his lawyers, Junichiro Hironaka, confirmed to reporters that they still had them in their possession, confessing he was "dumbfounded" at the news of his client's flight -- which heard about via the media.

Public broadcaster NHK cited an anonymous source as saying the Immigration Services Agency had no record of a Carlos Ghosn leaving the country, and authorities were reviewing whether he left using another name.

NHK also quoted a foreign ministry official as insisting: "He was not supposed to leave the country. Had we known about it beforehand, we would have reported that to proper law enforcement authorities."

"If this development is true, it would be a matter between the legal authorities of the two countries," the official added.

The UAE Ministry of Health and Prevention (MoHAP) on Saturday reported 1,078 cases of the Covid-19 coronavirus, along with 857 recoveries. Two deaths were also reported.

The brief period of isolation, Will Bradley says, he can live with. But the thought he cannot see his family back home in Worcester, possibly until Christmas, is harder.