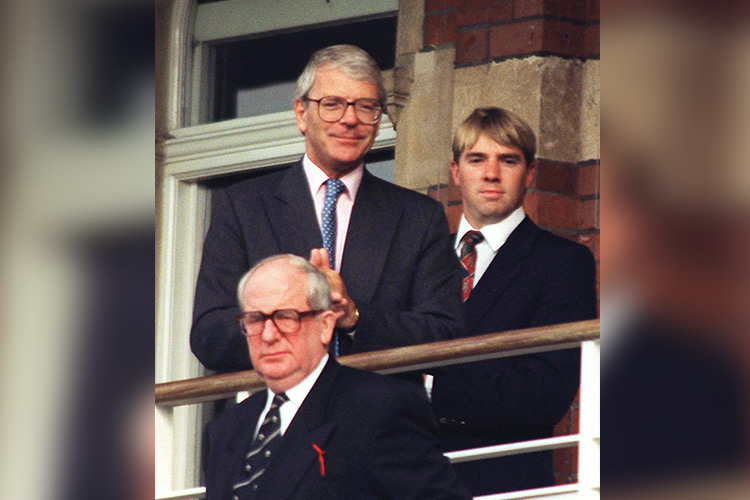 John Major watches play at the Oval as Pakistan played England in the third and final test between the two sides on Aug.25, 1996 . File / AP

Major weighed up the pros and cons of going to the Games, with his advisors pushing him to attend, insisting he had "street cred" in sport and it would make for great pictures of him in "relaxed, jacket-off mode."

But the cricket-loving premier stuck to his guns and missed seeing Britain's only gold medal − to watch England lose to Pakistan instead in the first Test at Lord's.

The files were released after 23 years in the vaults at the National Archives.

Major seemed keen on Atlanta when the idea was raised in February 1996 and flight plans were drawn up.

In a memo to Major on June 7, his private secretary Rachael Reynolds said she understood he was thinking of going to Lord's rather than Atlanta and "it would be a pity" if he missed the Olympics.

The adviser told him US president Bill Clinton, South African president Nelson Mandela and French president Jacques Chirac were all going, and "even the King of Finland is turning up!"

The draft programme would have seen him witness oarsmen Steve Redgrave and Matthew Pinsent win Britain's only gold medal of the Games.

In a further memo to Major on June 19, Reynolds said decision time was fast approaching and spelled out the advantages and disadvantages.

"You will be very tired at the end of July," she wrote, of the negatives.

"It is a long flight and the weather will be hot in Atlanta.

"Second, you will miss the Lord's Test and you are unlikely to be able to pick up a satellite channel in America which carries cricket."

As for the advantages, she said it would likely be his last chance to attend an Olympics as prime minister, and there might be "snide remarks" if he did not show up to support the British team.

"Some of the best pictures we see of you are in relaxed, jacket-off mode and there would be plenty of opportunity for that," Reynolds insisted.

"You cannot do too much of associating yourself with winners." She said Major was strongly linked with sport in a way "no other politician" was and "you should capitalise on this."

"I do think it is worth doing, if you can bear it. You have established your street cred in this area so well, it would be a pity to miss an opportunity which only comes up every four years."

In the end, Reynolds wrote to the British Olympic Association on June 28, telling them: "The prime minister has decided that his programme at the end of July is too heavily committed for him to be able to travel to Atlanta."