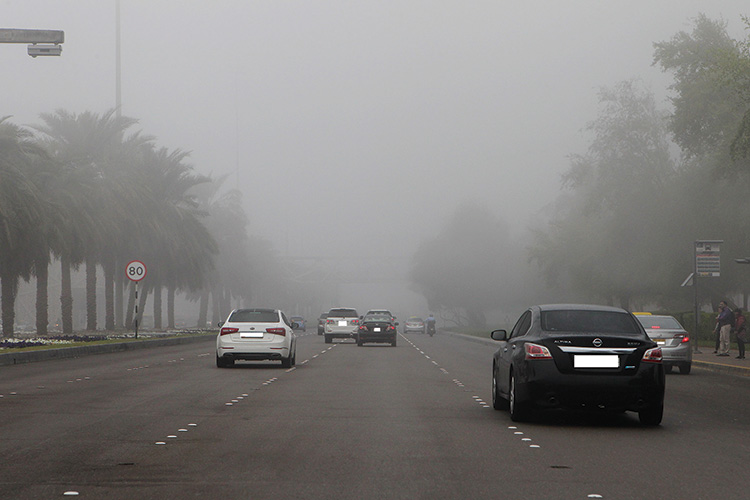 Fog prevails in several areas during the early hours of Monday.

Thick fog covered various parts of the country on Monday morning, dimming the horizontal visibility to a very low level in the inland and middle areas. It prevailed across Madinat Zayed in Al Dhafra Region, Sweihan, and Abu Dhabi-Al Ain Road.

The National Centre of Meteorology (NCM) warned of the fog and the poor horizontal visibility caused by it, appealing to the motorists whether driving on external or internal roads leading to those areas to exercise caution and adhere to the traffic instructions.

The NCM has said that the weather on Tuesday is expected to be fair to partly cloudy and the relative humidity will increase during the night and on Wednesday morning over most internal areas and some coastal areas with a chance of fog or mist formation. Light to moderate westerly to northwesterly winds, with a speed of 18–28, reaching 36km/hr. Sea will be slight to moderate in the Arabian Gulf and in the Sea of Oman.

The atmosphere could be fair to partly cloudy and the relative humidity may increase during the night and on Thursday morning over most internal areas and some coastal areas with a chance of fog or mist formation. Light to moderate southwesterly to northwesterly winds are also expected, with a speed of 18–28, reaching 36km/hr. Sea will be moderate, becoming rough westward by night in the Arabian Gulf and slight to moderate in the Sea of Oman, the NCM added.

In the same context, the Abu Dhabi Police on Monday morning activated a system to reduce speed during weather fluctuations, particularly poor visibility on roads caused by fog on (Abu Dhabi – Dubai road), (Abu Dhabi - Al Ain road) and (Al Ain – Dubai road) to 80 km / h for two hours from 8am to 10 am.

The police indicated such a system of reducing speed on roads during weather fluctuations to 80 km / h in the event of “fog, wind, dust and rain” and when the horizontal visibility is less than 200 metres. The step comes within their proactive plan to provide the best practices to ensure traffic safety during such circumstances.

The modified speed during fog formation is the regular speed on roads until horizontal visibility returns clear.