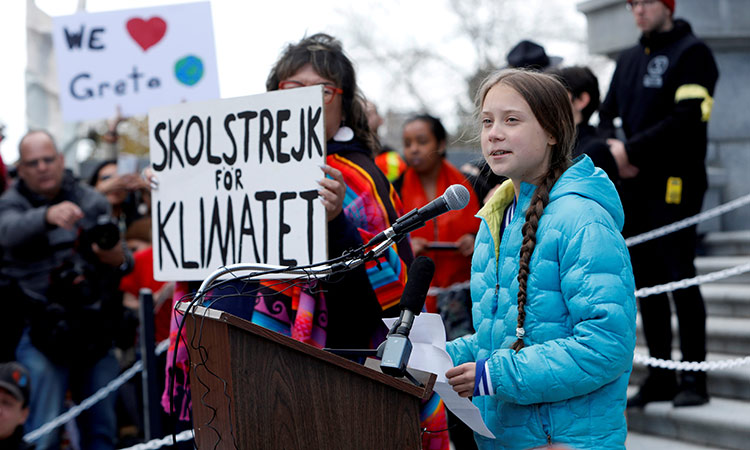 Svante Thunberg, father of eco-warrior Greta Thunberg, thinks his daughter is happier being an activist but admitted in an interview he at first had reservations about her taking up the struggle.

The 50-year-old actor-turned-producer told the BBC he and Greta's mother − opera singer Malena Ernman − originally objected to their daughter's decision to become a climate activist.

"Obviously we thought it was a bad idea, putting herself out there with all the hate on social media," he said.

Greta, described as a shy 16-year-old, has found herself in the role of spokesperson for a generation haunted by climate change after she started sitting outside the Swedish parliament in August 2018 with her "School Strike for the Climate" sign.

Instantly recognisable with long braids and impish looks, she has become the face of youth concerns over climate change, inspiring millions and being invited to address the United Nations climate summit.

Greta's family realised just how much the existential threat of climate change weighed on her when she became depressed at age 11.

She stopped eating, started missing school and even stopped talking.

Despite his initial apprehension Svante Thunberg − who has accompanied Greta on two sail trips over the Atlantic − also said he thought it was clear his daughter was much happier since taking up activism.

"She changed and she could do things that she could never have done before," he said.

Diagnosed with Asperger's syndrome, Greta used to be able to eat only in her own home and "didn't speak to a single person."

She is now "an ordinary child," her father added.

Greta has also faced severe criticism and been subjected to a swarm of online conspiracy theory.

Some have claimed she is a puppet of doomsayers, or paid by the "green lobby."

But her father said she was prepared for the "hate" she would receive even before she started her protest.

"She knew exactly what she was doing and I think quite frankly she's very surprised that she has been so well received," Svante Thunberg told the BBC.