Pope Francis ushers in Christmas with message of ‘unconditional love’ 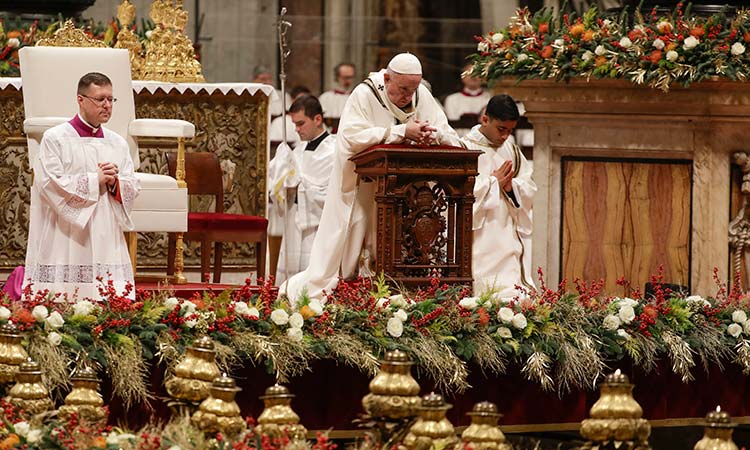 Pope Francis ushered in Christmas on Wednesday for the world's 1.3 billion Catholics with a message of unconditional love, saying "God continues to love us all, even the worst of us".

"You may have mistaken ideas, you may have made a complete mess of things, but the Lord continues to love you," the pontiff told crowds gathered at the Vatican for his Christmas Eve midnight mass.

The Argentinian also emphasized "unconditional" love, in a year that has seen the Pope move to combat silence surrounding paedophilia in the Roman Catholic church, which has been rocked by thousands of reports of sexual abuse by priests around the world and accusations of cover-ups by senior clergy. 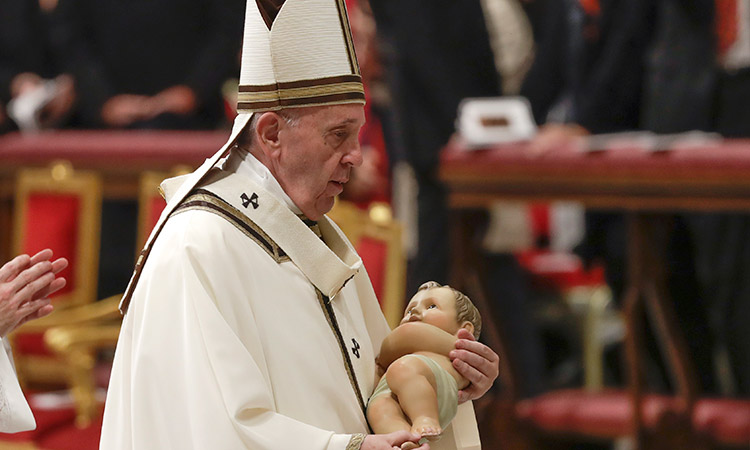 Earlier this month, he removed a Pontifical secrecy rule, which critics said prevented priests and victims from reporting abuse, and in May passed a landmark measure to oblige those who know about sex abuse to report it to their superiors.

Francis will at noon on Wednesday give the traditional Christmas Day mass -- his seventh -- addressed to the world in front of St Peter's Square.

Meanwhile, thousands of Palestinians and foreigners converged in the biblical town of Bethlehem, revered by Christians as the birthplace of Jesus, in the Israeli-occupied West Bank.

A few hundred worshippers gathered in the church on the site of Jesus's birth for midnight mass, attended by Palestinian president Mahmud Abbas. Hundreds more gathered outside, watching on screens in the crisp air.

But fewer Christians from the Gaza Strip were in attendance than in previous years, as Israel had granted permits to just around 300 of the some 900 people who applied, said Wadie Abunassar, an adviser to Church leaders in the Holy Land.

At midnight bells rang out throughout the town, Archbishop Pierbattista Pizzaballa, the most senior Roman Catholic official in the Middle East, led hymns and said prayers. 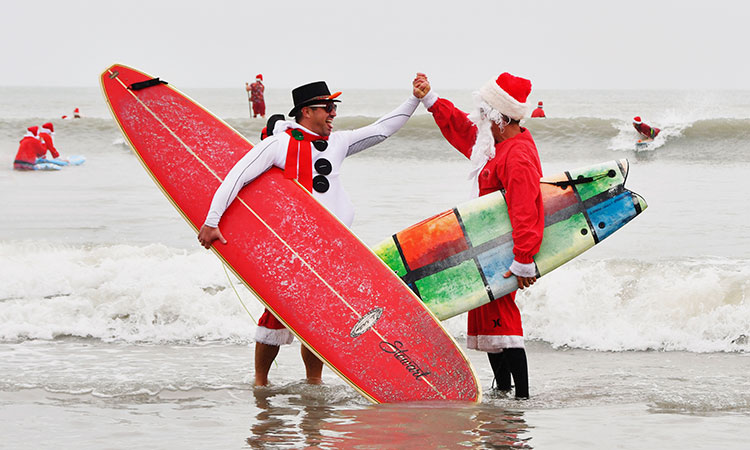 George Jr and George Trosset celebrate high five each other during the 10th annual Surfing Santas event in Florida. AP

"At Christmas all the world looks to us, to Bethlehem," he said.

"Special greetings to our brothers and sisters in Gaza, with whom I celebrated Christmas two days ago," he added.

Pizzaballa, who had to cross Israel's separation barrier to get from Jerusalem to Bethlehem, said after his arrival that it was a difficult time but there was reason for hope.

"We see in this period the weakness of politics, enormous economic problems, unemployment, problems in families," he said.

"On the other side, when I visit families, parishes, communities, I see a lot of commitment... for the future. Christmas is for us to celebrate the hope."

Earlier on Christmas Eve, a few thousand people watched in the winter sun as Palestinian scouts paraded in front of a giant Christmas tree.

"The church is beautiful and it puts what we know in the Bible (in) place," said Laneda, an American tourist visiting the site. "Everything is just very meaningful."

French Catholics endured a sad moment as Notre-Dame Cathedral in Paris was unable to hold Christmas Eve Mass for the first time since 1803 -- after a fire ravaged its structure in April.

In the Philippines, a majority Catholic country, typhoon Phanfone brought a wet and miserable Christmas Day to millions, many of them stranded at shuttered ports or evacuation centres. 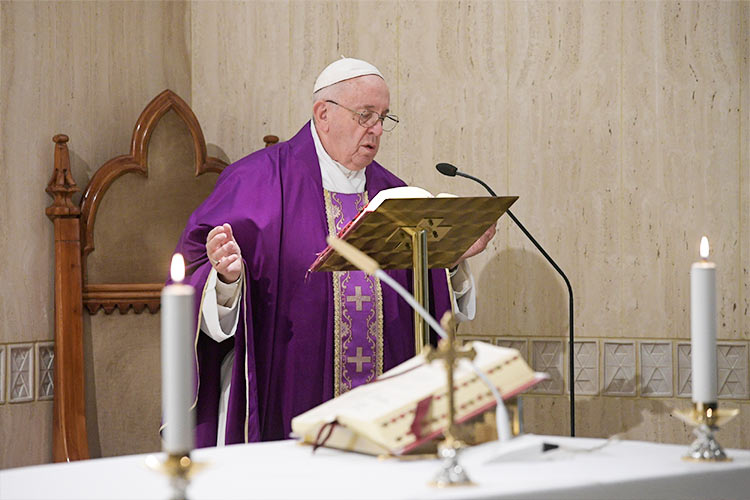 The Pope’s Christmas message is timely. The world is embroiled in strife, racial discrimination, religious disharmony etc, etc. Unless we embrace tolerance and peace, we can’t expect to leave 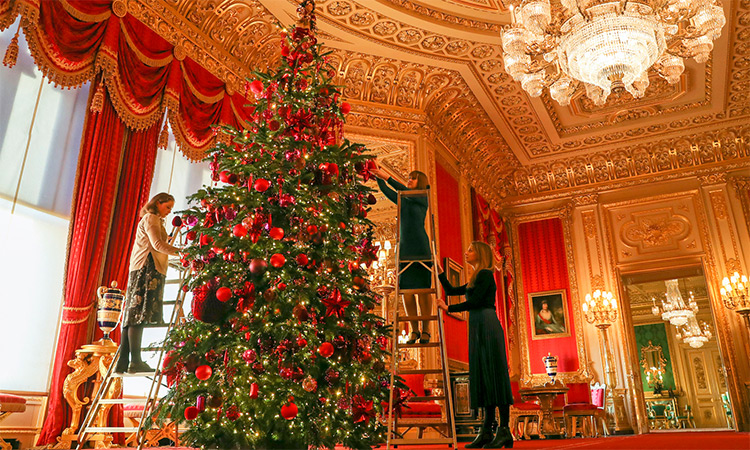 Christmas is more than a religious event

Although Christians are celebrating an important religious event, the majority of us in Britain are celebrating something more timeless. Every human being so far has been born and died on earth, 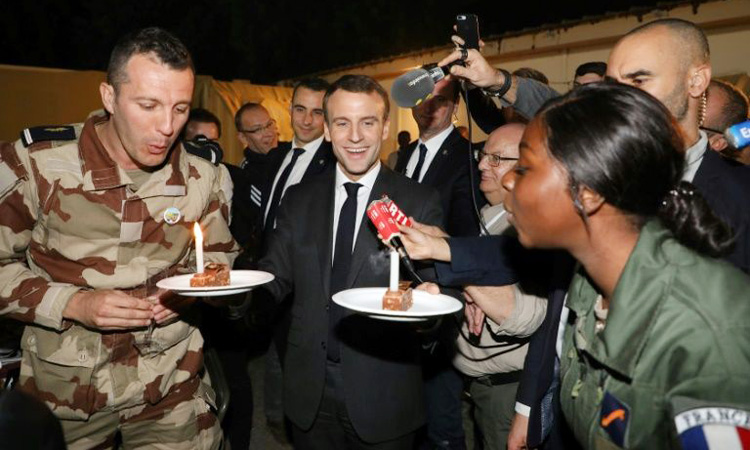 France’s Macron to mark Xmas with troops on Africa visit

In keeping with tradition, President Emmanuel Macron on Friday will celebrate Christmas with French soldiers posted abroad, travelling this year to Ivory Coast as Paris seeks to strengthen regional ties against militants. 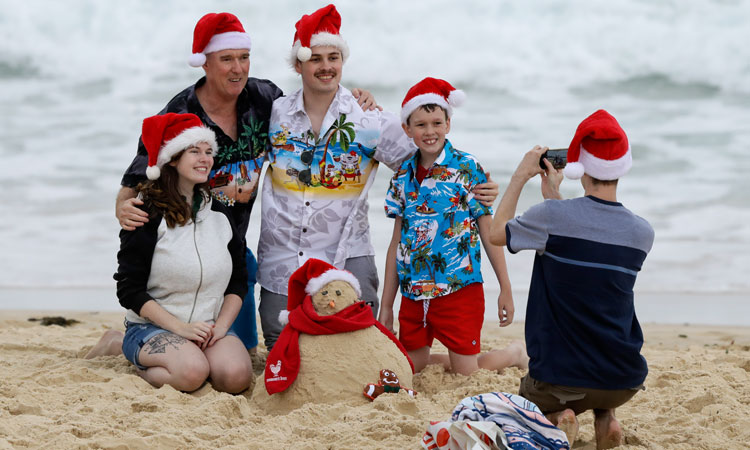 WHO chief Tedros hailed the "heart-wrenching sacrifices" millions were making by staying away from loved ones on Christmas Day, adding that "we must not squander their sacrifices" as he called for people to keep up infection control measures.