UAE Nation Brand draws 1.5m votes from 130 countries in less than a week

Logos up for vote are titled '7 Lines,' 'Emirates in Calligraphy' and 'The Palm.'

Since public voting opened last Tuesday, the UAE Nation Brand has attracted a whopping 1.5 million votes from 130 countries and 2,000 cities to select one of three logos that will represent the UAE globally.

People from the age group 25-34 years old cast over a third of votes (33.5 per cent), while the highest participation rates were drawn from the UAE, India, Egypt, Saudi Arabia, Algeria, Morocco, US, Jordan, Brazil and Iraq.

Arab nationalities cast 73 per cent of votes, while the remaining 27 per cent of votes came from the rest of the world. Since its launch, the voting campaign recorded 50 million social media views.

Online voting began on 17th December for the public across the world to take part in sharing the UAE’s story through selecting one logo of the three, designed by 49 Emirati artists, via the Nation Brand website.

The call for an online vote went viral on social media on the first day of the announcement, with users sharing the logos of their choice and discussing the features of each logo on display.

His Highness Sheikh Mohammed Bin Rashid Al Maktoum, Vice President, Prime Minister and Ruler of Dubai, and His Highness Sheikh Mohamed Bin Zayed Al Nahyan, Crown Prince of Abu Dhabi and Deputy Supreme Commander of the UAE Armed Forces, had invited the public across the globe to participate in choosing the UAE Nation Brand logo that will reflect the country’s unique identity.

The logo will represent the UAE’s exceptional story as a melting pot, land of opportunities, global trade centre, beacon of hope, and a nation with futuristic vision and cultural and historical heritage.

Implementing the country’s humanitarian values, the logo selection process will plant a tree for every vote. The initiative aims to contribute to global efforts to combat climate change, protect the environment, reduce carbon and greenhouse gases emissions, fight desertification, and empower communities in several parts of the world, reflecting the UAE’s values of giving, improving the quality of life and protecting planet resources.

Voting is open for people across the world from 17th December to select one of three UAE logos that ‘Inspiring 49’ from the seven emirates took part in designing. Logos up for vote are titled "Emirates in Calligraphy", "The Palm" or "7 Lines".

The "Emirates in Calligraphy" logo emphasises the unique association and sentiment that the name "Emirates" brings to citizens, residents and visitors coming together from all over the world.

The logo depicts the aesthetics of Arabic calligraphy that reflects authenticity and originality associated with the UAE. The rolling curves of the font capture the flow of ocean waves merging with the sand dunes of UAE’s golden desert, portraying the country’s unique geographical identity. The smooth and harmonious movement of the letters symbolises the constant human and social progress in the UAE as a nation that does not stop growing in the face of challenges and does not believe in the word "impossible." The UAE is a country built on achieving the impossible.

The palm tree has long been associated with the Emirates, forming an indispensable part of its history and distinctive identity as an unconditional giver.

By designing the palm tree with colours closer to golden, the logo manifests the undulating vistas of the desert dunes shining in the sunlight. The elegant lines suggest the radiance, momentum and dynamism of a nation on the move.

Symbolising the willpower of the leaders and people of UAE, palm trees have withstood storms and challenges with strength and firmness. Their powerful branches are as high as the ambitions of the people of UAE, with leaves providing shade and support to millions of people living on the land.

Similar to Canada’s maple leaf and New Zealand’s silver fern, the palm represents the national identity of the UAE and sums up the country’s values of giving, pride, dynamism and ambitions.

Seven lines rise up tall with momentum, optimism and dynamism as a tribute to the seven bold leaders who shaped the Emirates and united their people’s aspirations under one flag. Seven lines, shaping the map of the Emirates with the national colours, represent the future-focused leaders of the seven emirates united towards the country’s growth.

The lines, vibrant in colour, reflect the UAE’s ongoing journey of development driven by a wave of progress, innovation, excellence and boundless aspirations. Designed in the flag colours of black, green and red, the lines are connected with the white colour, symbolising the heart and spirit uniting people of the seven emirates under the main principles of humanity. The unique diversity that enriches the fabric of the UAE society and sets it apart as global hub for entrepreneurship and innovation is featured in the different colours and sizes of the lines.

People across the globe cast their votes on one of three UAE logos displayed on the UAE Nation Brand official website.

Voting for logo of UAE Nation Brand ends on Tuesday

Voting for the logo of the UAE Nation Brand will continue until Dec.31, marking the end of 2019. 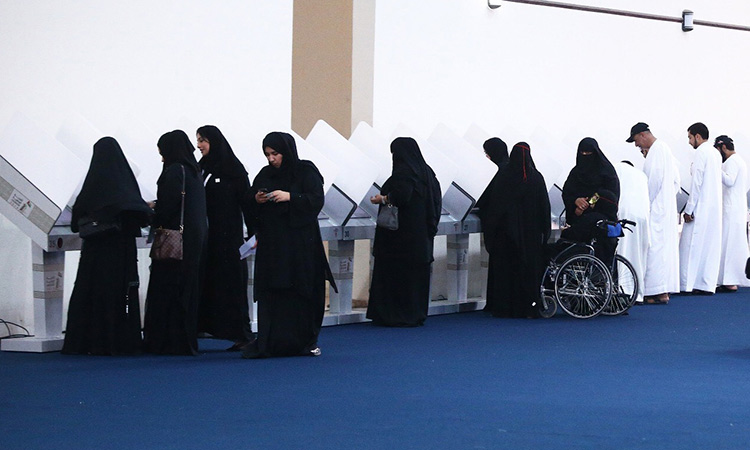