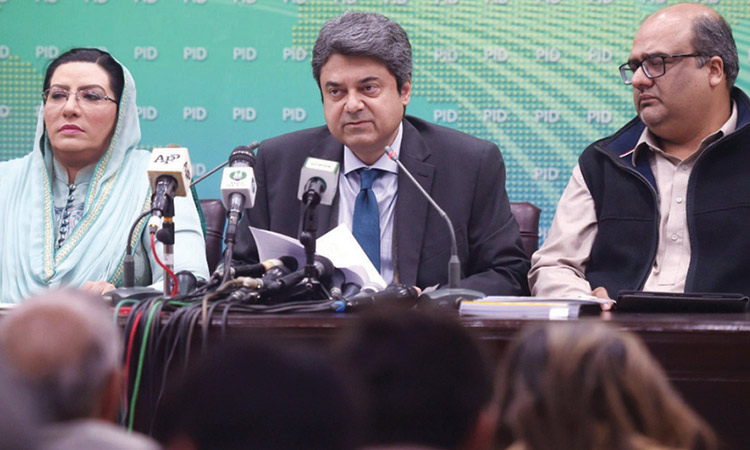 Farogh Naseem speaks during a press conference with Shahzad Akbar and Firdous Ashiq Awan in Islamabad on Wednesday. Agence France-Presse

Tariq Butt
The federal government and military authorities have given an angry response to the special court verdict that awarded death sentence to retired general Pervez Musharraf and decided to file a reference against Peshawar High Court Chief Justice Waqar Ahmed Seth in the Supreme Judicial Council (SJC), besides challenging the judgment in the Supreme Court.

Justice Seth headed the three-judge special court. Both the government and the army expressed ‘anger’ over a specific paragraph 66 of the detailed judgement and termed it “unlawful,” “inhuman” and “unconstitutional.”

Para 66 of the verdict read: “We direct the law enforcement agencies to strive their level best to apprehend the fugitive/convict Pervez Musharraf and to ensure that the punishment is inflicted as per law and if found dead, his corpse be dragged to the D-Chowk in front of the Parliament House, Islamabad, Pakistan, and be hanged for three days.”

The government decided to move the SJC and file an appeal against the verdict during a meeting of the ruling Pakistan Tehreek-i-Insaf (PTI) strategic committee, chaired by Prime Minister Imran Khan after his telephonic conversation with Chief of the Army Staff Gen Qamar Javed Bajwa.

The government’s decision to go against the special court verdict and its author Justice Seth was revealed by Law Minister Farogh Naseem, Special Assistant to the Prime Minister (SAPM) on Information Dr Firdous Ashiq Awan and SAPM on Accountability Mirza Shahzad Akbar at a joint press conference.

Military spokesman Maj Gen Asif Ghafoor, while referring to certain parts of the verdict, vowed to thwart the “enemy design” and defend the institutional dignity. “The verdict, especially the words used in it, is against humanity, religion, culture and our values,” he said, adding that the army’s response plan to the threat was also in place.

Without elaborating the institutional response to the sinister “design,” he said that conspiracies of the “anti-state elements” both “internal and external” would be foiled.

Law Minister Naseem said the government had a ground to file a reference against the PHC chief justice because there was a verdict of former chief justice of Pakistan Iftikhar Mohammad Chaudhry that “incompetence is a ground of misconduct.”

Terming the decision against the former president “unprecedented and despicable,” the law minister said: “This is an attempt to take Pakistan into dark ages.”

To a question whether the special court’s verdict will stand invalid if the SJC gives its decision against the PHC chief justice, he skipped it and only said “no comments.”

However, Awan said at the fag end of the press conference: “In that case the verdict will stand null and void.”

Naseem said the federal government would plead before the SJC that the PHC chief justice was “mentally unfit” and “incompetent” and, therefore, he should be restrained from giving important decisions as head of the high court or judge of the Supreme Court.

A Lawyers’ premier forum, the Pakistan Bar Council (PBC), has objected to the insulting criticism of the judgement of the special court which convicted Musharraf to death.

In a statement, the PBC said that the law had provided procedures and proper course for agitating flaws, if any, but the way in which the judgement was criticised gave an impression that there was no respect for any other forum, including the judiciary.

If there are some flaws in the judgement of Musharraf’s case, in the opinion of the director general of the Inter-Services Public Relations (ISPR), the law has provided, procedure and proper course for agitating such flaws, if any, before the higher judicial forums by way of appeal, revision or constitutional petition but the manner and the way, in which, the judgement of the special court has been criticised by an official of the army clearly gives an impression that all the institutions in Pakistan are subservient to the armed forces, to follow its dictation and there is no respect for any other forum including the judiciary,”said the statement jointly issued by the PBC vice chairman Syed Amjad Shah and chairman of its executive committee Sher Mohammad Khan.