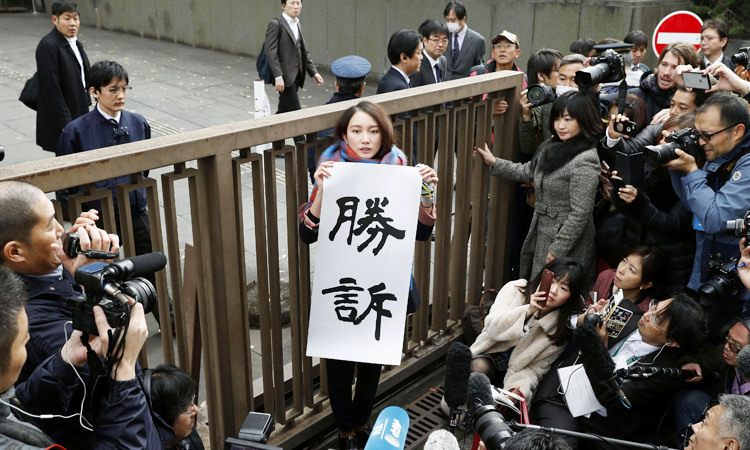 Shiori Ito holds a banner reading “Victory” outside the Tokyo District Court after a court verdict ordered in Tokyo on Wednesday. Kyodo/Reuters

A Japanese court on Wednesday ordered a prominent reporter to pay damages to a female journalist in a civil lawsuit over her allegations he raped her, a verdict welcomed by women’s rights advocates in a country where sexual assault victims often stay silent.

The Tokyo court ordered television journalist Noriyuki Yamaguchi to pay 3.3 million yen ($30,375) in damages to Shiori Ito, a freelance journalist who has become a well-known face of Japan’s #MeToo movement.

Ito, 30, had sought 11 million yen in damages for her suffering after prosecutors declined to indict Yamaguchi following her complaint to police that he had raped her while she was unconscious.

The court also ruled against a counter-suit by Yamaguchi, who has repeatedly denied the allegations, in which he sought 130 million yen in damages from Ito. 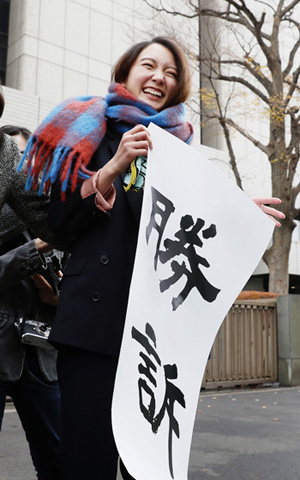 Yamaguchi told a news conference that he would appeal the verdict, saying he had done nothing illegal.

Ito made waves in 2017 when she took the rare step of going public with allegations that Yamaguchi, a senior television reporter known for his reporting on Prime Minister Shinzo Abe, had raped her in 2015 after she met him for drinks to discuss an offer to help her find a job.

The court said in a summary of the verdict that the credibility of Ito’s account, in which she said she was forced to have sex while unconscious and despite resisting after she regained consciousness, was relatively high.

It also said there were grave doubts about the credibility of Yamaguchi’s statements, in which he said the sex was consensual.

Ito fought back tears as she spoke through a megaphone to reporters and supporters outside the court, saying she felt “full of gratitude.”

“I’m so happy,” she said, her voice breaking at times with emotion. “It’s not over. Now, I have to deal with how I live with my scars.”

In awarding the damages, the court said that Ito still suffered flashbacks and panic attacks as a result.

The court also said Ito’s decision to go public was intended to be in the public interest and did not violate Yamaguchi’s privacy.

Sexual assault victims in Japan often shy away from reporting incidents to police or even telling friends, government data shows, for fear of being blamed and humiliated.

“I think that the voices of victims affected the ruling,” Kitahara told Reuters. “I am hopeful if people speak out, things will change.”

Ito suggested in her book “Black Box” that she might have been given a “date rape” drug but that she had no way to know.

Yamaguchi wrote in a magazine article in 2017 that he had “neither seen nor heard of the date rape drugs” Ito mentioned and that she had been “overconfident about the amount of alcohol and drank too much.”

Ito also wrote in her book that she was forced to re-enact the alleged rape with a life-sized doll while male police watched. She did not identify the policemen.

Reuters could not confirm this incident, which was not touched upon in the summary of the court ruling. A spokesman for the Tokyo Metropolitan Police said the department could not immediately comment.

Ito has said she was also trolled on social media by critics.

The events formed the subject of a BBC documentary, “Japan’s Secret Shame.”

Ito wrote in her book that police had obtained an arrest warrant against Yamaguchi but it was not implemented.

She also wrote that the arrest was called off at the last minute by a senior police official, whom she did not identify.

Ito was an intern at Reuters during the time she said the rape occurred. She left Reuters in June 2015.

Prosecutors later decided not to bring charges. They do not give reasons for such decisions.

A civil judicial panel later rejected Ito’s appeal to force a prosecution, saying it had found no grounds to overturn the prosecutors’ decision.

At the time, opposition lawmakers questioned whether Yamaguchi had received special treatment because of his close ties to Abe.

Chief Cabinet Secretary Yoshihide Suga has denied there were any irregularities regarding the case.

The head of the National Public Safety Commission, which oversees the police, also denied in parliament that there were any problems with the investigation, media reported at the time.

Legislators revised Japan’s century-old rape law in 2017 to include harsher penalties, including raising the minimum punishment for rapists to five years in prison from three.

The reforms, however, left intact controversial requirements that prosecutors must prove violence or intimidation was involved or that the victim was “incapable of resistance,” prompting calls from academics, activists and psychiatrists for further changes to the law.