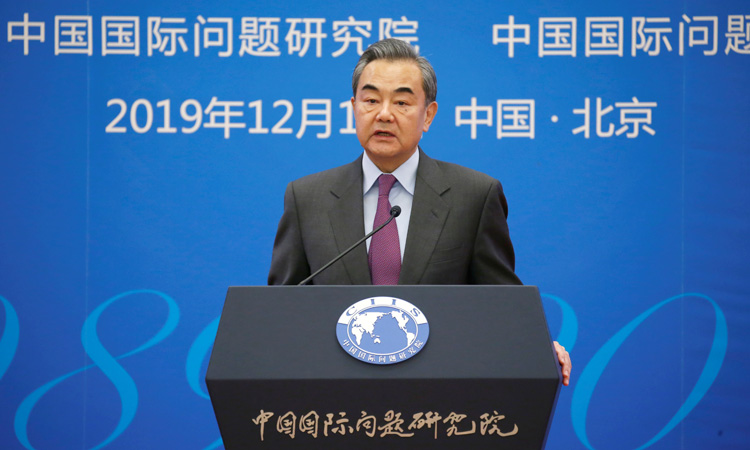 Wang Yi delivers a speech at an annual symposium on international situation and China's diplomacy in Beijing on Friday. Jason Lee/ Reuters

Senior Chinese diplomat Wang Yi said on Friday that the United States had seriously damaged the hard-won mutual trust between the countries by criticising Beijing over issues such as Hong Kong and the treatment of Muslim Uighurs.

Wang, who is China's foreign minister, said there were deep-seated issues that need to be addressed and resolved between both sides, issues that are bringing increasingly severe challenges to the future of the countries' relationship.

Wang was speaking at an annual symposium in Beijing on international affairs and China's diplomacy.

Bilateral tensions over issues such as the protests in Hong Kong and Beijing's treatment of its Uighur Muslim minority have flared in recent months, just as both countries tried to work out a deal to end a trade war.

The US recently introduced several pieces of legislation that could potentially target top Chinese officials with sanctions over human rights abuses in Hong Kong and Xinjiang.

Beijing has strongly condemned the legislation which it says represents serious interference in its domestic affairs.

Wang said on Friday that China will “resolutely fight against external forces that interfere in Hong Kong's affairs” and “sever the black hands” supporting revolution in Hong Kong.

Last month, China called on the US military to stop flexing its muscles in the South China Sea and to avoid adding “new uncertainties” over Taiwan, which is claimed by China.

Wang said the United States had used various international occasions to vilify China's social system, development path, and mutually beneficial cooperation with other countries, and charged China with all kinds of unwarranted crimes.