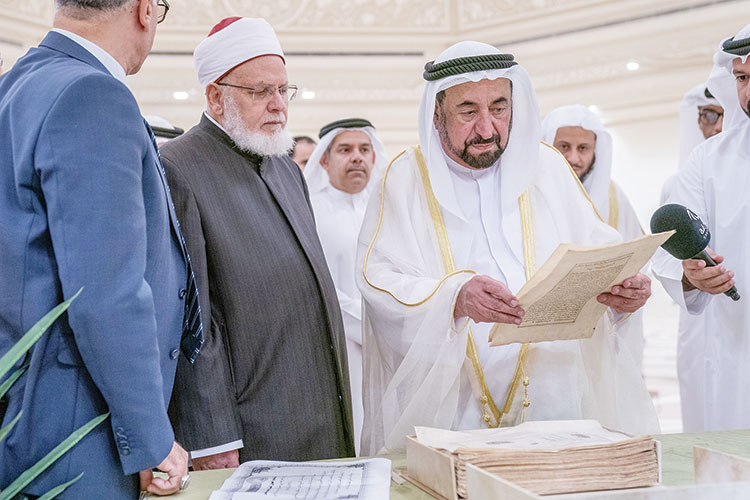 The second manuscript is one of the first books printed in the Arabic language in the world and dates back to 672 AH and 1274 AD.

The first manuscript is entitled ‘Books of Law in Medicine’ by Abu Ali, Al Hussein bin Abdullah Bin Al Hassan Bin Ali Bin Sina, Al Balkhi and then Al Bukhari, and dates between 370 and 428 AH 980 and 1037 AD and is the first Arab edition in the world to write law books in medicine.

The second manuscript bears the title, ‘The Editing of the Fundamentals of Engineering and Accountability by Euclid’ by Abu Ja’far Muhammad bin Muhammad bin Al Hassan and Nasiruddin Al Tusi, and is one of the first books printed in the Arabic language in the world and dates back to 672 AH and 1274 AD.

The book consists of 13 chapters, six of which deal with level engineering and four deal with mathematics, preparation theory, and three with classes in engineering.

The Ruler of Sharjah also launched the website of the Islamic Manuscripts House, which includes information about the house. Sultan listened to a detailed explanation about the services and features contained in the website, which offer researchers and specialists the best technical ways to benefit from the rarest manuscripts included in the house.

The website has many advantages, including its unique design, which includes a virtual tour with 3D 360-degree photography technology, which takes the visitor on a tour of the facilities of the house through a screen. It also provides the visitor with a chance to communicate with officials from the house about any manuscript available through the page, “Ask the house administrator”.

The Islamic Manuscripts House website also has an electronic alphabetical index that enables the researcher to sort and search for manuscripts, and to classify manuscripts according to the first letter of the manuscript title or the first letter of the author’s name. The website also features the provision of a virtual keyboard to write in the search engine in Arabic, to facilitate the search for manuscripts for those from foreign countries who do not have the Arabic language on their computers.

After cutting the ribbon, Dr. Sheikh Sultan toured the college, familiarising himself with the contents of the classrooms and modern educational methods in the various sciences of the Holy Quran.

He reviewed the Quran memorisation hall and reading studio, which includes the latest audio technology to train students and record various readings of the Holy Quran.

The Ruler of Sharjah visited the theatre of the college and was acquainted with its techniques and equipment and listened to verses being recited from the Quran for one of the college students. He also visited the college library, which includes a valuable collection of books specialised in the Holy Quran.

Sheikh Sultan attended the opening of the fifth Sharjah Desert Theatre Festival at Al Kuhaif area, on Thursday evening. The Festival is organized by the Department of Culture and will continue until December 16.

The opening ceremony began with the arrival of  the Ruler of Sharjah, where he was received by senior officials and a number of theater artists from UAE, Arab countries and a large audience and visitors to the desert areas. His Highness and the attendees watched the opening show of the Emirati play “Mataya Al Bayan”, wrttien by Faisal Jawad, Directed by Mohamed Al Amri and produced by the Sharjah National Theater with participation of a group of Emirati theater artists.

The opening was followed by the “Al Faza’a” play by Sharjah National Theater, with participation of a group of Emirati theater artists. 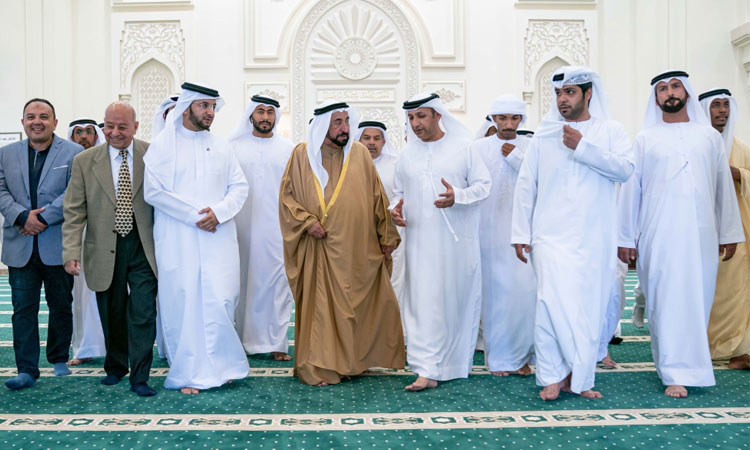