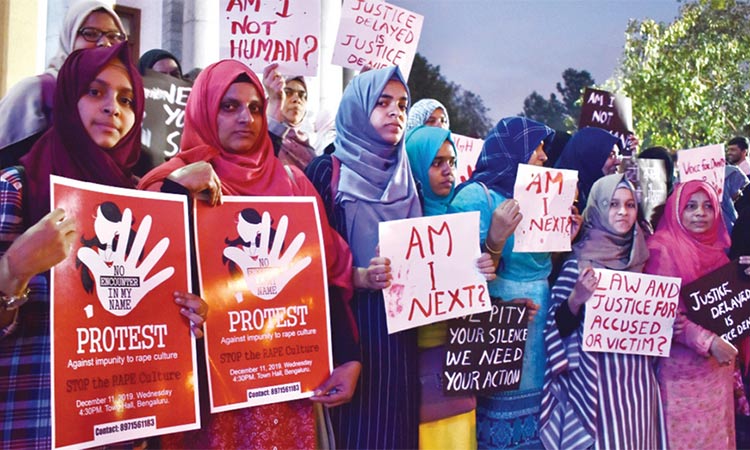 Activists protest against rapes and murders of women in Bengaluru on Wednesday. Agence France-Presse

The Supreme Court (SC) on Thursday constituted an inquiry commission headed by former Supreme Court judge VS Sirpurkar, former Bombay High Court judge Rekha Baldota and former CBI director DR Karthikeyan, to conduct an inquiry into the ‘encounter’ killing of the four accused in the rape and murder of a veterinarian in Hyderabad.

A bench headed by Chief Justice SA Bobde and comprising Justices SA Nazeer and Sanjiv Khanna said, “The commission will complete the inquiry in six months...and the chairman of the commission shall fix the first date hearing at Hyderabad.”

The Supreme Court also stayed proceedings initiated by Telangana High Court and National Human Rights Commission into the Hyderabad encounter. The top court said that no other courts should entertain any plea pertaining to the case.

The top court grilled senior advocate Mukul Rohatgi, representing the Telangana government, on many aspects of the alleged encounter of the accused by the state police, and emphasised there should be an independent and unbiased inquiry into this incident.

The apex court also asked the state officials to show the medical report of the injured policemen in the incident. “Why would they use stones, if they have pistols? Where is the cartridge? Who recovered it? Where are all those things kept?” reiterated the Chief Justice.

The Chief Justice asked Rohatgi, “Are you prosecuting the policemen?” He replied, no, as there is no reason to prosecute them at this moment. Chief Justice replied, “People should know the truth. We may order their prosecution right away. Don’t resist an inquiry.”

The Chief Justice said that the trial against accused in this case is of no consequence since all four are dead now. “They can’t present their case at all. The policemen will give their evidence. Be more fair... otherwise the trial will end up being a mockery,” said the Chief Justice.

The court observed that a suggestion was to restrain the media from publicising the proceedings of the inquiry commission and making comments in relation to the inquiry. “We accordingly issue notice to Press Council of India,” said the court.

Meanwhile, Bihar is fast turning into a graveyard for girls with many of them being killed allegedly by their own family members or their lovers.

In a horrific incident, a pregnant girl was burnt to death allegedly by her boyfriend at a village under Sikarpur police station in Bihar’s West Champaran district on Tuesday.

West Champaran Superintendent of Police, said, “The two had a love affair. The girl claims to be one-month pregnant. She was pressing for the marriage. Enraged by the continuous pressure, the accused boy set her on fire. The girl succumbed to injuries in the hospital.”

Ghastly incidents of sexual assault on women have been reported from other parts of the state as well.

A girl was allegedly set on fire after she resisted a rape attempt in Bihar’s Muzaffarpur district just two days ago. The 23-year old victim sustained 60 per cent burns and is currently fighting for her life in a hospital.

According to the girl’s mother, a boy was stalking her for three years. A complaint was registered with the Ahiyapur police station, but the police did not take any action.

The police said that the accused Raja Raj has now been arrested and further action is being taken against him.

In another grisly incident, a woman was burnt to death in alleged honour killing by her own family members in Bihar’s Buxar district.