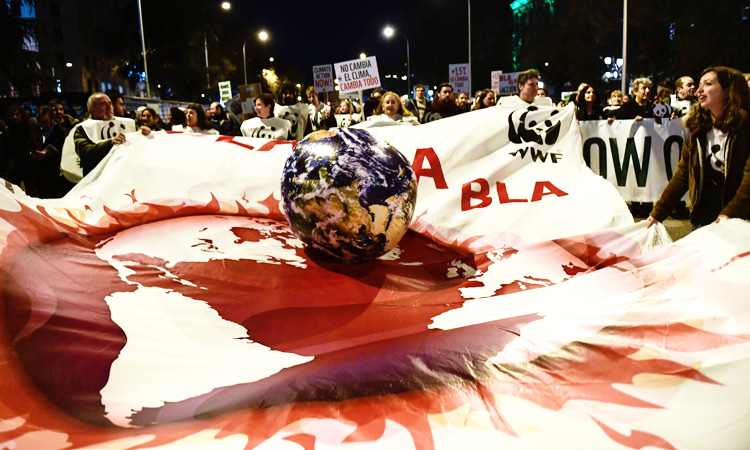 Delegates are gathered in Madrid negotiating how to implement the Paris pledges. Cristina Quicler/ AFP

Oil and gas groups were accused on Saturday of seeking to influence climate talks in Madrid by paying millions in sponsorship and sending dozens of lobbyists to delay what scientists say is a necessary and rapid cut in fossil fuel use.

A day after tens of thousands marched in the Spanish capital demanding climate action, seven environmental groups raised concerns to AFP over the role of fossil fuel representatives at the COP25 summit.

Under the 2015 Paris Agreement, nations agreed to limit global warming to “well below” two degrees Celsius (3.6 degrees Fahrenheit) and as close to 1.5C as possible. 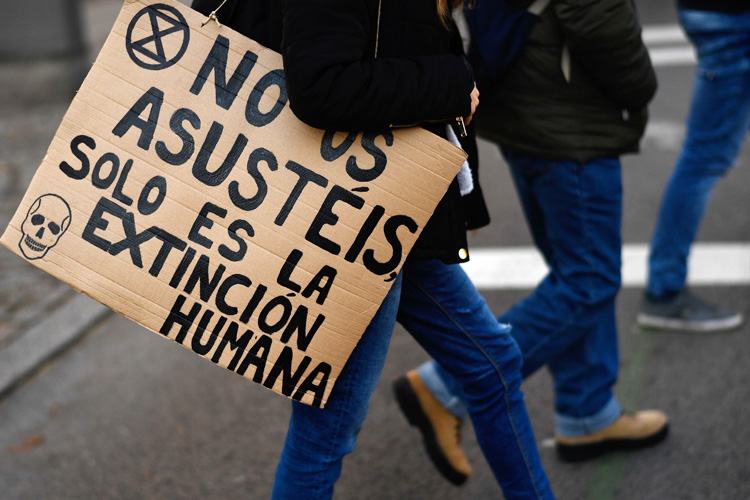 Tens of thousands marched in the Spanish capital Madrid to demand climate action at the UN talks.

Delegates are gathered in Madrid negotiating how to implement the Paris pledges. The summit was moved at short notice after domestic unrest forced original host Chile to cancel.

Spanish energy giants Endesa and Iberdrola stepped in to sponsor the conference, which brings together more than 20,000 negotiators, scientists, NGOs and journalists from around the world.

AFP has been told that each company paid 2 million euros to be COP25 “Platinum” sponsors, affording them prominent branding and trade stalls at the event. 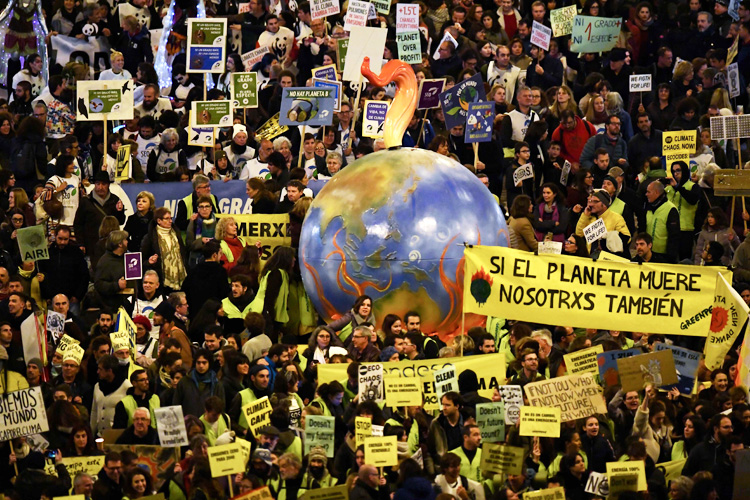 Demonstrators with a balloon in the shape of the Earth take part in a mass climate march in Madrid on Friday.

Neither group nor organisers confirmed the exact cost but their sponsorship of a conference designed to reach consensus on how to cut emissions drew allegations of “greenwashing” from observers.

“Bankrolling the global climate negotiations is a classic trick from the polluter’s playbook,” said Jean Su, energy director with the Center for Biological Diversity.

“For just a fraction of yearly profits, big polluters are able to wrap themselves in the branding of the COP and use this access to influence the negotiations,” added Sriram Madhusoodanan of the Corporate Accountability watchdog. 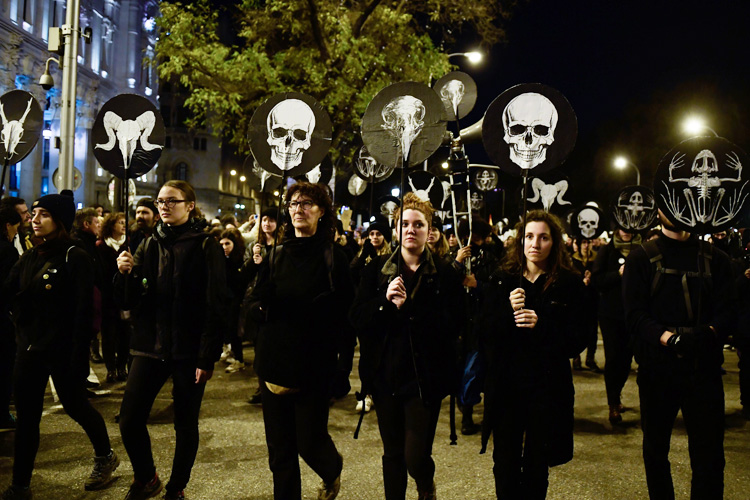 Demonstrators hold skull masks during a mass climate march in Madrid on Friday.

When COP25 opened on Monday, many Spaniards woke up to advertisements from Endesa splashed across the front pages of national newspapers.

An Endesa spokeswoman told AFP that it was “a marketing action” and denied greenwashing.

“Our objective is to always do better and we are accelerating our energy transition,” she said.

Iberdrola and the conference organisers did not respond to queries over sponsorship. 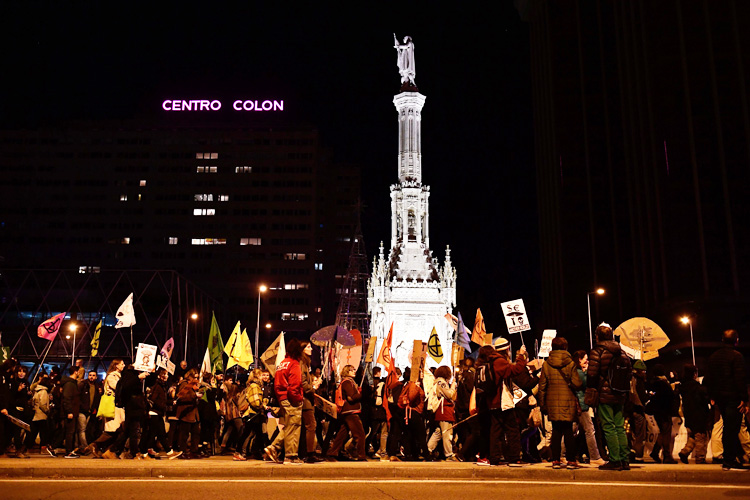 Demonstrators take part in a mass climate march to demand urgent action on the climate crisis from world leaders attending the COP25 summit in Madrid on Friday.

They frequently host networking meetings or presentations and have the same status and access permits at negotiations as environmental charities.

While few oil and gas majors participate directly in UN talks, they are well represented in Madrid by the trade organisations they partner.

One such group is the International Emissions Trading Agency (IETA), which counts among its members energy giants such as BP and ENI. 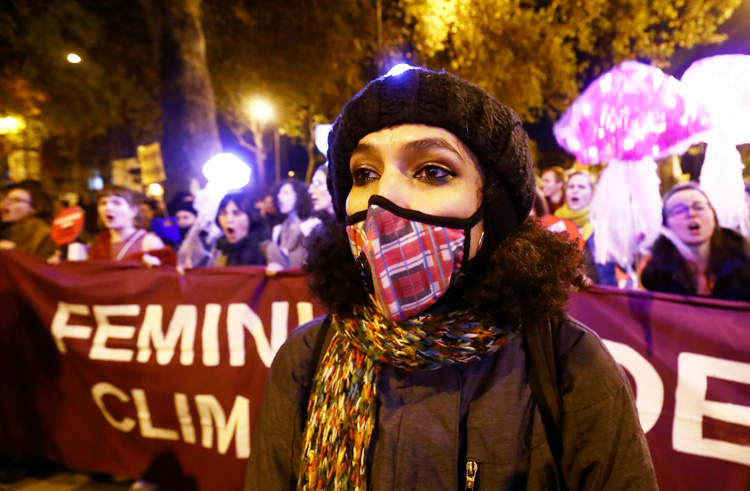 It also represents Iberdrola and Endesa’s parent company Enel, and is holding a total of 74 side events during COP25.

According to an official participants list IETA has sent 141 people to Madrid -- more than the entire European Union’s delegation, and larger than that of host Chile.

“IETA supports the UNFCCC’s goals and objectives for climate protection -- which are a core part of our mission,” CEO Dirk Forrister told AFP.

“We also respect UNFCCC’s rules and procedures, including its guidelines for observer participation.

“Our members observe UN climate negotiations, because they are serious about bringing business solutions to the climate challenge,” he added.

IPIECA, another trade group, has a smaller delegation in Madrid containing representatives from Chevron, ENI and Petrobras. 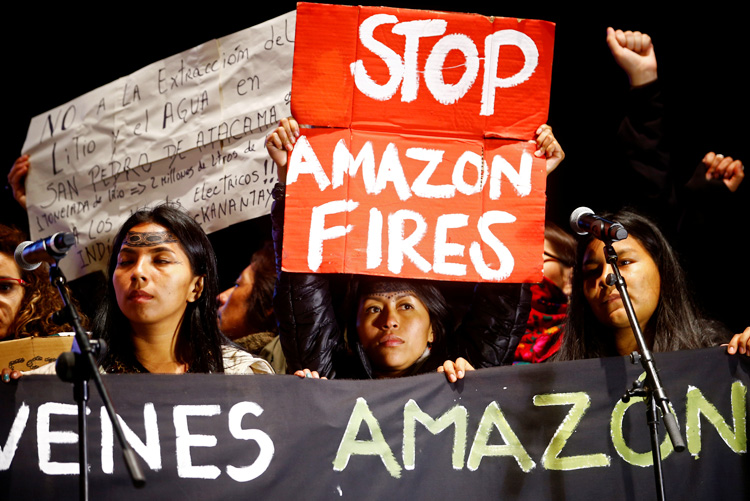 Unlike parallel UN processes, there is currently no protection in the UNFCCC against potential conflicts of interest between nations which need emissions slashed rapidly in order to survive, and the biggest emitters whose business plans are still heavily reliant on fossil fuels.

Thousands of energy reps have attended climate talks since 1990.

“We’re seeing yet again how the interests of dirty energy corporations are being put before the needs of vulnerable people and the planet,” she told AFP.

“It’s just common sense that those who are causing the climate crisis need to be kept far away from the political process meant to solve it.”

UN climate change secretary Patricia Espinosa said that “everyone” needed to be involved in transition away from fossil fuels.

“There is no way we will this transformation without the energy industry, including oil and gas,” she said on Friday. 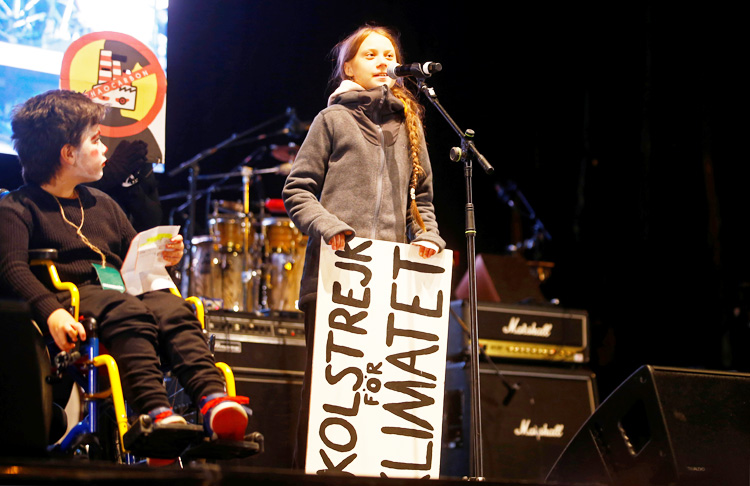 Greta Thunberg delivers a speech at a climate change protest march, as COP25 climate summit is held in Madrid on Friday.

The UN last year said “no particular interest group influences the decision-making process” at climate talks, adding that it takes the issue of conflict of interest “very seriously.”

Yet during annual mid-session climate talks in Germany in June, AFP obtained proof that hours of discussions on the subject were omitted from the final conference record.

A collection of 47 developing nations submitted a proposal to draw up provisions to protect against conflict of interest, observers said.

The proposal was opposed by the United States, Australia and the EU among others, yet no reference of it appeared in final discussion summaries.

Another trade group present at COP25 is the Edison Electrical Institute (EEI), which represents dozens of power firms in the US and around the world.

Internal GCC documents compiled by the Climate Investigations Centre showed this year how the group used UN talks to further its members’ agenda.

The documents detail how the GCC pushed to influencing policymakers, including in discussions with the UN’s Intergovernmental Panel on Climate Change (IPCC), to tone down the links between man-made emissions and global warming.

The GCC disbanded in 2002 after growing disputes among its members over how to respond to advances in climate science, yet organisations it represented are still present at UN talks.

This includes EEI, which has sent more than 200 delegates to negotiations since 1995.

“We and our members understand that addressing the impacts of climate change in the areas of mitigation and adaptation requires a global response,” an EEI spokesman told AFP.

“Our hard work and determination is easily overpowered by the vast resources of the biggest polluting corporations,” said Sarah Dobson, from the UK Youth Climate Coalition.

“These companies are destroying our planet and our right to fair climate negotiations free from their influence.” 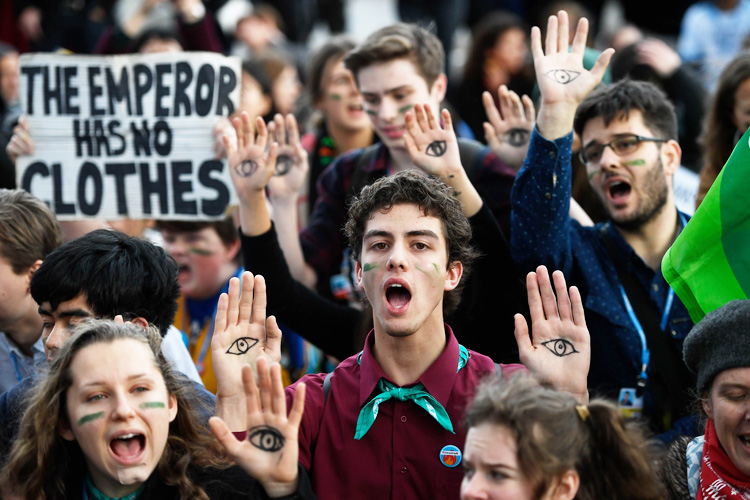 United Nations climate negotiations were deadlocked deep into overtime and through the night, with even the best-case outcome likely to fall well short of what science says is needed to avert a future ravaged by global warming. 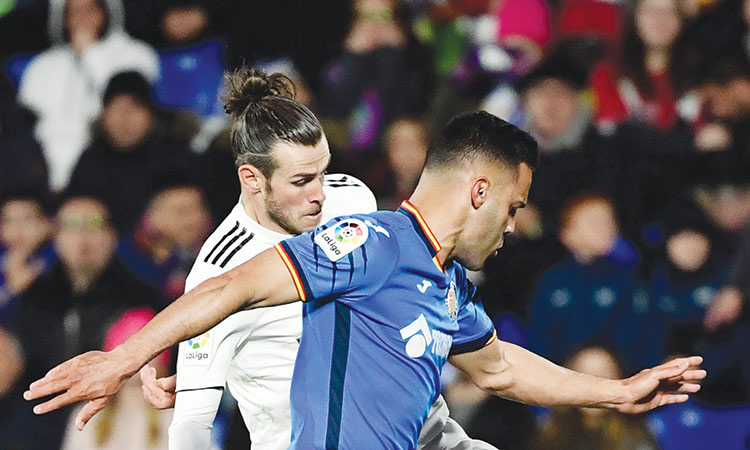 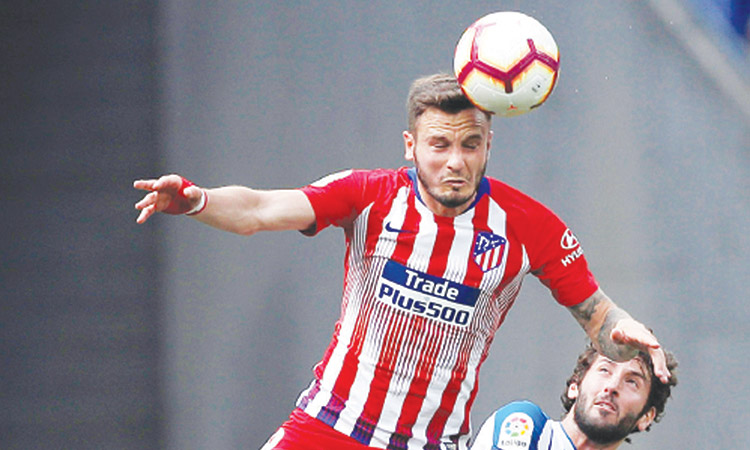